They can be heroes: hundreds of guitarists strike a chord for brain tumour cure 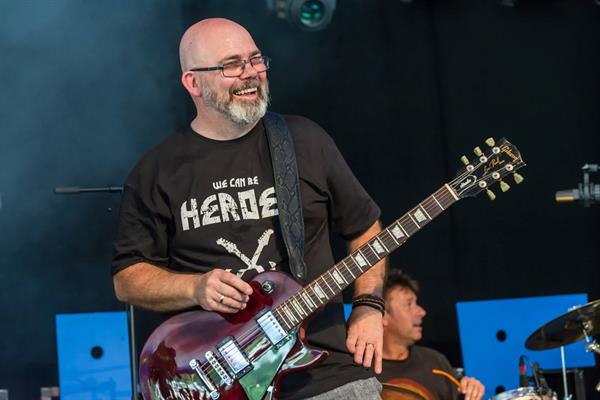 An Aylesbury carpenter bereaved by a brain tumour has organised a huge electric guitar ensemble to raise funds to help scientists find a cure for the disease.

Many of those involved in the challenge have been affected by a brain tumour. Dave’s mum June Pile, died in March 2013 following a short and gruelling battle with a glioblastoma multiforme (GBM), a highly aggressive type of tumour.

Dave said: “I’ve been raising money for the Brain Tumour Research charity over the last year or so but this latest venture was definitely the toughest! It was great to raise awareness of this dreadful disease in such a unique way and I’m grateful to all the guitarists who took part.”

Aylesbury has a historic connection with Bowie, with a statue in the Market Square honouring the star, who performed his first show as Ziggy Stardust in the town. Guitarists came from as far afield as Germany and Ireland to take part in the noisy fundraiser. The electric ensemble was accompanied by David Bowie tribute The Thin White Duke, adding a glimmer of stardust to the day.

Scott Fuller, lead singer of the band, said: “To begin with, the prospect of leading a performance with potentially hundreds of guitarists, seemed like it would be great fun.  Then we learned of the Brain Tumour Research charity and knew we just had to be involved.  It seemed the least we could do. David Bowie's ‘Heroes’ - a triumph of hope over adversity - was the perfect song choice.”

Julia Krajewska, a backing vocalist and guitarist in the band added: “It was great to perform with a mass of guitarists all raising money for a very worthy cause. The atmosphere was electric and I was thrilled to take part in such a unique event.”

Michael Thelwall, Head of Community Fundraising for the Brain Tumour Research charity, said: “The Great Guitar Challenge was spectacular. We needed 450 musicians to break the record so didn’t manage it this time but we’re already thinking about repeating the event next year.

“It was a novel way to raise awareness of brain tumours which kill more children and adults under the age of 40 than any other cancer. We are very grateful to all the guitarists who took part in the challenge, which was a noisy reminder of just how many families are affected by brain tumours.”

To donate to the Brain Tumour Research charity, go to:  https://www.braintumourresearch.org/donation/donate-now

The Brain Tumour Research charity is a powerful campaigning organisation and represents the voice of the brain tumour community across the UK. We helped establish and provide the ongoing Secretariat for the All Party Parliamentary Group for Brain Tumours (APPGBT). We are supporting the crucial APPGBT 2018 Inquiry into the economic and social impacts of brain tumours and will publish their report in the autumn.
We are also a key influencer in the development strategy for the Tessa Jowell Brain Cancer Mission.