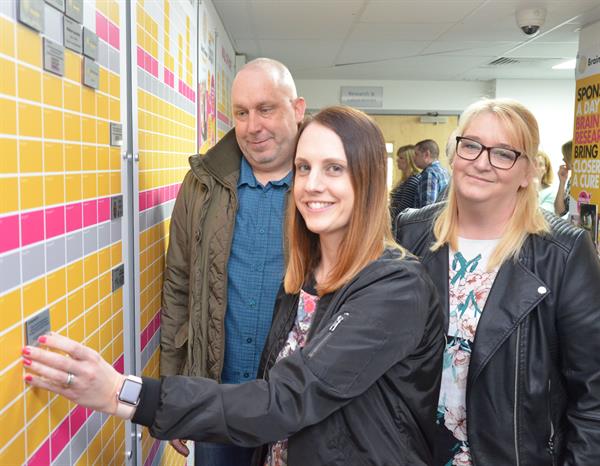 A police officer has raised thousands of pounds to fund scientific research into finding a cure for brain tumours.

Inspired by this Katy set about raising money to help by taking part in the Taunton Half Marathon earlier this month and last year’s Great South Run.

Katy’s fundraising was acknowledged on Wednesday 11th April when she visited the Brain Tumour Research Centre at Plymouth University’s Peninsula School of Medicine and Dentistry. Accompanying her were friend and colleague PC Jim Murray, 51, who is undergoing treatment for a grade four glioblastoma multiforme (GBM), the most aggressive type of brain cancer. Jim, who has three sons and two grandchildren, was Katy’s mentor when she started her police career 15 years ago.

Her fundraising, which has now reached more than £4,000, was also inspired by John Heath, aged 87, who died just three weeks after his diagnosis a year ago. John was also a Bridgwater resident as are Jim and his wife Ally.

Along with Jim and his wife Ally, Katy met researchers at the centre, one of four funded by the charity, where the work is focused on improving treatments for patients and, ultimately, finding a cure.

Katy placed a tile on the Wall of Hope representing the £2,740 it costs to fund a day of research. She said: “It’s lovely that Jim and Ally are able to come and see first-hand the research that is underway. I feel really proud to have raised enough to contribute to something so important. Just being at the research centre and seeing what they are doing really draws attention to the cost of research and work that needs to be conducted to find a cure for brain tumours.”

According to Brain Tumour Research, less than 20% of those diagnosed with a brain tumour survive beyond five years, compared with an average of 50% across all cancers.

Emma Cronin, Community Fundraising Manager for Brain Tumour Research, said: “We are really grateful to Katy for raising vital funds to support important research into a disease which affects so many people and their families each year. Stories like Jim’s and John’s remind us all that we cannot allow this desperate situation to continue.”