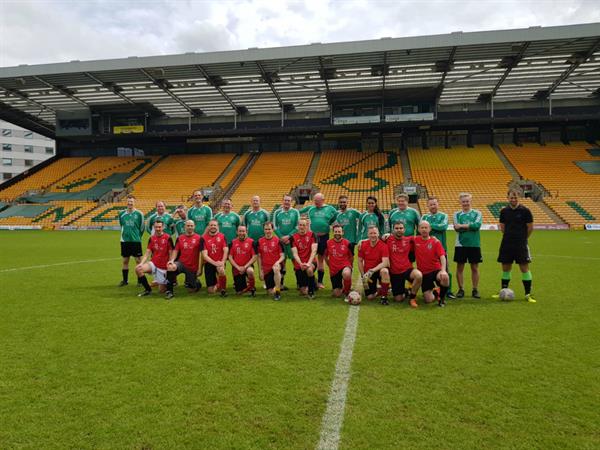 Money raised from a charity football game at Carrow Road will help scientists find a cure for brain tumours.

The match, which raised £5,179 for the pioneering charity Brain Tumour Research, was held on Saturday 12th May in memory of Canaries fan Edward Morrison who died in January, aged 41, less than four years after being diagnosed with the disease.

Edward, who was also known as Andrew or Geordie, was a lifelong fan of the club and a regular at the ground even when, in later years, his career as an energy trader saw him living and working in Germany.

It was one of Edward’s last requests for there to be a fundraising match to help other patients and the game, which involved family and friends, means his brother Pete, who lives in Norwich, has been able to make this dying wish come true.

Edward was diagnosed with a low-grade tumour in 2014 and underwent two operations followed by chemotherapy and radiotherapy. However, in August 2017, Edward received the devastating news that the tumour had become aggressive and was now classified as a grade four glioblastoma multiforme (GBM).

Further treatment was unsuccessful and Edward passed away on 7th January in a hospice in Dusseldorf, Germany, where he lived and worked.

Pete said: “Edward was a huge fan of Norwich City FC and used to go to their matches regularly, so hosting the event here at Carrow Road has been a perfect way to commemorate him. He was such a fun-loving guy and he’s left such a big hole in so many lives.

“One of Edward’s last requests was that we organise a football game in his memory as, even in his illness, he wanted to raise funds for research into brain tumours. Although it was too late for him, he was determined to prevent others from suffering from this devastating disease. We’ve raised over £5,000 so far and would be thrilled with any further donations.”

Also in attendance was Edward’s friend, Angus Cameron, who broke his leg last month in the final kilometre of the London Marathon. Angus, who was also raising funds for Brain Tumour Research, was on track to complete the race in less than three hours when his femur broke in the final straight.

Michael Thelwall, Community Fundraiser for Brain Tumour Research, said: “For too long, brain tumours have been a neglected cancer. Stories like Edward’s remind us all that we cannot allow this desperate situation to continue.

“We are extremely grateful to Pete for organising such a fantastic event and to Edward’s family and friends for helping to fundraise. The money raised will go towards Brain Tumour Research’s network of dedicated Centres of Excellence where scientists are focused on improving outcomes for patients and, ultimately, finding a cure.”

To make a donation to Brain Tumour Research via Pete’s JustGiving page go to https://www.justgiving.com/fundraising/edwardandrewmorrison