Hundreds inspired to Run for Gem 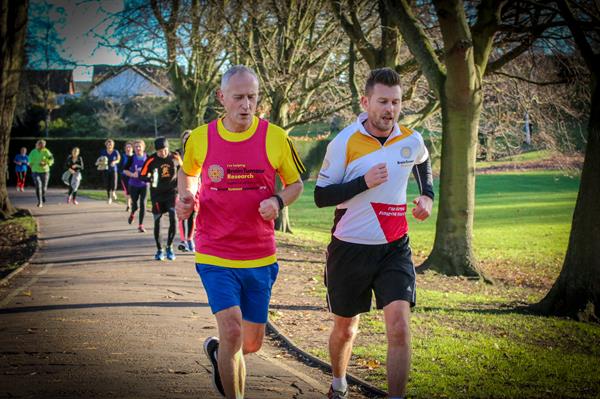 Runners turned out in their hundreds to Run for Gem at Colchester’s Castle Park on Saturday morning, 8 December, raising more than £4,000.

The 5K run which was inspired by Colchester’s Gemma Edgar, currently receiving end-of-life care at St Helena Hospice, began and ended at the bandstand, where close to 300 participants’ flagging energy was boosted with cake in return for donations to the Brain Tumour Research charity and St Helena Hospice.

Gemma Edgar, 33, formerly a paediatric nurse at Colchester General and mum to four-year-old Noah and Dylan, six, was diagnosed at the age of 29 with an aggressive and incurable glioblastoma (GBM) brain tumour. Her friend Cara Greenley organised Run for Gem, having been shocked to learn that brain tumours kill more children and adults under the age of 40 than any other cancer, yet historically just 1% of the national spend on cancer research has been allocated to this devastating disease.

Cara, 33, of the Willows, Colchester, who first met Gemma when they were 13-year-olds at St Helena School, said: “It seemed very appropriate to organise Run for Gem as Gemma really enjoyed running, including doing the Castle Park Run whenever she could and we both ran the London Marathon this year.

“Saturday was absolutely phenomenal – beyond my wildest dreams! I had originally envisaged about 20 runners, but with Running Colchester getting behind the event, we ended up with hundreds and have raised around £4,200 with more donations coming in even today.

“I was a marshal on the day, helped by a team of Running Colchester supporters, and to see the sea of people pounding past was stunning. I particularly want to thank Running Colchester, everyone who donated cakes and Gemma’s family for their incredible support. It was very special seeing Gemma’s dad and brother Andy and Lee Relf taking part.”

Andy said: “Gemma got into running after she was diagnosed as something good for her mental health as well as her physical well-being. The big bonus which she hadn’t anticipated was the amazing community she entered into. All the runners got behind her and their love and support spurred her on and meant so much to her. This was demonstrated in huge proportions to the family on Saturday with people who don’t even know Gemma, but who had been touched by her story, taking part. It means so much to Barbara (Gemma’s mum), Lee and me and gives us strength too.”

Lee, who along with Cara said a few words before the start on Saturday, said: “I was so proud to see how many people had been inspired by my sister to take part and grateful to everyone who helped raise such a fabulous amount for two very worthy causes. I also want to give a huge vote of thanks to Cara for organising such a brilliant event which she has said will now become an annual fundraiser.”

Paula Rastrick, community fundraising manager in the Central region for Brain Tumour Research, said: “For too long brain tumours have been a neglected cancer. We are so grateful to Gemma and her family for their support and we thank Cara for organising Run for Gem and all who got involved to raise such an amazing sum.”

It’s not too late to add your donation inspired by Gemma. To donate to Brain Tumour Research go to www.justgiving.com/fundraising/cara-greenley2

To donate to St Helena Hospice go to www.justgiving.com/fundraising/cara-greenley1