Friend lost to brain tumour is remembered at research centre 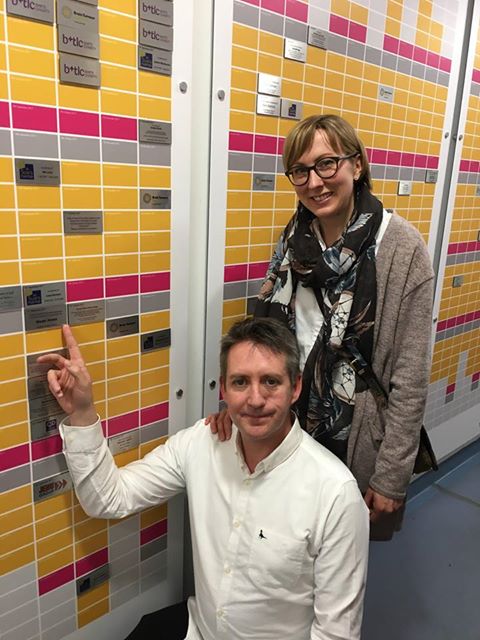 A man who lost his close friend to a brain tumour has raised thousands to help fund scientific research into finding a cure for the disease.

Johnathan Poole, aged 45 from Wokingham, chose to fundraise for the pioneering charity Brain Tumour Research after his friend Ieuan Jones died from a brain tumour in May 2016. Johnathan ran the London Marathon in April 2017, raising £4,300 to go towards research into the disease.

On Wednesday 11th April, Johnathan was invited by the charity to visit the Brain Tumour Research Centre of Excellence at Queen Mary University London to see how all money raised contributes towards research. Joined by his partner Liz, Johnathan also had the opportunity to place a tile on the Wall of Hope at the research centre.

Led by Prof. Silvia Marino, in collaboration with University College London, the team at the centre are studying glioblastoma tumours – one of the most aggressive and deadly types of brain cancer and the tumour that Ieuan died from, aged only 43.

Johnathan, Head of Land Product at TravelUp Group PLC, said: “It’s an honour to visit one of the Brain Tumour Research Centres of Excellence and see where all the research takes place. Running the marathon and raising money for the charity was such a big achievement of mine and I’m so pleased to see how it’s making a difference to researchers.

“The tile symbolises not only the money I’ve raised for research into brain tumours but also commemorates my dear friend who is sorely missed by so many.

“I won’t be running the London Marathon this year, but I’ll be at the Brain Tumour Research cheer point to support all of this year’s runners.”

Ieuan, a trainer for Emirates Airline, was diagnosed in December 2014 and sadly lost his life less than two years later in May 2016, leaving behind his wife Kelly and three-year-old daughter Sienna.

Michael Thelwall, Head of Community Fundraising for Brain Tumour Research, said: “Johnathan has raised an incredible amount for Brain Tumour Research and we’re really pleased he has been to see the research taking place at the Queen Mary University London, and also place a tile on the Wall of Hope. Stories like Ieuan’s remind us all that we cannot allow this desperate situation to continue.”

For further information, please contact:
Farel Williams at Brain Tumour Research on 01908 867239 or 07592 867239 or Farel.Williams@braintumourresearch.org