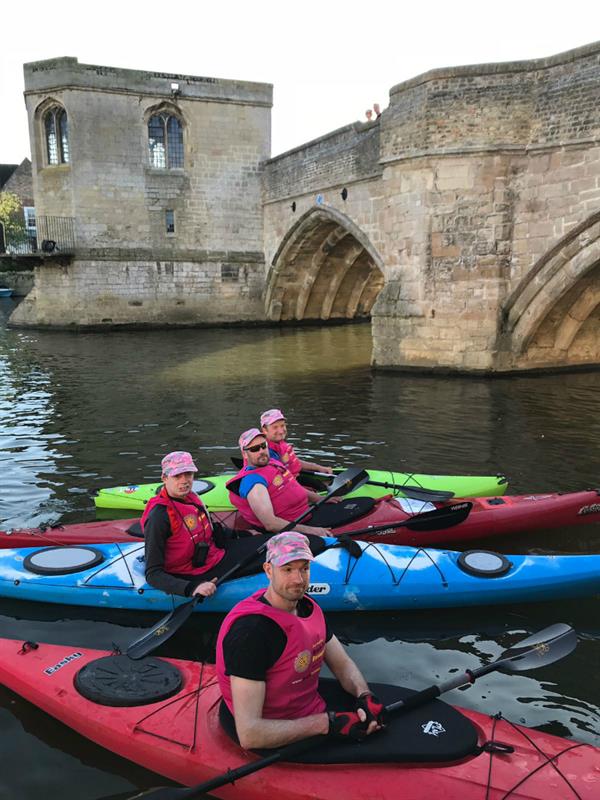 A woman from Harlington, near Dunstable, who passed away last year, aged 62, after cancer spread to her brain was remembered on Saturday as four men, including her son, took on a 50K kayaking challenge, paddling from Kempston to St Ives to raise funds for vital research into brain tumours.

Andra Bishop was a writer and former Head of Drama at Rushmoor School in Bedford. She was a much-loved member of the Harlington village community and especially known for being the writer behind the village’s pantomimes, ever since her first in 1987. Tragically, Andra developed cancer in her colon, liver and lungs, but it was when it spread to her brain that she really suffered as it affected her speech, her memory and eventually stopped her being able to write.

On Saturday 5th May, Andra’s son Carl Bishop, 36, from Flitwick, along with her daughter Natalie’s partner Paul Jeffs, 42, from Dunstable, a Head of Year at Manshead CE Academy in Caddington (where Natalie also teaches), as well as Paul’s brother Andrew, 44, from Dunstable, and Paul’s friend Jez Young, 44, from Luton, all completed the 50K paddle in around 10 hours.

Paul explained: “Starting out from Kempston with a bit of a flow helped. We got to our lunch stop and halfway point at St Neots at 1pm and after refuelling we headed towards Huntingdon. The portage points at the locks (13 altogether) were higher get outs and drop ins than we expected, which meant that lifting the kayaks in and out of the water was a lot harder. Despite this, we still arrived at our finish in St Ives at around 6.15pm, ready for a lovely fish and chip supper, whilst watching the sun go down over the Great River Ouse.

“Nobody fell in and all paddlers finished in good shape, but glad to have made it.”

The four men were raising funds for Fluffy Cloud and Co, a fundraising group under the umbrella of pioneering national charity, Brain Tumour Research, which has its headquarters in Milton Keynes.

Fluffy Cloud and Co was set up by Jane Barltrop of Harlington and her daughters Alice Sulaj of Milton Keynes and Emma Barltrop who lives in Tring, after they lost husband and father Pete in August 2016, just 17 months after he was diagnosed with an aggressive and incurable glioblastoma multiforme (GBM) brain tumour. Andra and her husband Andrew (known as ‘the two Andys’) were good friends of Jane and Pete, with Jane also being involved in putting on Harlington’s popular pantomimes.

Whilst Jez and Andrew are both keen kayakers who, together with Paul, took on the Three Lakes Challenge two years ago (paddling the length of the three biggest lakes in England, Scotland and Wales), Carl had never done anything like this before.

Carl said: “It was great to take on this challenge in memory of Mum for such a worthy cause, but it was nothing compared with the challenge she was forced to face when she got cancer and particularly when it spread to her brain. Brain cancer is such a cruel disease.”

Paul added: “Less than 20% of brain tumour patients survive beyond five years compared with an average of 50% across all cancers. It was therefore pretty shocking to discover that just 1% of the national spend on cancer research has been allocated to this devastating disease. We hope that the £500 we have raised to date will go some way to making a difference.”

Michael Thelwall, Head of Community Fundraising at Brain Tumour Research, said: ““Brain tumours kill more children and adults under the age of 40 than any other cancer – and more men under 45 than prostate cancer.

“For too long, brain tumours have been a neglected cancer. Experiences like Andra’s and Pete’s remind us all that we cannot allow this desperate situation to continue. We are extremely grateful to Carl, Paul, Andrew and Jez and all involved with Fluffy Cloud and Co for helping to raise funds for our charity.”