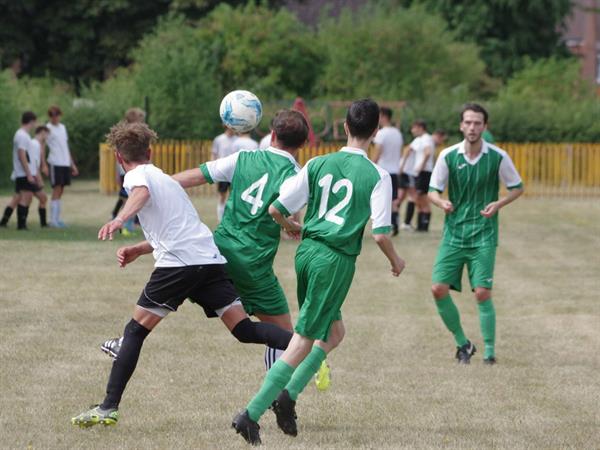 A football tournament and fete has taken place in memory of an Abingdon man lost to a brain tumour, to help scientists searching for a cure for the disease.

Several teams took part in the third annual Alan May Memorial Football Tournament, raising over £600 for the Brain Tumour Research charity. The event marked the second anniversary of the death of former Saxton Rovers Football Club manager Alan, who first organised the competition while undergoing treatment for a brain tumour.

The football fundraiser took place in at Saxton Rovers’ ground on Saturday 4th August 2018. Alan’s two sons, Shane and Dayle May, hosted the tournament and his former side, Mabby’s Mates, finished as champions after a nail-biting penalty shootout. His wife, Sandra May, organised the fete. After the celebrations were complete, players and supporters were invited to raise money for the charity, which included a raffle and cake stall.

Sandra, a 49-year-old Abingdon resident, who was married to Alan for 30 years, said: “The football tournament and fete has been a fantastic way to bring the local community together and has helped to give me purpose through my bereavement. The money we raised from Saturday’s tournament is included in the £5,400 we’ve raised for Brain Tumour Research over the years. Alan was well-known by his neighbours and as a family we have found comfort in hosting this event, which I hope to help organise for many years to come, to continue Alan’s legacy.”

Alan, a builder, was diagnosed with a glioblastoma multiforme (GBM) – a highly aggressive type of brain tumour – after suffering from severe headaches. Despite having radiotherapy and chemotherapy, Alan passed away in August 2016, just 10 months after his diagnosis, aged 51. He left behind his wife, two sons Dayle and Shane, and three young granddaughters Ellie, six, Lola, five and Poppy, three.

Michael Thelwall, Head of Community Fundraising for Brain Tumour Research, said: “We are extremely grateful to the May family for organising another successful football tournament and fete in memory of Alan. We are also grateful to the Abingdon residents for participating in the fun and hope to inspire others to fundraise for this worthy cause.”

“For too long, brain tumours have been a neglected cancer. Alan’s story reminds us all that we cannot allow this desperate situation to continue. Brain tumours are indiscriminate; they can affect anyone, at any age, at any time. What’s more, they kill more children and adults under the age of 40 than any other cancer, yet just 1% of the national spend on cancer research has been allocated to this fight devastating disease.”