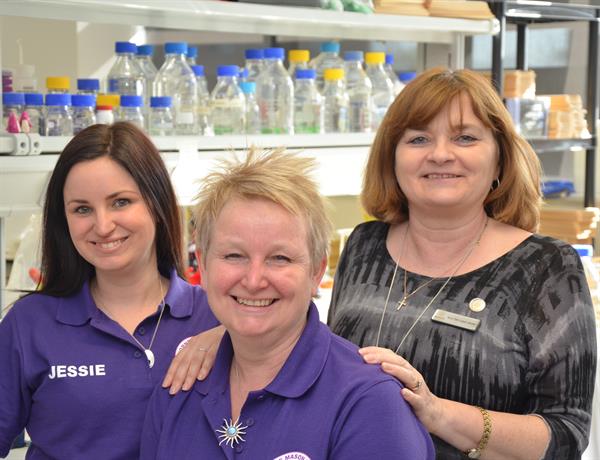 A Welsh charity helping to fund research into brain tumours at Cardiff University while supporting cancer patients is holding a ball to celebrate its 10th anniversary.

The Thorne Mason Trust, based in Pembrokeshire and a member charity of the Brain Tumour Research charity, was set up by Mike Mason and his wife Debi of Haverfordwest in 2008 after Mike was diagnosed, aged 53 with a brain tumour. The Thorne Mason Trust was registered as a charity in 2009.

In August 2007, having experienced a sensation of numbness in his foot while playing football which spread to his leg and his left side, Mike collapsed. He was taken to hospital where doctors discovered he had a highly aggressive brain tumour known as a glioblastoma multiforme (GBM).

Mike underwent radiotherapy and chemotherapy and refused to accept he was going to die. He had a good year health-wise until October 2008 when he started to drag his leg again. Mike was then given further chemotherapy, but his mobility continued to worsen and he started having fits. He eventually lost the ability to speak and then to do anything at all, before passing away at home aged 55 in November 2009.

Debi said, after losing her beloved husband: “We were together for 33 years, but something happened on one day and nothing will ever be the same again. We never planned for one of us dying so relatively young – we always planned for what we would do together when we were old.”

Brain tumours kill more children and adults under the age of 40 than any other cancer, yet historically, just 1% of the national spend on cancer research has been allocated to this devastating disease.

The Thorne Mason Trust, which has raised more than £75,000 over the years, is celebrating its landmark anniversary with a glittering black-tie event on 23 March at the Beggars Reach Hotel in Burton, Milford Haven. Tickets are £35 and include a three-course dinner with coffee and mints, a DJ and live music courtesy of well-known local group Renthouse Groove.

Mike’s daughter Jesse, 32, an Art teacher at Ysgol Bro Gwaun in Fishguard, said: “We are very grateful to Vaughans in Haverfordwest, with electrical showrooms across Wales, and Essex Smart & Windscreens for sponsoring the ball, as well as to the local community who have generously donated to our silent auction. There will be lots valued from £20 up to more than £500, including a golf day at Celtic Manor, as well as hotel and spa stays.

“During the night we are also proud to be presenting a cheque for a further £10,000, having previously donated £20,000, to sponsor PhD research student Catia Neto and support vital research into GBM brain tumours at Cardiff University. Researchers at Cardiff collaborated with scientists at Brain Tumour Research’s Centre of Excellence within the University of Portsmouth for this project. We are very happy that Sue Farrington Smith, chief executive of Brain Tumour Research, is coming to our ball and has agreed to accept the cheque on behalf of Cardiff University.”

Sue said: “I am delighted to be attending the ball to celebrate the Thorne Mason Trust’s 10th anniversary, which falls in the same year as Brain Tumour Research celebrates its own 10th anniversary!

“Brain tumours are indiscriminate; they can affect anyone at any age. Mike’s story reminds us that less than 20% of those diagnosed with brain tumours survive beyond five years compared with an average of 50% across all cancers. We cannot allow this situation to continue.

“The research collaboration between Cardiff University and our research centre within the University of Portsmouth, couldn’t have been possible without the support of the Thorne Mason Trust and has led to a greater understanding of GBMs. It is only through innovative research projects like this that we will find a cure for brain tumours.”

To obtain tickets priced at £35 per person, go to www.tickettailor.com/events/thornemasontrust

Liz Fussey at Brain Tumour Research on 07811 068357 or  Liz@braintumourresearch.org