#RunForLochlan – My epic challenge inspired by my son 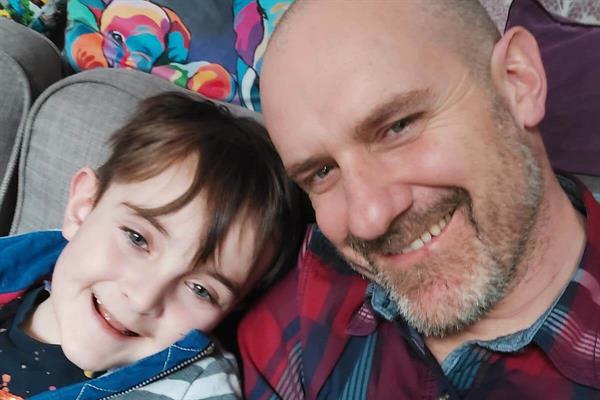 On 24th June, Ross ran 55 miles from his home in Marske-by-the-Sea to the Great North Children’s Hospital in Newcastle. His incredible journey was inspired by his son Lochlan who died from a high-grade glioma on 2nd May 2021, aged just eight.

We did it! The mission that I’d planned and dedicated some two years of my life to was finally achieved. I’d run 55 miles from our home to Newcastle for our son, Lochlan. But how I wish my inspiration came from somewhere else. 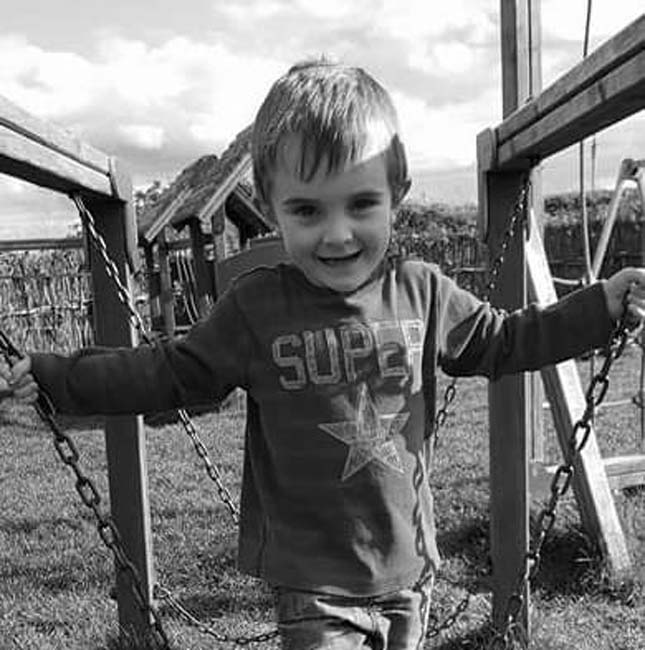 When you are given the worst possible news imaginable, like we were in July 2019, your brain, your body, your life goes into shut down. Everything stops. To hear the words “your child has an incurable brain tumour” and to be told they don’t know how long he has left, those are words that my wife Sonia and I would rather forget and hope. But, sadly, we will never forget them. Our lives changed in that split second.

What became evident over the coming months was how little is known about paediatric brain tumours. We were shocked to discover that brain tumours kill more children and adults under the age of 40 than any other cancer, yet historically just 1% of the national spend on cancer research has been allocated to this devastating disease. On our journey through the dark world of brain tumours, treatment, care, and trying to provide our son and family, including Lochlan’s sister Faith, with some sort of normal life – for however long he had left with us – these facts bugged me. Why was so little being done? Why is so little available to families like ours? Why should families like ours have to go through this? What had we done wrong? 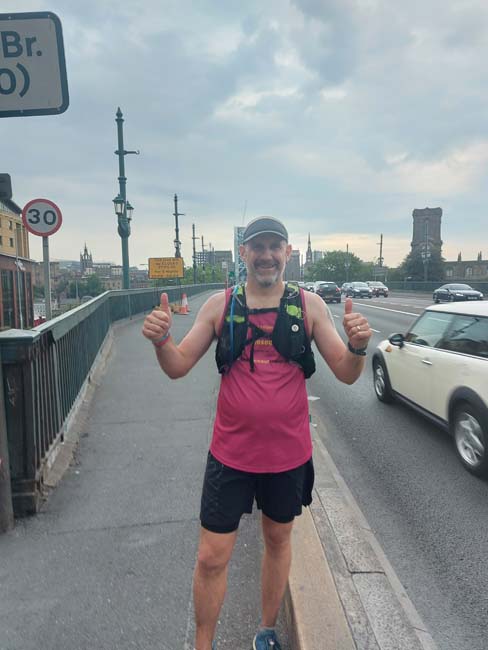 Ross during the challenge

So, I decided to run. To run from our family home to the hospital – a journey we had taken countless time as a family with Lochlan over a period of 22 months.

I’d do it to help two very important charities: Brain Tumour Research and Children’s Cancer North. Two charities on the frontline in providing cutting-edge research, and invaluable care and support to families through the darkest of days.

Weeks and months passed, and Lochlan’s treatment continued. But in January 2021 we were told he had relapsed, and the tumour had spread further into his brain tissue. There was nothing more his medical team could do, beyond controlling his symptoms and keeping him comfortable and happy as best they could. On 2nd May 2021, Lochlan passed away comfortably and quietly at home with us together as a family.

As we came to terms with our loss and how much our lives had changed and would never be the same again, I took solace in my running. It brought me a strange sense of quiet and comfort, away from all the heartache and grief that consumes you. It helped me and continues to help me stay focused, it gives me time to think and grieve in a way that feels OK, even though your life is not OK anymore. 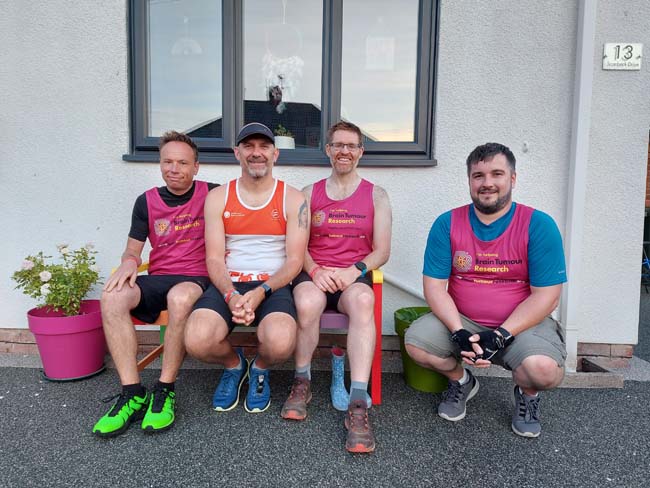 The team before the challenge

I decided I’d do the challenge on Friday 24th June for two reasons. One: it was just after the summer solstice so I’d have maximum daylight for what I knew could be 12-16 hours of running. Two: Friday was always clinic day for Lochlan; it was the day we’d have our little outing and adventures up to Newcastle. It felt only natural to do it on a Friday. 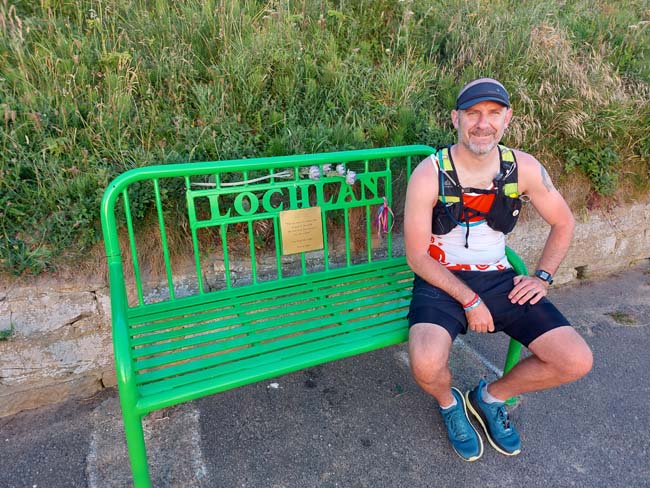 The route was finalised and worked out at just over 55 miles. It would mostly follow National Cycle Route 1 and take us through most of Teesside, a little of County Durham, through Gateshead and into Newcastle.

Quite coincidentally, but most importantly, the route was going to take us within 200m of where Lochlan had been laid to rest at a Woodland Burial site near Trimdon. This made it feel all the more special and significant. 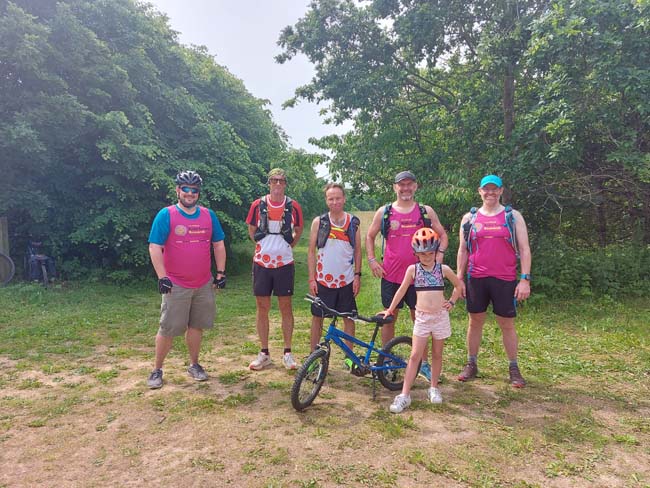 The team, including Faith who joined them for five miles on her bike

I happened to mention the challenge to Lochlan’s Doctor, Paediatric Oncology Consultant Dr Rebecca Hill. Immediately her eyes lit up, as I knew she was a keen runner herself. Her response, like many, was: “Oh my that’s a long way!” But she very quickly volunteered her then fiancé Andrew to run it with me, as he was a keen marathon runner and would love to do this sort of challenge. So, there was my first teammate!

As I trained for my challenge and started spreading the word, I roped in some more friends for our little run, Chris Crooks, Michael Beever and Andrew Maguire.

When the day arrived and we set off, others joined us too. It was a complete surprise and very humbling to know I had such great support and friends around on this journey. Joanne Tickle completed a few miles with the team, and Mary Dryden joined us on her bike for a few miles. Calvin Nicholson set out to do five miles or so, but was quickly convinced to run all the way (with very little resistance I might add).

Sonia and my daughter Faith, eight, cycled five miles with us too. This was Faith’s idea and her way of getting involved and helping dad to achieve his goal. She is such a brave superstar!

My best friend Andrew Maguire also joined us. Very early on in the planning he had promised to come down from Edinburgh and run the last 10 miles with me. But, with the buzz of the day and seeing how much fun we were all having, he decided to join us early, with some 25 miles still to go. 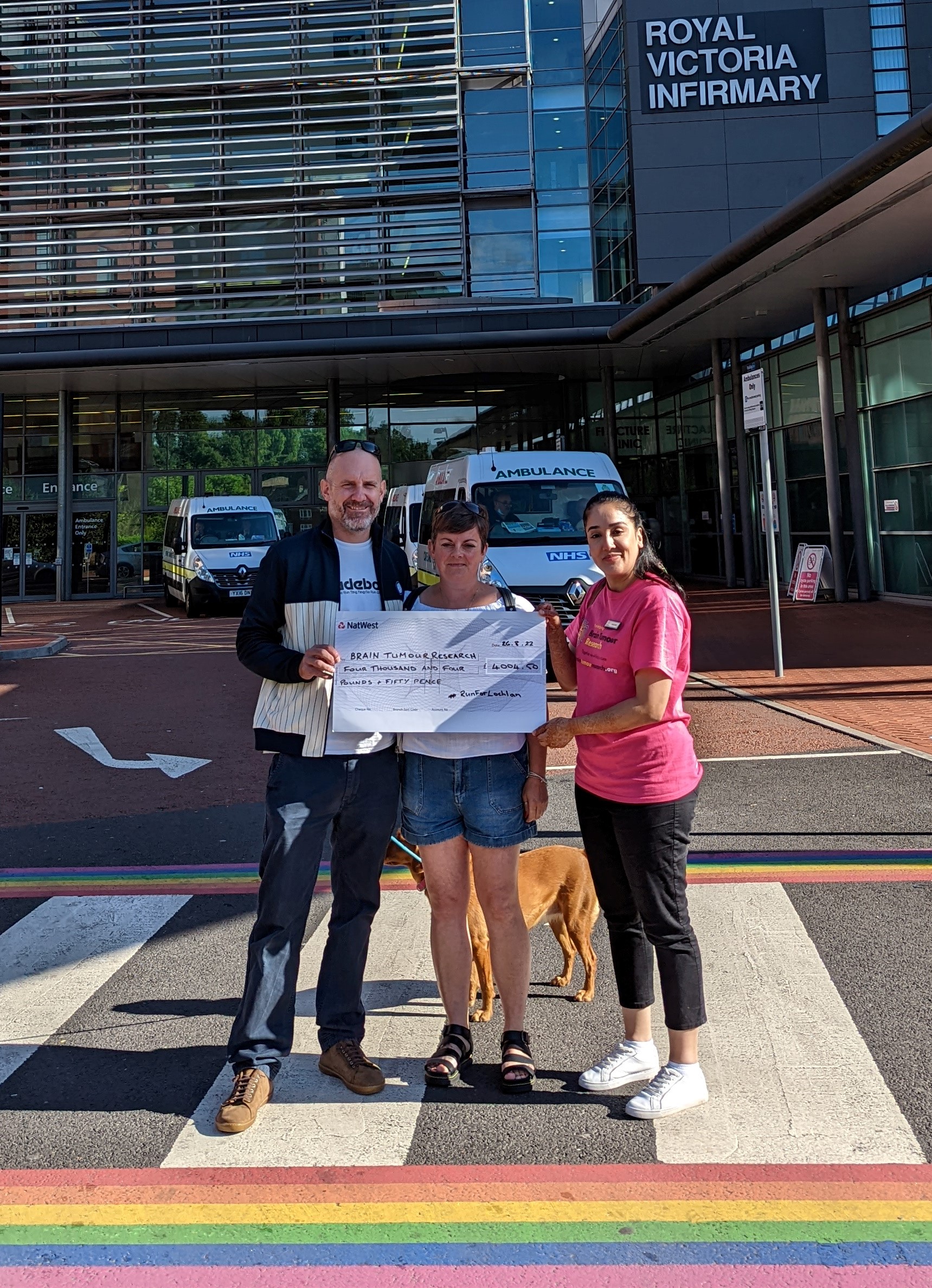 The challenge was all about raising awareness of brain tumours and raising as much money as possible to help fund research and to support other families affected by cancer.

As the end of the challenge was closing in – with our finish line just 10 miles away – I got a little emotional and really began to take in what I was doing, why, and what it meant to me, to my family and to many others like us who had their lives ripped apart and turned upside down. If we can better treat and cure some cancers, why not brain tumours?

We crossed the Tyne Bridge just after 5pm – 12 hours and 52 miles after leaving Marske-by-the-Sea. With only three miles to go, we dug deep and mustered all the energy we had left to push on to the end.

We were flying now, running as hard as we could, dodging our way through Friday afternoon rush hour in the Centre of Newcastle. Half a mile to go!

We turned a few more corners and there it was. The Great North Children’s Hospital.

As we drew closer, I could see a crowd had gathered and balloons were blowing about in the breeze. We turned the corner into the car park and hospital entrance. And there were all our family and friends who had gathered to see us finish.

We had made it! We had achieved what I set out to do almost two years ago. We’d raised much-needed awareness and funds for research into brain tumours. We had made a difference.

I am sure Lochlan would be proud of what I have achieved. He was with me every step of the way. I am proud of him and I am proud to be his dad.