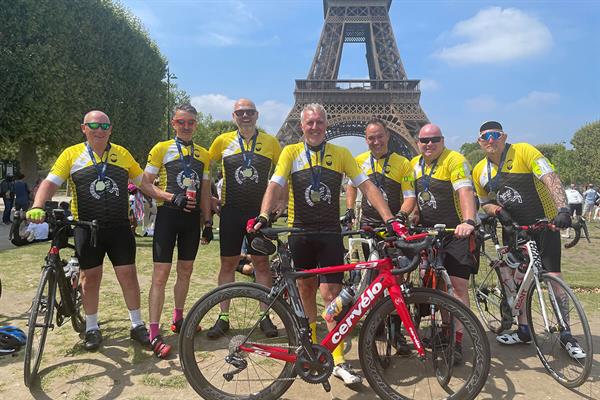 A dad has completed an epic cycling challenge to support Brain Tumour Research after losing his son to the disease.

David Bradford (pictured centre) and six friends cycled 282 miles from London to Paris inspired by David’s son Adam, who died from a grade 4 anaplastic oligodendroglioma when he was just 27 on 23rd December 2019.

Following Adam’s diagnosis in 2016, the family became keen supporters of Brain Tumour Research, raising thousands to help find a cure. In October 2017, Adam and David raised more than £7,000 by cycling 300 miles from America’s Grand Canyon to Las Vegas in scorching temperatures. The following year, the family attended a tour of our Centre of Excellence at Imperial College London where they placed two tiles on the Wall of Hope.

Speaking about the London to Paris cycle challenge, Adam’s step-mum Vickie said: “It was so emotional and just tremendous that all these guys got together to do this.

“It’s unbelievably important to raise money for Brain Tumour Research because we don’t want other families to go through what we did. So far, we’ve raised enough money to fund seven days of research into brain tumours.”

Now, Team Adam is holding a raffle with some impressive prizes up for grabs, including a Porsche experience day at Silverstone racetrack or the use of a Porsche Boxster or Cayman for a weekend. Entrants have until midnight on 13th November to buy tickets for the raffle, which will be drawn on Adam’s 30th birthday on 15th November.

To take part in the online raffle, visit: justgiving.com/fundraising/david-bradford10 or email: adamsdash2021@yahoo.com