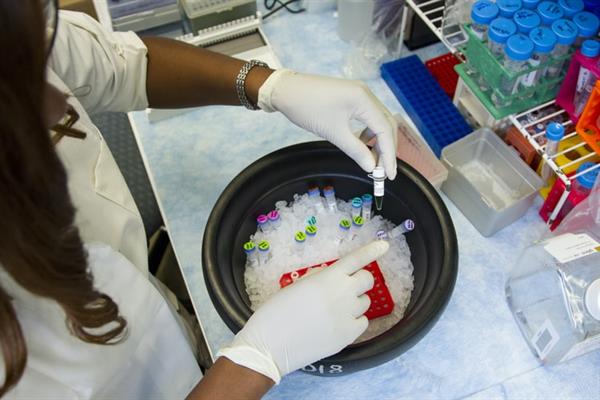 Scientists have discovered how a common molecular tool for DNA labelling also has anticancer properties worthy of further investigation, especially for brain cancers. They made the surprising discovery that a molecule called EdU, commonly used in laboratory experiments to label DNA, is in fact recognised by human cells as DNA damage, triggering a runaway process of DNA repair that is eventually fatal to affected cells, including cancer cells.

The discovery, published in the Proceedings of the National Academy of Sciences, points to the possibility of using EdU as the basis for a cancer treatment, given its toxicity and its selectivity for cells that divide fast.

“The unexpected properties of EdU suggest it would be worthwhile to conduct further studies of its potential, particularly against brain cancers,” said study senior author “We want to stress that this is a basic but important scientific discovery. The scientific community has much work ahead to figure out if EdU could actually become a weapon against cancer.”

Published in the journal Neuro-Oncology, a study conducted by researchers in Brazil, Australia, Austria and the United States has made significant discoveries about the mechanisms of ependymoma. Ependymoma begins in the ependymal cells lining the hollow cavities within the brain that are filled with cerebrospinal fluid. By using an array of advanced techniques, the researchers discovered that the so-called Hedgehog signalling pathway (Hh) is highly activated in this type of tumour. They treated tumours in the laboratory with Sonidegib, a Hh inhibitor currently undergoing clinical trials as a drug for other central nervous system tumours.  The hope is that this work will pave the way for more specific ependymoma therapies.

Since 2010, the American Brain Tumor Association (ABTA) has awarded the Joel A. Gingras Jr. Award, their highest honour, to recognise an individual, organisation or group that has made significant contributions to the Association’s mission through philanthropy, advocacy, discovery, or patient care.  The ABTA leadership has announced Dr Mark Gilbert as the 2022 Joel A. Gingras, Jr. Award recipient. At the National Cancer Institute (NCI), Dr Mark Gilbert leads a robust team of researchers and clinicians performing cutting-edge research in the field of neuro-oncology. In his pursuit of advancing brain tumour treatments, Dr Gilbert also aspires to make clinical and translational research more accessible, so that physicians around the world can make a collective impact on neuro-oncology.

Here’s a clip of Dr Gilbert talking to Brain Tumour Research about Ependymoma Awareness Day back in 2018.

Pharma company Blaze Bioscience, are working on a fluorescent molecule to help surgeons better remove tumours and have reported data from a phase 1 trial testing its “tumour paint” in adults with gliomas. The tumour paint is based on a miniprotein found in the deathstalker scorpion that binds to cancer cells, but not to healthy tissue. Blaze has attached a fluorescent dye that acts like little molecular flashlights to a synthesised version of this protein to create the tumour paint, which zeroes in on tumours and emits near-infrared light. The hope is that lighting up the tumours will help surgeons remove more of a tumour without sacrificing normal tissue.

Earlier this year Dr Ruman Rahman, Associate Professor of Molecular Neuro-Oncology at the University of Nottingham contributed as a witness to the Oral Evidence Session for the All-Party Parliamentary Group on Brain Tumours (APPGBT) inquiry ‘Pathway to a Cure’. In this blog, he shares his observations on funding barriers to brain tumour research and sets out the importance of overcoming them.

NHS England are developing an NHS Genomics Strategy which will set the strategic direction and priorities for genomics in the NHS in England over the next 3-5 years.

Throughout Summer 2022 they have engaged with over 200 key stakeholders, including patients and charities, healthcare professionals, and industry, to inform the development of the strategy. This engagement has generated a set of themes and insights that stakeholders feel that the Strategy should include.

NHS England has used these stakeholder insights to put together a survey, so that we can gather further input and prioritisation on what the Strategy should include. This survey is designed to capture views from stakeholders and does not represent the views of NHS England.

The survey should take ~20 minutes to complete, and can be accessed on the link below. You do not have to answer all sections of the survey and can choose to respond to the areas that are of most interest or relevance to you. The survey will close at 11.59pm on 12th September 2022.

Finally, this week the deadline for the submission of preliminary applications for the new Brain Tumour Research Centres of Excellence funding call has passed and we are thrilled at the quantity and quality that we have received. The next steps can be found here.

We will be at the Cancer Research UK Brain Tumour Conference 2022 next week, we hope to see many of you there, so there won’t be a research news update next week but they will return on Friday 16th September.