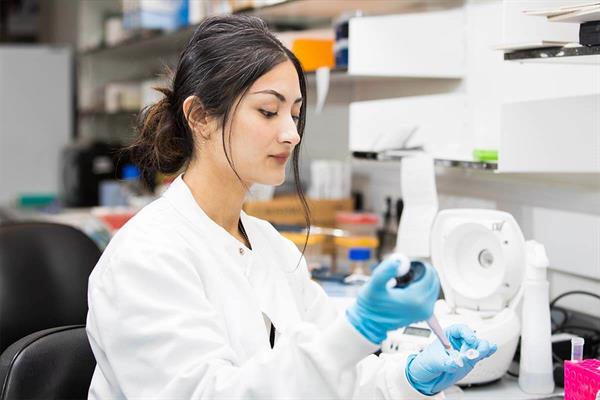 Today we are announcing plans to launch an additional Centre of Excellence where scientists will be focused on helping to find a cure for brain tumours.

We are inviting applications from UK-based researchers and their teams to play a pivotal role in helping us achieve our vision of finding a cure for all types of brain tumour. We will be investing an initial £2.5 million over five years and thank our community of supporters for their tireless efforts in fundraising which have made the announcement possible.

The new Centre will grow capacity in the UK, bringing together or continuing to build a critical mass of staff, infrastructure and collaborations, while helping to transform research into the disease which kills more children and adults under the age of 40 than any other cancer.

Sue Farrington Smith MBE, our Chief Executive said: “We are extremely proud to be in a position to launch this call for applications for a new Centre. Thanks to our supporters, including many brain tumour patients and their families and those whose lives have been changed forever by this devastating disease, the year to June 2021 saw us deliver our best financial year yet.

“We emerged from a tumultuous year as a result of the COVID-19 lockdown with an income of £5.3 million, up 76% in the previous year. With the ongoing support of the brain tumour community, we are now working towards our ambitious aim of funding seven dedicated Centres of Excellence which will help us in our vision to find a cure, improve treatment options and bring much-needed hope to so many.”

The successful Centre will be announced during March which is Brain Tumour Awareness Month. It will join existing Centres at Imperial College, London, the University of Plymouth and Queen Mary University of London to become the latest Brain Tumour Research Centre of Excellence.

Some well-known friends of the charity have been reacting to this news:

Dame Sheila Hancock said – "It is a source of great pride to me that a charity that I have watched grow for over a decade is able to announce this research funding landmark. I send my congratulations to all involved and look forward to hearing all about the new research Centre in due course.”

Leading sports broadcaster Jacqui Oatley MBE’s view is – “I’ve been very happy to support Brain Tumour Research with their fundraising campaigns as I have known people who have been affected by this awful disease. To now find out that these fundraising efforts have resulted in a new Brain Tumour Research Centre of Excellence is so rewarding and I’d like to thank everyone who has donated and shared the vision of a cure for brain tumours – a new Centre is another step on that pathway to a cure.”

Television, radio and stage performer Debbie McGee whose husband TV magician Paul Daniels died from a brain tumour in 2016 told us - “I’ve been involved with Brain Tumour Research since my husband Paul died from a brain tumour. It is such a complex disease and the unique puzzle it poses will only be unlocked by dedicated sustainable research, research of the type that will be conducted at this new Centre. These are exciting times for those of us desperate to see progress towards a cure for brain tumours.

According to renowned property expert, businesswoman, TV presenter and writer Sarah Beeny; - “Brain Tumour Research is a cause that is personal to me but more than that the charity has become important to me as I've watched them grow and their impact increase. I am thrilled that we are at this new milestone of being able to introduce a new research Centre collaboration and strengthen UK based brain tumour research. Relationships with charities can be short lived but as I approach a decade of supporting Brain Tumour Research I do so with a sense of pride at what our charity is doing and optimism for what we can achieve together going forward.”

At last week’s conference Dr Chao Li was announced as the winner of the British Neuro-Oncology Society (BNOS) Young Investigator Award, an award which Brain Tumour Research is proud to co-sponsor.

Neurosurgeon Dr Li (in the attached picture he is in the centre, with BNOS President, Consultant Neurosurgeon Mr Paul Grundy and Wendy Fulcher, chairman of trustees at Brain Tumour Research) is a fellow in clinical neurosciences at the University of Cambridge. His research is focused on characterising brain tumours using advanced neuroimaging and artificial intelligence (AI), particularly focused on how AI can bridge the gap between model development and real-world clinical application.

Dr Li said: “I am so honoured to have my work recognised by the panel and the research community. My passion is in image-based artificial intelligence and data science research. Many hours have gone into learning new techniques and developing research expertise and it means so much that the direction I am so passionate about is also recognised by our colleagues. I am thrilled and encouraged to further develop my research to benefit brain tumour patients.”

The announcement was made at the Conference by Dr Nicky Huskens, CEO of the TJBCM.

NTAB is a brand new accelerator programme to review and provide guidance on the translation and developments of novel drug treatments. It aims to bridge the gap between the promising research findings presented at conferences, published in journals and hailed as the basis for possible future treatments and cures, and the number of these findings which progress into successful clinical trials.

The programme provides infrastructure to ensure the most promising therapies reach patients as quickly as possible through a confidential review and go-no-go milestones. Applicants will have the opportunity to use the committee reports to support subsequent funding applications or discussions

The aim of each review is to identify potential pitfalls in clinical trial design and give independent, transparent advice in order to help the applicant position the candidate compound along a realistic and well-informed pathway to clinical trial and eventual registration.

It is hoped the programme will see more agents successfully enter into human trials, more research focused on drug discovery encouraged and stimulated, improved relationships with industry and academia, and de-risking of trials.

A researcher at our Centre of Excellence at Imperial College, London has been named by the Women’s Engineering Society as one of the Top 50 Women in Engineering.

Dr Sophie Morse was given the honour for her work on improving the way drugs are delivered to the brain using a non-invasive and targeted ultrasound technology combined with microbubbles. Funded by Brain Tumour Research as part of our Imperial team, she will apply this ultrasound technique to the field of brain sciences, specifically to brain tumours.

Announced on International Women in Engineering Day, this is the latest of a number of awards that Dr Morse has received for her work. She has previously been awarded the Gold Medal in Engineering at the STEM for Britain event in the UK Parliament, Young Investigator Awards from the British and European Ultrasound Societies, and the William James Award from the Institute of Engineering and Technology.

Dr Morse said she was honoured to receive the award: “It means a lot to me that all the passion and time I’ve put into developing this technology to deliver drugs to the brain, while advocating for women so they feel comfortable in engineering, is being recognised. I am so thankful to everyone who has supported, mentored and encouraged me along the way.”

Focused ultrasound is a really exciting area of brain tumour research, offering a targeted, less-invasive way to cross the blood brain barrier for more effective drug delivery to the brain. This research brings hope for better treatments and outcomes which are so desperately needed for brain tumour patients and their loved ones.

A drug carrier able to reach the brain, bind to a glioblastoma tumour and release a chemotherapeutic agent has been tested for the first time by Brazilian researchers. According to an article published in the International Journal of Pharmaceutics, the potential treatment was shown to be effective in isolated cells and animal models thanks to a combination of nanotechnology, chemotherapy and a monoclonal antibody. Researchers combined docetaxel, a powerful chemotherapy drug, with a nanostructured lipid carrier designed to cross the blood-brain barrier and coupled the carrier to bevacizumab, a monoclonal antibody developed against vascular endothelial growth factor (VEGF).

A simple language test could help diagnose brain tumours earlier. A study suggests that the “Noah’s Ark” task, which asks participants to name as many animals as they can in 60 seconds, could help GPs identify patients with common symptoms such as headaches who are most likely to have a brain tumour.

A “revolutionary” treatment could help surgeons to remove brain cancers like glioblastoma more effectively, and boost the body’s response to cancer cells that remain after surgery. The treatment, called light-activated therapy, is a new form of photoimmunotherapy that can wipe out microscopic cancer cells and was developed by a joint team of engineers, physicists, neurosurgeons, biologists and immunologists from the UK, Poland and Sweden. They believe that this new form of treatment has the potential to become the world’s fifth major cancer treatment after surgery, chemotherapy, radiotherapy and immunotherapy.

The United States Food and Drug Administration (FDA) has awarded Orphan Drug Designation (ODD) to Kazia's paxalisib for the treatment of atypical rhabdoid / teratoid tumors (AT/RT), Paxalisib has previously been granted ODD in malignant glioma, a category of brain cancer that includes both glioblastoma which is the lead indication for the drug, and diffuse intrinsic pontine glioma (DIPG),

The Medicines and Healthcare products Regulatory Agency (MHRA) has announced plans to reform medical devices regulation to improve patient health and encourage innovation. To signify products have met these world-leading standards, they will carry the UKCA marking, a new stamp of certification, replacing the CE mark. The new measures include: “Making the UK a focus for innovation, and the best place to develop and introduce innovative medical devices – ensuring the new regulatory framework encourages responsible innovation so that patients in the UK are better able to access the most advanced medical devices to meet their needs.” At Brain Tumour Research we believe the focus on innovation is an encouraging one. The use of devices to improve the effectiveness of drug delivery to brain tumour patients and to reduce the systemic toxicity they endure is one we believe to be vital as we push for improved patient outcomes.  Any legislation designed in part to lessen harsh treatments is to be applauded and the Government describes this as ‘an ambitious, transformational programme of reform’ and that is exactly what is needed.

A couple of job opportunities to finish this week.

Cardiff University are currently offering a PhD studentship in neuro-oncology with a closing date of July 4. The project title is "Functional heterogeneity of FGF receptors in glioblastoma cancer stem cells” ( https://www.findaphd.com/phds/project/functional-heterogeneity-of-fgf-receptors-in-glioblastoma-cancer-stem-cells/?p145443). Any interested applicants can contact Florian Siebzehnrubl for further information. fas@cardiff.ac.uk

A position is available for a postdoctoral research assistant to join the laboratory of Silvia Marino at the Blizard Institute, Queen Mary University of London. The successful applicant will lead an exciting project focusing on exploiting deregulated epigenetic mechanisms to inform the design of precision medicine approaches in malignant brain tumours of childhood. It will directly build on recent work from the Marino lab on medulloblastoma, which has shown that specific epigenetic signatures can predict response to new combination therapies.