Thinking of you on Father’s Day 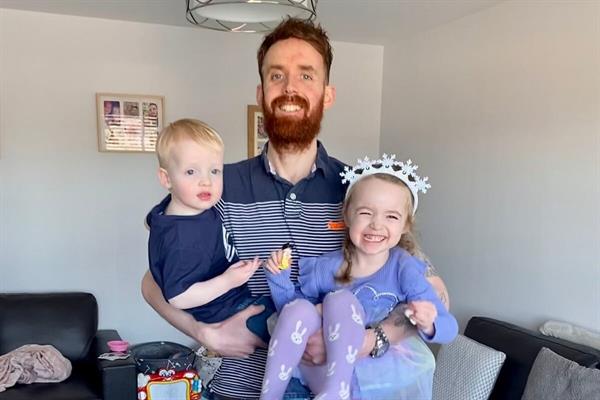 This Father’s Day, our thoughts are with all the families who have been affected by brain tumours.

Whether you are spending today with someone living with a brain tumour, are a father facing a devastating diagnosis, or are remembering a loved one, we are keeping you in our thoughts.

Father-of-two Stewart Bryson was first diagnosed with a brain tumour in 2014. He had an awake craniotomy during which surgeons removed as much of the tumour as they could, but they were unable to get it all out.

In 2016 a scan showed the tumour had grown so Stewart underwent a second operation. He was told that his tumour had progressed and was now a glioblastoma multiforme (GBM).

He said: “I'm grateful my body has responded so well to the chemotherapy and radiotherapy treatment. Having a positive attitude and temperament has allowed me to just get on with daily life without dwelling on my condition.

“After two years free from surgery, the arrival of our daughter Isla was such a joy, followed 20 months later the birth of our son Finley. The great joy was short lived as a few weeks later a scan showed a tumour had appeared in a different area.”

Stewart, who now has MRI scans every six months, added: “I’m only 34, but at least I’ve had a life, unlike some young children who have what I have.

“Of course, I want to see my children go to primary school and university, and watch them get married, but I try not to think about it too much. It is what it is.”

You can help us get closer to a cure for all types of brain tumours by donating what you can here.