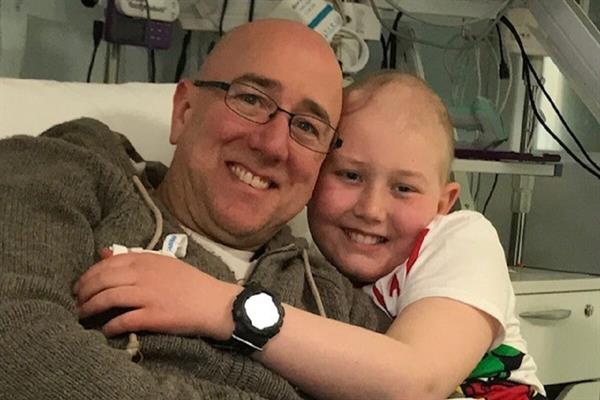 We are pleased that the lab tours of our research centres have recommenced post pandemic as they give our supporters and fundraisers a real chance to see where the money they have worked so hard to raise and donate is actually working on the route to improved options for brain tumour patients. These tours are also an opportunity for researchers to hear brain tumour stories and we know from their feedback that this provides huge motivation for them. This relationship between funder and researcher is so poignantly illustrated by the story of Ollie Gardiner who should have celebrated his 18th birthday at the end of May.

Ollie was diagnosed with a medulloblastoma in May 2015, aged 10. Despite treatment, including emergency craniotomies, chemotherapy and radiotherapy, the cancer returned and the family was told that there were no further options available on the NHS. His parents Jane and Peter, along with friends, launched an appeal which raised almost £500,000 to fund pioneering immunotherapy treatment for Ollie in Germany, but nothing could save him. Ollie passed away in November 2017, aged just 13. Three years ago, the family generously donated £187,000 of the residue of their crowdfunding to Brain Tumour Research. This sum is funding post-doctoral researcher Sara Badodi at our Centre of Excellence at Queen Mary University of London.

Sara said: “Very rarely does a day go by when Ollie isn’t at some point in my thoughts as I work in our lab. I would have liked to have shown him the work we are doing but now we do it in his memory and I am so thankful to his family for the funding they gave us and the opportunity to learn more about his tumour type that this funding presents. It is such a poignant time for Ollie’s family and while they are remembering this lovely boy and grieving the man he should have become, we are doing everything we can to make a future diagnosis of a medulloblastoma, one that brings with it the hope of a full recovery.”

We have been also working with Laura Mahon and her story has achieved widescale national coverage. She gave birth two months after being diagnosed with an inoperable brain tumour and although her future is uncertain she wants to raise awareness of the need for the research that is "desperately needed".

Research brings hope and our patient community, and their families, have a very keen interest in the research landscape and keep a watchful eye on what is being done to progress the pathway to a cure.

Researchers have discovered that infiltrating gliomas are shaped by their genetic evolution and microenvironment. The researchers looked at how gliomas interact with the brain, change over time, develop treatment resistance and become more invasive. They identified three distinct phenotypes or observable traits at glioma recurrence - neuronal, mesenchymal and proliferative. Each of them converge with cellular, genetic and histological features that reveal themselves at recurrence. These findings, published in the journal Cell could lead to more targeted treatments.

Day One Biopharmaceuticals has unveiled positive initial data for its brain tumour drug tovorafenib, causing its share price to double. The positive news for the tovorafenib therapy comes from a small dataset—22 patients in the ongoing phase 2 Firefly-1 clinical trial—the overall response rate of 64% was enough to send the biotech’s shares skyrocketing 109% to $13.82. The trial studied tovorafenib as a monotherapy for relapsed/progressive paediatric low-grade glioma (pLGG). Day One plans to expand tovorafenib to be a front-line therapy for patients newly diagnosed with pLGG harbouring a BRAF alteration and is also evaluating tovorafenib alone, or as a combination therapy for adolescent and adult patients with recurrent or progressive solid tumours with MAPK pathway aberrations in its phase 2 Firelight-1 trial.

Researchers at the Children’s National Hospital (CNH) in Washington, DC, have begun a clinical trial to address diffuse intrinsic pontine gliomas (DIPG). This clinical trial will investigate the safety and efficacy of using sonodynamic therapy (SDT) to target and destroy brain tumour tissue. SDT involves using focused ultrasound to activate a chemical substance that then causes cell death only within the tumour. A similar study for adult patients is ongoing in Phoenix, Arizona. Another clinical trial is being developed by the team at CNH to address DIPG by disrupting the blood-brain barrier (BBB). This trial is expected to begin later this year,

The EANOSchool of Neuro-Oncology aims to support clinicians and researchers through a two-year course covering all aspects of Neuro-Oncology. It is a comprehensive high-level, postgraduate, in-depth two-year virtual programme covering seven weekends (one every two to three months) over a period of two years in neuro-oncology aiming to provide education on all aspects of the discipline including basic science, epidemiology diagnosis and treatment of all neuro-oncology conditions for adults and children as well as supportive care for survivors and end of life care and research to healthcare professionals and basic scientists planning a career in the field. The application deadline is 30th July and the course starts on 7th October.

The Department of Neurosurgery at UHB NHS Foundation Trust is inviting applications for a Surgical Neuro-Oncology Fellowship. The Fellowship will be based at the Queen Elizabeth Hospital Birmingham. The application deadline is Tuesday 21st June.

Last week we reported on The American Society of Clinical Oncology (ASCO) annual meeting and a presentation at ASCO where researchers suggested that the gut microbiome may be a viable targetable biomarker to improve immunotherapy responses in those with glioblastoma.

If you found that interesting you might like to take time to read this polemic from Dr Michael Sanger – “Disease management’ has failed – it’s time for health systems to embrace proactive wellness.” Something to ponder over the weekend.

We will be at British Neuro-Oncology Society (BNOS) annual meeting in Liverpool next week. We are a conference sponsor, and we hope to see many of you there. There won’t be a research update next week but please do keep an eye on our Latest News page as the Young Researcher Award will be announced on Friday and there is sure to be other news coming out from the conference rooms.

As Sue Farrington Smith MBE, our Chief Executive, said last year: “We are proud to co-sponsor the Young Investigator Award with BNOS. It is so vital that young researchers are encouraged to remain in the field of brain tumour research as they are the future and will unlock this complex puzzle, getting us closer to a cure for this devastating disease.”

Indeed, it is researchers that bring hope.