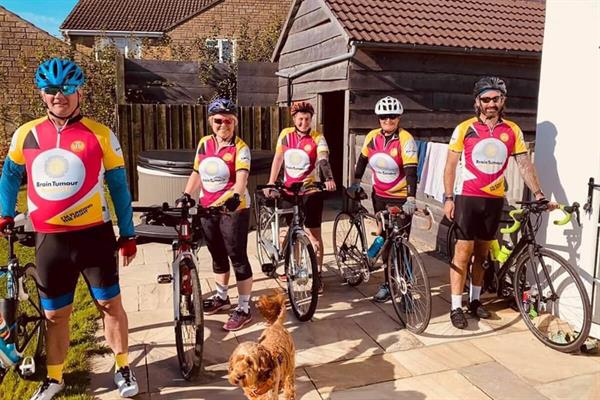 Team WellerFest – launched in support of Jenny Weller who has 10 brain tumours – is gearing up for its biggest challenge yet.

The group is combining three challenges: cycling John O’Groats to Land’s End, climbing to the summit of Snowdon and taking on Velocity 2, the fastest zip line in the world. It is the latest in a year-long series of fundraisers for Brain Tumour Research and ALK Positive UK. Previous events have included an abseil down Portsmouth’s iconic Spinnaker Tower and a ‘Big Dip’ in December.

The cyclists will set off on 30th March and plan to celebrate reaching their halfway point with the group’s mountaineers in Snowdonia six days later, ahead of the Velocity 2 challenge taking place on 5th April.

Jenny was diagnosed with a primary tumour in her lung and five secondary tumours in her brain in September 2020, as well as others in her neck and pelvis. She underwent a craniotomy to remove the largest of the brain tumours and used targeted drug therapy to try and slow the growth of the others.

In September 2021, progression of her tumours saw her undergo a three-week course of radiotherapy but in December it was revealed she had developed a further nine brain tumours.

Jenny’s health has deteriorated in recent months but she is aiming, if possible, to support the group by completing 10-15 miles per day on her e-bike and is desperately hoping to be able to climb Snowdon.

She said: “The guys have all been training so hard; they’ve been putting some serious miles in so we’re good to go and on a bit of a countdown now – it’s going to be a great way to finish Brain Tumour Awareness Month.”