Student set to graduate after studies halted by brain tumour 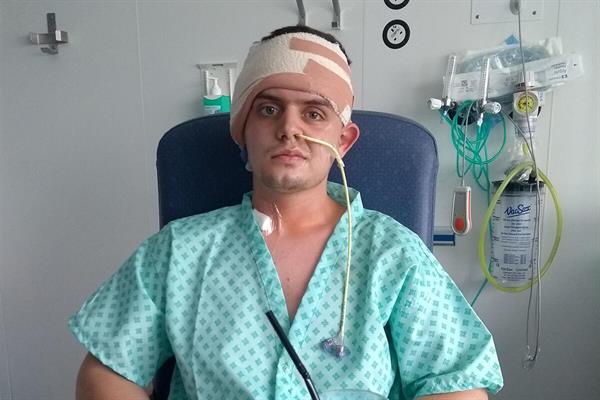 A 22-year-old student, who is on track to graduate after halting his studies during treatment for a brain tumour, is sharing his story this Brain Tumour Awareness Month.

Ned Hilton was enjoying his first year of student life when, in 2017, he noticed a change in the hearing of his right ear. After returning from a period of studying abroad, Ned was referred for an MRI scan. He said: “As I began the second year of my degree, I never imagined I’d receive news that I had a brain tumour.”

Initially, Ned was told that the tumour was a low-grade acoustic neuroma, but a subsequent MRI scan showed that the diagnosis was more serious than first thought and a biopsy revealed that it was a grade 4 medulloblastoma. Ned underwent two surgeries, followed by radiotherapy and chemotherapy and, in March 2020, his scan results were clear.

During Facial Palsy Awareness Week, Ned has shared how he suffered from drooping on one side of his face as a result of his tumour and invasive surgeries. He has undergone further surgery to repair the nerve endings and with the support of facial physio, he continues to regain control of his face.

Having taken a leave of absence from his degree, Ned returned to university last September to continue studying for a Bachelor of Arts (BA) in Modern Languages at the University of Birmingham. He has already defied the odds, studying abroad as part of his placement year and is set to graduate next summer.

He added: “This was my way of saying to the world: ‘yes, I am a slightly different person but my ambitions are still the same’.”