Ninety-year-old wing-walker takes to the skies 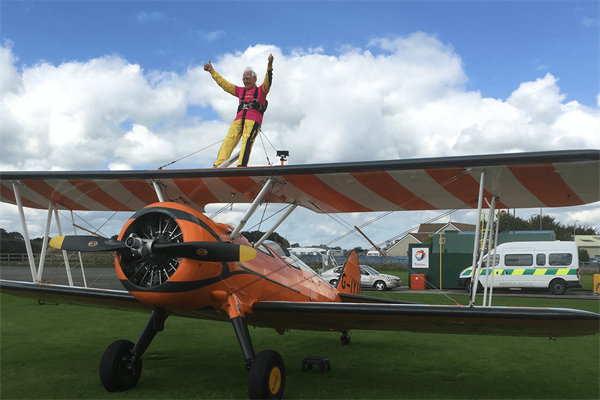 A 90-year-old great-grandfather joined the ranks of the UK’s oldest wing-walkers when he took to the skies to raise funds for Brain Tumour Research.

Gordon flew strapped to the top wing of a Boeing Stearman bi-plane, reaching speeds of up to 135mph this week. He was inspired to fundraise to mark the fifth anniversary of losing his eldest son, Martin, to a brain tumour.

Martin was diagnosed with a glioblastoma multiforme (GBM) whilst on holiday in 2016. He passed away just 10 weeks after his diagnosis, aged 55 on 20th August 2016. Martin’s wife Diane described him as “like his dad in many respects, particularly with his love of life” and said he would be “overjoyed” at Gordon’s wing walk.

He said: “I was a little surprised at all the reaction to me doing a wing walk at the age of 90. After all, I was strapped on so I couldn’t fall off!

“I am very grateful to everyone who has donated in Martin’s memory. It’s good to be helping to make a difference.”

If Gordon’s aerial achievements have inspired you, please donate via his JustGiving page: www.justgiving.com/fundraising/gordon-carter