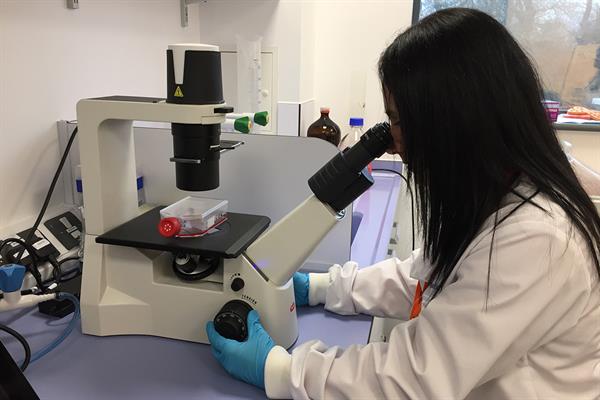 Firstly, two news items on glioblastoma that will be of particular interest to scientists at our Research Centre at Queen Mary, University of London. This brain tumour type is the most aggressive and most common primary high-grade tumour diagnosed in adults.

We begin with some fascinating research into a new stage of the stem cell life cycle could be the key to unlocking new methods of brain cancer treatment. Following brain stem cell analysis, through single-cell RNA sequencing, data mapped out a circular pattern that has been identified as all of the different phases of the cell cycle. A new cell cycle classifier tool then took a closer, high-resolution look at what's happening within the growth cycles of stem cells and identified genes that can be used to track progress through this cell cycle. When the research team analysed cell data for Gliomas, they found the tumour cells were often either in the Neural G0 or G1 growth state and that as the tumours became more aggressive, fewer and fewer cells remained in the resting Neural G0 state. They correlated this data with the prognosis for patients with Glioblastoma and found those with higher Neural G0 levels in tumour cells had less aggressive tumours. So, if more cells could be pushed into this quiescent, or sleepy, state tumours would become less aggressive. Current cancer drug treatments focus on killing cancer cells. However, when the cancer cells are killed, they release cell debris into the surrounding area of the tumour, which can cause the remaining cells to become more resistant to drugs. If, instead of killing cells, we put them to sleep could that potentially be a better way forward?

For the first time, scientists have discovered stem cells of the hematopoietic system in glioblastomas. These hematopoietic stem cells promote division of the cancer cells and at the same time suppress the immune response against the tumour so Glioblastomas. In tissue samples of 217 Glioblastomas, 86 WHO grade II and III Astrocytomas, and 17 samples from healthy brain tissue, researchers used computer-assisted transcription analysis to draw up profiles of the cellular composition. The tissue samples were taken directly from the post-surgery, resection margins - where remaining tumour cells and immune cells meet. The team were able to distinguish between signals from 43 cell types, including 26 different types of immune cells. To their great surprise, the researchers discovered hematopoietic stem and precursor cells in all the malignant tumour samples, while this cell type was not found in healthy tissue samples. An even more surprising observation was that these blood stem cells seem to have fatal characteristics: They suppress the immune system and at the same time stimulate tumour growth. When the researchers cultured the tumour-associated blood stem cells in the same petri dish as Glioblastoma cells, cancer cell division increased. At the same time, the cells produced large amounts of the PD-L1 molecule, known as an "immune brake", on their surface.

On diagnosis of an Ependymoma an adult is often treated with surgery followed by radiation. When a tumour comes back, there had been no standard treatment options. Recently, that’s changed, thanks to results from the first prospective clinical trial for adults with Ependymoma, which showed the benefits of a combination regimen including a targeted drug and chemotherapy.

Also of relevance to our Research Centre at QMUL, a study may have identified the cell of origin of Medulloblastoma. Using organoids to simulate tumour tissue in 3D – an approach also used by researchers at QMUL - this organoid model has enabled researchers to identify the type of cell that can develop into Medulloblastoma. These cells express Notch1/S100b, and play a key role in onset, progression and prognosis.

Research has been looking at how Medulloblastoma travels to other sites within the central nervous system and has shown that an enzyme called GABA transaminase, abbreviated as ABAT, aids metastases in surviving the hostile environment around the brain and spinal cord and in resisting treatment. These findings may provide clues to new strategies for targeting lethal Medulloblastoma metastases.

You can register to join an online lecture on the molecular analysis of paediatric Medulloblastoma and vulnerabilities, the development of models that recapitulate the patient’s diseases and how models allow to identify new therapies using a pre-clinical pipeline. It is on July 13th.

From the 12 – 15 of August you can watch ‘The Masters  Live World Course in Brain and Spine Tumour Surgery’ – this event won’t be streamed or saved on social media and registration is free.

Grounds for optimism to end with as a prominent clinician/scientist believes Glioblastoma outcomes could change for the better soon. Frederick F. Lang Jr, MD, chair of neurosurgery at The University of Texas MD Anderson Cancer Centre, and a co-leader of the institution’s Glioblastoma Moon Shot programme says ““I am optimistic that we are going to see changes in the survival as we start to [better] understand the groups of people we're treating, and as we separate out the tumours more precisely and classify them better. Then, as we understand the biology of [the disease] better and better, we're going to see changes in the near future terms of survival.” The University of Texas MD Anderson Cancer Centre is pursuing several novel approaches, including viro-immunotherapy and genetically engineered natural killer cells to treat patients with GBM, while also conducting tumour analysis to better comprehend the disease.

Whether to find out more about the Glioblastoma tumour microenvironment work or research into Medulloblastoma carried out at our Queen Mary University of London (QMUL) centre, the techniques at the forefront of tumour neurosurgery being employed by Consultant Neurosurgeon Kevin O’Neill at our Imperial College, London Centre or the work into Meningioma and Acoustic Neuroma ( Thursday was Acoustic Neuroma Awareness Day) that Professor Oliver Hanemann focuses on at our University of Plymouth Centre, it is always worth checking our Research News pages and for an overview of our research strategy check out  Brain Tumour Research – our research strategy.

Finally, a request for you all to support our #StopTheDevastation campaign – click through, find out more, get involved and say #NoMore to brain tumours.