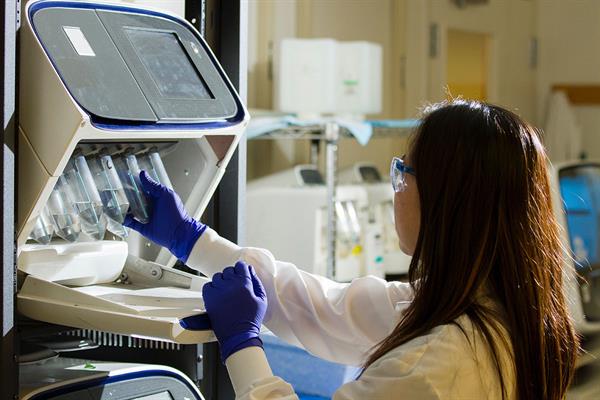 Medulloblastoma can spread through the spinal fluid and be deposited elsewhere in the brain or spine. Radiation therapy to the whole brain and spine followed by an extra radiation dose to the back of the brain prevents this spread and has been the standard of care. However, the radiation used to treat such tumours takes a toll on the brain, damaging cognitive function, especially in younger patients whose brains are just beginning to develop. This study suggests that children with “average risk medulloblastoma” can receive a reduced radiation “boost” to a smaller volume of the brain at the end of a six-week course of radiation treatment and still maintain the same disease control as those receiving radiation to a larger area.

Medulloblastoma is of course an important part of the research focus at our Centre of Excellence at Queen Mary University London (QMUL) where Professor Silvia Marino and her research group are studying the tumour’s epigenetics. In May we were able to announce a major funding boost for childhood tumours as, supported by our member charity the Children’s Brain Tumour Foundation, an investment of £144,000 was made to increase her team.

Why do older people often fare worse in treatment for glioblastoma and have a lower chance of responding well to chemotherapy?  Scientists have been studying a gene called TP73-AS1 and know that active TP73-AS1 makes cells more resistant to chemotherapy. The gene is disproportionately active in people with glioblastoma due to heightened levels of a protein called YY1, which activates the TP73-AS1 genes. The same elevated levels — for both YY1 and TP73-AS1 — are detected in elderly people, leading the researchers to suggest that the protein and the gene contribute both to the aging process and to causing glioblastoma.

A British man who rejected the standard of care to treat his brain cancer has lived with a glioblastoma growing very slowly after adopting a ketogenic diet (KD), providing a case study that researchers say reflects the benefits of using the body's own metabolism to fight glioblastoma instead of chemo and radiation therapy. This is the first evaluation of the use of ketogenic metabolic therapy (KMT) without chemo or radiation interventions, on a patient diagnosed with IDH1-mutant glioblastoma.

This will be read with interest by scientists at our Imperial College London Research Centre, where tumour metabolism and the ketogenic diet are areas under their spotlight.

Using clinical, molecular, and radiomic markers researchers have built a clinically relevant model to help predict if CAR T-cell therapies are likely to extend the lives of high-grade glioma (HGG) patients. Data has been presented from a Phase I clinical trial on 60 HGG patients, who underwent surgical resection and CAR T- cell administration in the resected cavity. The researchers obtained baseline data points from patients before surgery and  CAR T- cell treatment, aiming to identify the biological features that could be incorporated into a model predictive of their survival. The researchers claim "we have developed an explainable machine learning model to predict overall survival for high-grade glioma patients treated with CAR T-cell therapy."

Noxxon, a biotechnology company focused on improving cancer treatments by targeting the tumour microenvironment, has announced positive results from the second cohort in its Phase 1/2 study of NOX-A12 in combination with radiotherapy in patients with glioblastoma.

The UK pharmaceutical company Evgen Pharma PLC says that it has made further progress on its SFX-01 drug candidate, indicating it might help metastatic breast cancer patients, and outlining further plans to test it on glioblastoma

A vaccine has been seen to significantly improve survival outcome over standard-of-care treatment in patients with newly diagnosed glioblastoma. Among 57 patients who had received eight doses of AV-GBM-1, a personalized cancer vaccine, over approximately six months, the median progression-free survival was 10.4 months with AV-GBM-1 compared to the 6.9 months that had been observed with radiotherapy plus the chemotherapy temozolomide in a different study; this translated to about a 50% improvement over the established standard of care for this population.

In a new study researchers have shown that the nucleoside transporter ENT2 may offer an unexpected path to circumventing the blood-brain barrier (BBB) and enabling targeted treatment of brain tumours with a cell-penetrating anti-DNA autoantibody.

News of two clinical trials for recurrent glioblastoma next;

Secondly this new clinical trial is also aimed at individuals with newly diagnosed lesions in which there is no mutation of the IDH gene – so-called “wild type” glioblastoma – as well as individuals who are experiencing a recurrence. The hope is that it’s adaptive multi-modal function will speed up how quickly discoveries can be made and new potentially efficacious drugs can be available for use.

Finally a Latest News post from earlier this week is of interest to anyone in the research  community as the charity spend for medical research falling. At Brain Tumour Research we are hugely appreciative of our campaigners and fundraisers who have responded to this turbulent year with magnificent support for our vital work but the sector wide impact of the pandemic cannot be ignored.