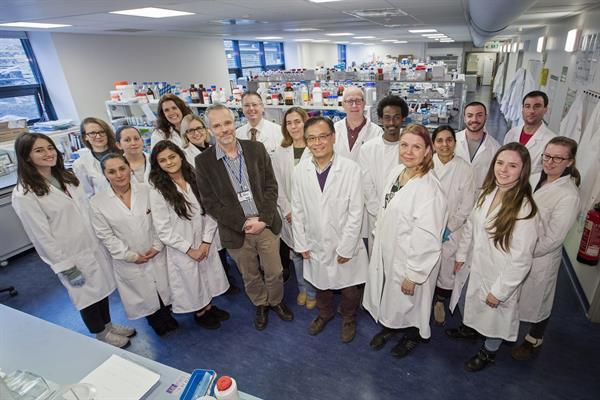 Exciting news from our University of Plymouth Research Centre to begin with this week as a simple blood test could replace surgery for some brain tumour patients. Researchers have discovered a biomarker which helps to distinguish whether meningioma is grade I or grade II.

The grading is significant because lower grade tumours can sometimes remain dormant for long periods, not requiring high risk surgery or harsh treatments. Tumours classified as grade II can progress to become cancerous and more aggressive treatment may be needed in order to try to control their spread.

Currently meningioma patients are usually put on watch and wait, undergo radiotherapy or have surgery in an attempt to remove the tumour. Between 70 and 85% of meningioma cases are lower grade so, if the blood test – or liquid biopsy – is carried out these patients may well be spared surgery or radiotherapy.

Congratulations to Professor Hanemann and his team for this exciting development and he told us “In this study, we identified FBLN2 as a novel biomarker that can distinguish grade II from grade I meningiomas” and this “has significant potential to improve the diagnosis, treatment, prognosis and follow-up of meningiomas.”

Brain Tumour Research is proud to once again be joint sponsor, alongside The British Neuro-Oncology Society (BNOS), of the BNOS Young Investigator Award 2021.The BNOS Council is now inviting nominations for a young researcher who has made an outstanding contribution to the field of neuro-oncology in the UK. The recipient will be invited to speak during a dedicated session at the BNOS online meeting, for which their conference fees will be waived. In addition, the recipient will receive an award of £2,000 to attend one (or more) other neuro-oncology conference in the year of the award.

An early clinical trial in glioblastoma patients has shown that  an experimental spherical nucleic acid (SNA) drug was able to penetrate the blood-brain barrier and trigger the death of tumour cells. Evidently this is the first time a nanotherapeutic has been shown to cross the blood-brain barrier when given through intravenous infusion and alter the genetic machinery of a tumour to cause cell death.

Industry update from the US as orphan drug designation has been given to the CDK2/4/6 inhibitor, NUV-422, for the treatment of patients with malignant gliomas. NUV-422 is currently being evaluated as a treatment of adult patients with recurrent or refractory high-grade gliomas in a first-in-human, open-label, phase 1/2 dose escalation and multiple expansion cohort study.

News of a potential new pathway to treating radiation-resistant glioblastoma now, as research findings indicate that an adhesive cell surface protein known as N-cadherin — or N-cad — may be key in overcoming glioblastoma’s resistance to radiation therapy. It is known that in glioblastomas, some tumour cells are resistant to radiation and that these surviving cells continue to reproduce and spread throughout the brain, leading to tumour regrowth.  The surviving tumour cells have stem cell-like properties, and are referred to as glioma stem cells, or GSCs. They are innately less sensitive to radiation than the rest of the tumour. The research team found that resistant GSCs are more adhesive and cluster together because they express increased levels of N-cad protein, which augments their resistance.

Finally a bit of campaigning news that is of relevance to the research community as the Chair of APPGBT calls for research funding. At a Westminster Hall debate this week Derek Thomas MP, Chair of the All-Party Parliamentary Group on Brain Tumours (APPGBT), emphasised to fellow MPs the need for funding into brain tumour research. The debate was called by Daniel Zeichner MP and was looking at the “Future of research and development funding”.

The brain tumour research community is very fortunate to have so fierce a parliamentary advocate as Derek Thomas.

Our Centre of Excellence at the University of Plymouth