Dad seeks heroes who saved the lives of his family 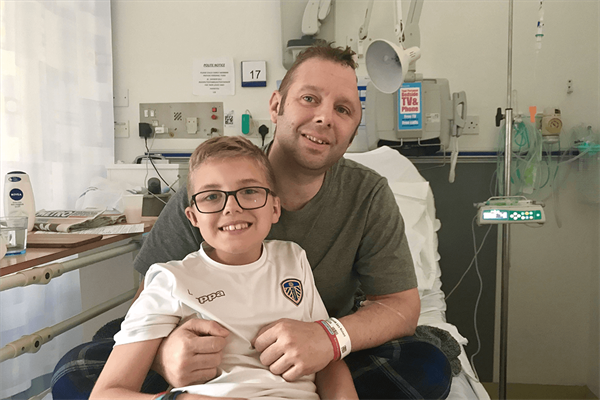 A single dad is hoping to find the heroes who helped him, his son and dog after a nightmare motorway crash caused by a brain tumour.

Gary Fordham, 43, suffered a seizure whilst driving home to Bradford following a Christmas visit to his parents in Swindon in 2018. The van he was driving turned and flipped on its side, ending up facing oncoming traffic on the hard shoulder.

Thanks to the heroic action of several motorists who stopped, Hayden and his dog Buster were helped safely out of the van and they were able to let the emergency services know their location. Remarkably, Gary, Hayden and Buster escaped with only minor injuries.

After waking up in hospital, Gary was told he had a brain tumour. He underwent an awake craniotomy which confirmed it was an astrocytoma. A few days after surgery, he was diagnosed with a bone flap infection and needed a second operation to remove part of his skull. After a year-and-a-half, he is still waiting for an operation to replace the missing bone flap with a titanium plate.

As Gary and Hayden approach the second anniversary of their shocking New Year’s Eve ordeal, they are hoping to find the people who helped them at the scene of the crash.

Gary said: “I’ve always regretted that I never got to thank the wonderful people who stopped to help us on the M6. I will be forever grateful for what they did that day. It would be lovely if Hayden and I could meet them, to express our sincere gratitude.”