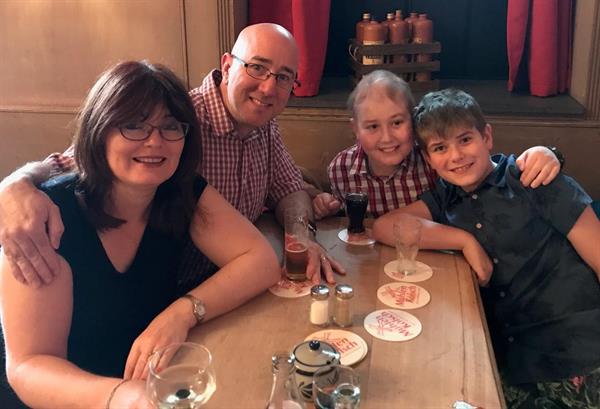 A family from near Aylesbury in Buckinghamshire are marking the second anniversary of the death of their son to a brain tumour with a gift of £187,500 to fund a researcher over the next five years at Queen Mary University of London (QMUL).

Jane and Peter Gardiner lost their 13-year-old son, Ollie on 19 November 2017, two and a half years after he was first diagnosed with a high-grade medulloblastoma.

Having suffered with what seemed to be a reoccurring tummy bug, his parents paid privately for Ollie to have an MRI scan, which revealed the tumour.

Ollie underwent surgery and further emergency craniotomies, chemotherapy and radiotherapy, but his cancer returned and had spread throughout his brain and into his spine. With no further treatment available on the NHS, the family launched an appeal. Incredibly, Ollie’s Fund raised nearly £500,000. However, despite pioneering treatment at Harley Street and experimental immunotherapy in Germany, nothing could be done to save Ollie.

Peter, himself a graduate of QMUL, said: “We feel tremendous guilt that despite all the enormous support and fundraising from the community and all the treatments we pursued to keep him alive, we failed Ollie, but the sad fact is that much more research is needed to find a cure for this devastating disease.”

Chief executive of Brain Tumour Research, Sue Farrington Smith MBE, said: “The tragedy of Ollie’s story reminds us that brain tumours are indiscriminate; they can affect anyone at any age. What’s more, less than 20% of those diagnosed with a brain tumour survive beyond five years compared with an average of 50% across all cancers, and we cannot allow this desperate situation to continue.

“Losing a child to a brain tumour is devastating; you never get over it. I know a little of what the family are going through, having lost my sister’s little girl Alison Phelan to a brain tumour just three weeks before her eighth birthday. As a family we were shocked at the lack of awareness and horrified to discover how little research was going into brain tumours and were determined to change this.

“Brain Tumour Research is indebted to the Gardiner family for their incredible support in funding the fight against brain tumours. Together we will make Ollie’s light shine even brighter.”