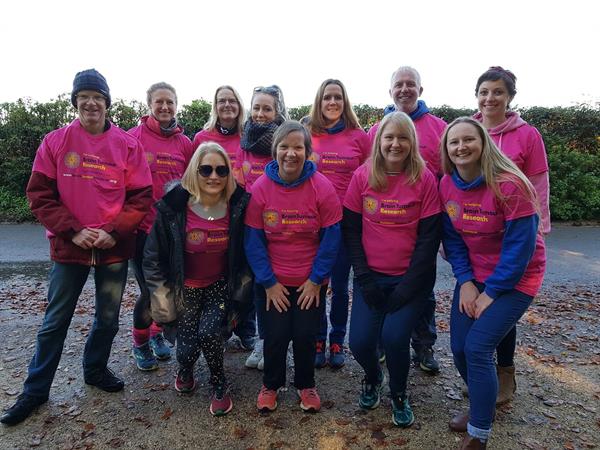 A team of 24 has completed a half marathon in support of a dad-of-five living with terminal brain cancer.

Emma Brown, 39, from Quedgeley, was among a group of close friends and family members taking part in the Stroud Half Marathon, on Sunday 27 October. For every step of the way, she was thinking of her husband, Ian Brown, who lives with multiple brain tumours.

Inspirational Ian recently underwent gamma-knife treatment – a type of radiation therapy – at the Bristol Royal Infirmary (BRI). The Pride of Britain award-winning dad has outlived his initial prognosis of three months and keeps a positive mindset despite the difficult days.

Ian’s ordeal began five years ago when, after a period of feeling unwell, he was diagnosed with lung cancer. His right lung was removed by surgery and, having thought he’d seen the end of his illness, he faced a devastating blow in 2016 when his cancer returned and spread to his brain.

Despite undergoing three debulking surgeries and radiotherapy, Ian has multiple brain tumours which are still growing.

Emma said: “It was wonderful to be joined by so many people at the Stroud Half Marathon. It made me realise just how much of a support network Ian and I have around us.

“Running has been a huge coping mechanism over the past few years and I was pleased to raise more than £1,100 for Brain Tumour Research. The best part was seeing Ian at the start and finish line with our eight-year-old twins, Freddy and Lily-May, and that was really emotional too.”

Ian added: “It meant the world to me to see Emma and our wonderful friends, colleagues and family members taking on the half marathon. For many of them, it was the furthest they’ve ever had to run and, though I was too ill to take part, I have such fond memories from the day.”