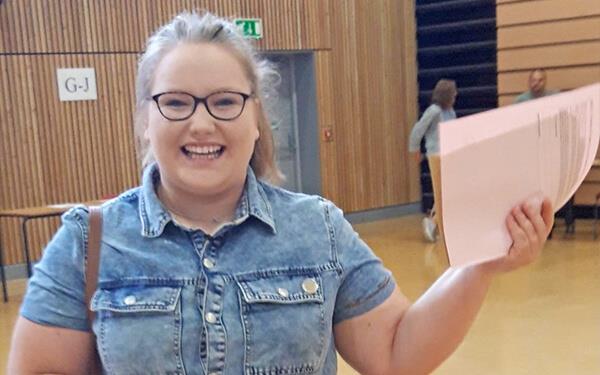 Today’s A-level results were especially significant for 18-year-old Ella Green whose achievements mean she is off to Keele University to pursue her ambitions to become a paediatric nurse.

Ella, from Flitwick in Bedfordshire, had originally set her sights on becoming a lawyer but her career choice was influenced by her sister’s brain tumour diagnosis. Lucy died at the age of 12 in 2017 just a month before Ella sat her first GCSE.

Despite the loss of her only sibling, Ella got through her GCSEs and maintained her studies throughout sixth form.

She said: “Losing Lucy so close to sitting my GCSEs was very traumatic, but I realised I needed to carry on going to school after losing my little sister to keep some sense of normality and because it provided a distraction from the grief and sadness that surrounded me at home. I originally had plans to go into law after my A-levels and had even had done work experience shadowing lawyers and going into courts. Before Lucy fell ill, I was so sure of the path that I wanted to follow.

“We were able to keep Lucy at home during the final stages of her illness and, along with Mum and Dad, I learnt preventative medicine like buccal training (delivering an emergency rescue medication) in case Lucy had a seizure, how to administer a nasogastric tube, as well as general medication and first aid. I was very much involved in Lucy’s care routine before and after school, which allowed me to help give my mum a bit of a break.

“I started to feel that learning to care for people might be a gift from Lucy and the idea to change my ambitions from law to paediatric nursing was born."

She added: “I often feel lonely now that Lucy has gone and it is very hard seeing my friends with their siblings, hearing them talking about trips and days out they have planned. It’s hard knowing that I won’t ever be an aunt and that Lucy will never be my maid of honour.

“It will be nice to have a fresh start at Keele and make new friends who never knew Lucy. It will be a chance to tell them all the good stuff – about the Lucy before and of course I will tell them all about how her legacy has brought about my commitment to forge a career in children’s nursing.”