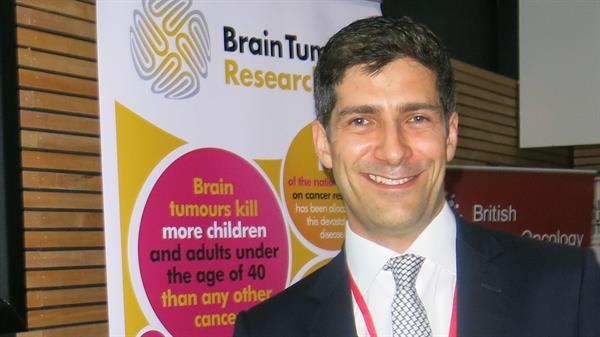 The decision by the review panel, led by Dr Simona Parrinello, was unanimous. Rasheed spoke this morning during a dedicated session at the annual BNOS conference, for which his conference fees were waived. In addition, he received an award of £2,000 to attend one (or more) other neuro-oncology conferences.

Each year, the BNOS Council invites nominations for a young researcher who has made an outstanding contribution to the field of neuro-oncology in the UK.

Rasheed took time out of his neurosurgical clinical training to undertake research in brain metastases, which occur in approximately 40% of all primary cancer patients. When this happens it is very difficult to predict survival and recurrence, making it a challenge to personalise treatments by finding the right balance of surgery, radiotherapy and chemotherapy. Rasheed discovered two proteins that could help to indicate which patients were at highest risk of recurrence and which would respond best to radiotherapy. These were then matched with biomarkers that could be identified on an MRI scan, therefore avoiding the need for a biopsy to identify which patients should be treated most aggressively and which should be kept under close monitoring.

In addition, his MRI research gave insights into varying immune responses at the margins of brain tumours that are paving the way for a study in metastatic melanoma patients treated with immunotherapy. Finally, he is working up a proposal in partnership with the NCRI brain metastasis subgroup to compare different types of surgical resection, in order to discover the best way to tackle this difficult tumour type.