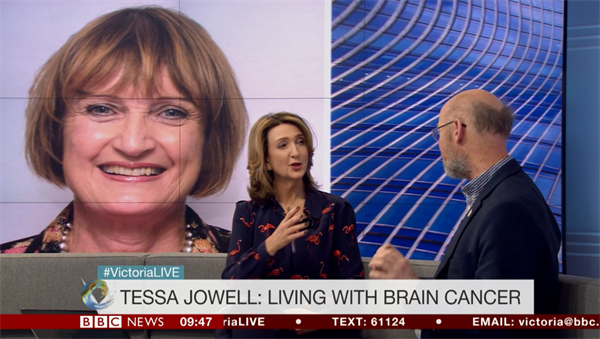 Ahead of tomorrow's House of Lords debate on cancer treatments and life expectancy, former Labour Minister Baroness Tessa Jowell has been talking about her glioblastoma diagnosis on BBC Radio 4 for the first time today. This subject was also covered on BBC Two’s Victoria Derbyshire show this morning, including our Director of Research, Dr Kieran Breen, highlighting the importance of research into new treatments to improve outcomes for patients. Kieran told Victoria: “We need to invest in brain tumours. Unfortunately, in the UK in the past 20-30 years, the investment just hasn’t been there”.

In particular, Tessa Jowell has been addressing the issues around adaptive clinical trials. These involve the testing of a number of drugs within the same trial rather than just one, as happens at present. The dose can be changed depending on whether the drug is working or whether there are side effects. If the drug isn’t working, the person can be offered one of the other medicines which are being tested. This is more efficient and is becoming more common for conditions such as brain tumours where there are very few effective treatments available. But, we need to have the staff and facilities to carry out such drug trials. Only 6% of people with brain tumours get the opportunity to take part in clinical trials compared with 13% for breast cancer and 61% for leukaemia.