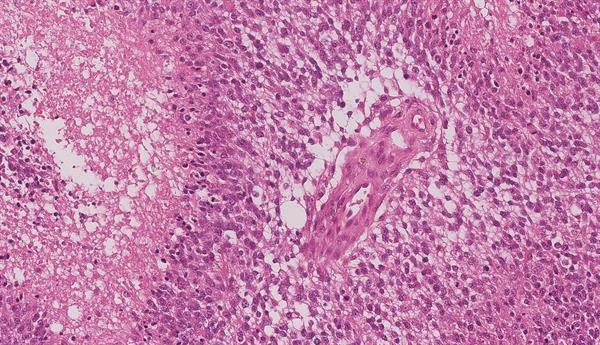 Glioblastoma, the most common and aggressive form of brain cancer, typically fails to respond to treatment or may rapidly become resistant to currently available drugs.

A study published in the journal Cancer Cell, carried out by the University of California San Diego School of Medicine, identified a strategy that pinpoints a genetically distinct subpopulation of patients with glioblastoma that is particularly sensitive to drugs like cilengitide that target a factor on the surface of the cell known as integrin αvβ3 and which is linked to the progression of GBM.

The research uncovered that some people with GBM have a unique genetic signature that makes them highly susceptible to this drug.

Cells which express the integrin αvβ3 protein on their cell surface use a mechanism called Glut3 to import glucose into the cells, which is required for the cells to make energy. Glut3 is a very efficient mechanism by which tumour cells take up glucose even in very low glucose environments, such as the brain. Tumours with this type of import mechanism are dividing more rapidly and are more likely to spread. However, blocking integrin αvβ3 using the drug cilengitide turns off Glut3 and therefore blocks the cells’ source of energy.

The researchers found that about 15% of patient-derived glioblastoma stem cell models used Glut3 to uptake glucose and therefore attacking these tumours with cilengitide was effective to stop the cells dividing. Cancer stem cells, which are the precursors of tumour cells, also rely on Glut3, so this may be a mechanism by which these cells could be targeted. Research carried out by our Centre of Excellence at Queen Mary University of London also focuses on cancer stem cells and how we can identify potential therapeutic agents.

This research has so far been conducted in cells in a dish and we don’t know whether it works in the body. The next step would be a clinical trial in which patients were selected based on their genetic profile. It is clear that targeting therapy is a key way forward.