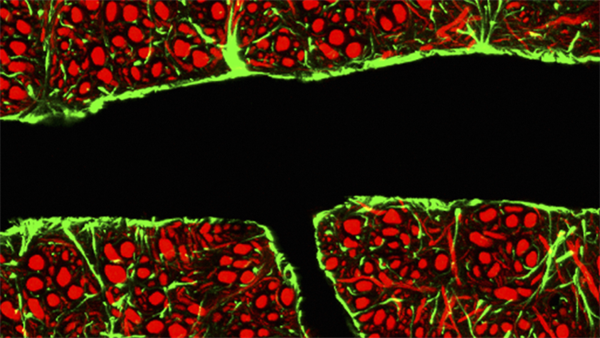 The preliminary results of an exciting clinical trial for people with recurrent glioblastoma (GBM) were announced at the National Cancer Research Institute meeting in Liverpool yesterday.

There are very few treatments available for people with recurrent GBM and the average survival time is less than 15 months following surgery, radiotherapy and chemotherapy. Therefore, it is essential that new and more effective therapies are identified to improve these terrible survival rates. However, one of the challenges facing the development of new drugs is to ensure that they reach the site of the tumour. The brain is surrounded by a protective membrane called the blood-brain barrier (BBB) which prevents drugs crossing from the blood to the tumour. But recent research has suggested that this membrane (pictured) may be disrupted in certain types of tumours, such as recurrent GBM, and that other anti-cancer drugs may be able to leak across the membrane and enter into the tumour cells. One such drug is olaparib, which is currently used for the treatment of ovarian cancer. It works by making the tumour cells more sensitive to other anti-cancer drugs or to radiotherapy.

An initial study has been conducted with 48 patients who had relapsed GBM, some of whom had undergone repeat surgery. The patients were treated with a combination of olaparib with temozolomide. These were compared with patients who had been treated with temozolomide alone, which is the standard therapy for GBM. After six months, the tumour had remained stable in 39% of the patients on the combined drug therapy when compared with only 18% taking temozolomide alone. This suggests that the combination of the drugs can slow down the development of the tumour. However, there were some serious side effects of the combined drugs, which caused some patients to be withdrawn from the trial.

Our Director of Research, Dr Kieran Breen, says: “These results are promising, as it shows that some drugs, which had not previously been thought to cross the BBB, may be able to get to the site of the tumour. So, there may be other drugs which could also access brain tumours. Our Research Centre at the University of Portsmouth is a leader in the field of BBB research and is working hard to better understand how we may be able to predict which drugs could get from the blood to the site of the tumour.

“However, the results are still very preliminary and further trials need to be carried out to find out whether the positive findings are maintained after the initial six-month period. There were also concerns about toxic side effects. The researchers are currently carrying out another study to assess whether olaparib may also potentiate the effect of radiotherapy on recurrent GBM, and we will be closely monitoring the results.”