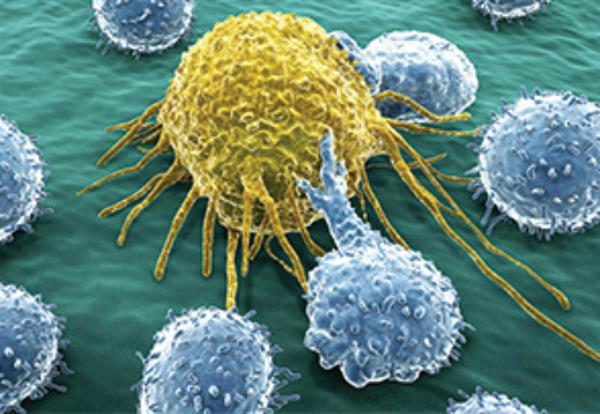 The US Food and Drugs Administration (FDA) have recently announced the approval of a new product for the treatment of leukaemia. This therapy is ground-breaking because it was the first time a patient’s own immune cells have been engineered to recognise tumour cells as being harmful in order to eliminate them. This is an exciting advance in the area of cancer therapy development, but what does it mean for the future treatment of brain tumours?

In a large number of cancers, including brain tumours, the body’s immune system is essentially tricked into believing that the cancer cells are normal and therefore the immune response remains dormant and does not destroy them. This allows the cells to continue to divide and multiply and for the tumours to grow. Immunotherapies, which can be used to treat certain cancers, work to re-activate the immune system so that the cancer cells are recognised as being “foreign“ and are ultimately destroyed by the immune cells. This approach is being used to treat many different types of cancer, although the results of initial immunotherapy trials for the treatment of brain tumours published earlier in the year were disappointing.

Another approach is to modify the genes within the body’s blood-based immune cells so that they can target specific components on the surface of the tumour cell in order to destroy it. These are called CAR T cells. The immune cells are removed from a patient’s blood and grown in the lab where specific genes are inserted into them. This changes their ability to identify what are “foreign” cells within the body. The engineered cells are then re-injected into the patient’s bloodstream where they immediately target blood cancer cells that are present in leukaemia. Other early stage clinical trials are currently underway to determine whether this approach could be used for other types of cancer.

While there are no specific CAR T-based therapies currently in clinical trials for the treatment of brain tumours, a number of other novel therapies are under development, although these are all still at an early stage. DCVax-L uses brain tumour tissue removed following surgery to prime a patient’s own immune cells and therefore make them more efficient at identifying and destroying the tumour. The blood cells are removed from the patient, exposed to factors derived from the tumour to activate them, and then re-injected into the patient. It is hoped that these will then ultimately target and kill the tumour cells.

Another approach is to use viruses to change the genetic make-up of the tumour cells. DNX-2401 is a virus which specifically binds to glioblastoma cells and then injects in a gene which causes the cells to commit suicide. Another way in which viruses can be used is to insert genes into the cells which will make them more susceptible to the actions of specific drugs.One of these is Toca 511 which injects the gene specifically into tumour cells to make them much more susceptible to the drug which can be given at a relatively low dose that does not harm other cells in the brain.

In addition to making new viruses, a recent report has suggested that existing ones, such as the Zika virus, could also be used to treat brain tumours as it preferentially targets cells in the brain which are growing rapidly, such as tumour cells, while having little effect on normal brain cells. Some of the key research in this area is being carried out by Harry Bulstrode at the University of Cambridge who was named the Brain Tumour Research/BNOS young researcher of the year in June this year for his work in the area.

All of these therapies are classified as an Advanced Therapy Medicinal Products (ATMPs) which are regulated by the Committee for Advanced Therapies at the European Medicines Agency, of which I am a member. There is a large number of these therapies in early stage clinical trials to treat many different diseases, including brain tumours. It is a rapidly evolving field with new advances being made almost on a daily basis and I think that it shows great promise for the future. But, we also need to consider that these cutting-edge therapies are not without their risks. Indeed, some of the early studies on leukaemia-associated CAR T therapies had significant adverse effects with one trial having to be halted at an early stage. As with all new therapies, it is key to demonstrate that they are safe as well as being effective. This is one reason why clinical trials can take a relatively long time, especially when testing state-of-the-art technologies such as this.

Through our centres of research excellence, Brain Tumour Research is forging ahead to further understand the changes that occur when nerve cells transform into tumour cells, as this is information is key for the development of new ATMPs. We also constantly monitor all developments in the area of new therapy development and we will ensue that our supporters will be kept up to date with all of these advances.