Celebrity Supporter
“I find the situation with the underfunding of brain tumour research really surprising. Brain tumours kill more children and adults under the age of 40 than any other cancer, but don’t get anything like the research funding they need. It’s shocking. Whenever I tell people, they can’t believe it.”
Stephen lost his friend, pioneering fashion stylist Dizzy Downes, to a brain tumour in 2006. She had battled cancer for three years, enduring surgery and chemotherapy and searching fruitlessly for alternative therapies that might save her life. Stephen now campaigns for Brain Tumour Research, designing an exclusive brooch for the charity’s Wear A Hat Day and supporting its new partnership with retailer Hobbycraft in 2017 with three specially created hats.

Stephen Jones OBE talks about his friend, stylist Dizzy Downes, who inspired him to campaign for Brain Tumour Research…

Dizzy was one of the very first stylists. Working with photographers and directors, particularly on TV commercials, she just about invented the business back in the seventies and early eighties. I had met her in 1980, Dizzy had wanted a hat made for an ad and came to me. This was a new idea, having something specially made for a shoot, and I still remember the yellow hat with blue fruit that I created for her.

She became one of my dearest friends and benefactors as I grew my fashion business. We were extremely close. It was around 2003 when Dizzy started to feel unwell. She had been getting bad headaches and went to the doctor, who referred her for tests. A scan revealed a brain tumour. She had surgery but they couldn’t get it all; it came back. Dizzy decided to fight it using everything she could.

It was the early days of the internet and so she searched for ideas and suggestions everywhere. Dizzy had always been a healthy person and now she started eating organic and drinking vegetable juices. She even tried alternative therapies abroad; they were very expensive and didn’t really appear to work medically. I do think it all helped improve her quality of life a bit though. If you believe in something and it gives you hope, then it “works”. So many people can’t afford to make those choices so we were aware that she was very lucky. I supported her as much as I could, bringing her home and being there for her.

For three years, I watched my friend slowly ebb away. It feels like a discipline, something you have to do, but also a privilege, to witness someone close to you at the end of their life. It was an extraordinary experience. I learned that it’s not the length of your life that’s important, but the quality. The way you deal with cancer is so important. I remember Dizzy telling me: “I don’t want to die, not quite yet.” We are conditioned to label people and dictate emotional responses. If someone you love is dying then you are supposed to feel sad, yet I was grateful to be able to offer her something special, to be able to care for her as she went through something so awful.

Dizzy was very up and down, the doctors and the internet were saying different things and we were trying to make sense of it all. I saw her at her worst. Cancer touches so many parts of your life, brain tumours even more so. Dizzy needed practical help at home and a friend to accompany her on hospital visits. Simple, tactile things become more important and I used to massage her feet for her. She started losing contact with reality, so we would look at old photos together or I would read her poetry, trying to reach my old friend. Dizzy died ten years ago.

As a milliner, I have always had people coming to me saying that they need a hat because they are losing their hair due to cancer treatment. I’m very experienced with that now and talk to them about wigs and that kind of thing. Dizzy tended to go for turbans. Women find it especially hard, the loss of femininity is difficult to cope with, although there’s much less of a stigma about it now. People understand.

I find the situation with the underfunding of brain tumour research really surprising. It is a delicate balance, I understand that. I would hate to be the person who has to choose which types of cancer research should be funded best. Yet, brain tumours kill more children and adults under the age of 40 than any other cancer, but don’t get anything like the research funding they need. It’s shocking. Whenever I tell people, they can’t believe it.

When Brain Tumour Research originally approached me, I was very ready to support the charity. As I get older, I have become more aware of a sense of responsibility to society and deserving charitable causes. I try to do as much as I can, but this one is personal for me, plus with Wear A Hat Day there’s an obvious connection. 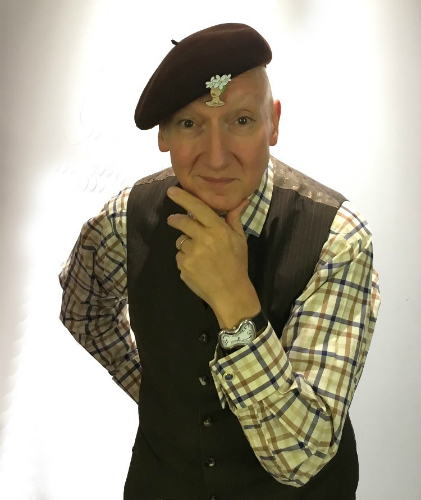