Celebrity Supporter
“Nan was the rock of our family…by the time they confirmed it was a brain tumour, there was nothing anyone could do…things happened so quickly. As soon as we got the diagnosis, she went downhill. It was like Nan just wasn’t there anymore. She couldn’t even talk really.”

She was the best nan ever. My dad wasn’t around when I was growing up so it was like I had two mums. Nan lived close by and used to pick me up from school and make cakes for me and my brother Keenan and sister Kirsty. I remember her feeding us until we could hardly move! She was the perfect cook.

Growing up, I was really close to her and would probably tell Nan more about what was going on in my life than Mum. She was always on my side.

Apart from a bit of a family history of migraines, which I suffer from too, everyone is pretty fit and healthy in my family. To be honest, I never thought serious illness could happen to us. My Grandad, Nan’s husband, is 75 now and still walks five miles a day, plays squash and loves his golf.

They first met when she was 18. Nan was in Clacton, eating chips from a cone by the seaside and he came along and nicked a chip from her! Grandad was immediately smitten. When I was a kid, we were all living in Knebworth, although both Mum and Grandad have moved away since Nan died. The memories are just too painful.
I remember when Nan was first diagnosed in 2009. I was 13 years old; the family were all open about it and we would talk about it. It took about a month to finally get the diagnosis. She was in hospital having tests during July. At first they thought it was a water infection, then they said it could be a bleed to the brain. By the time they confirmed it was a brain tumour, there was nothing anyone could do. She had an aggressive grade four glioblastoma multiforme (GBM) and its position meant it wasn’t possible to operate.

Near the end, Nan would be lying on the sofa, unable to get up. She would never usually say if she was ill so when she started telling us how bad she was feeling, we knew it was serious. Things happened so quickly. As soon as we got the diagnosis, she went downhill. It was like Nan just wasn’t there anymore. She couldn’t even talk really.
Nan died on 2nd September 2009, just four weeks after the diagnosis. Although it was a horrible and shocking experience for the family, I know that Nan would have preferred it to be quick like that. She was the rock of our family.

Now, I feel like I’m in a position to raise awareness and make a difference. Brain Tumour Research is a charity that means so much to me, because of Nan. This cause is close to my heart. As soon as I heard that Nan had been diagnosed with a brain tumour, I thought that’s it, she’s going to die. I knew it was a serious disease, but I had no idea, back then, that it kills more children and adults under the age of 40 than any other cancer. I can’t believe that there’s been so little money put into research. 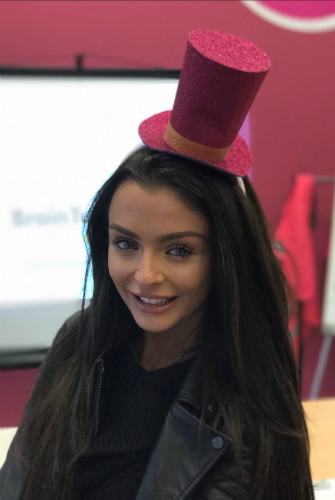