Help us fund the fight Together we will find a cure

Without dedicated volunteers, our work would not be possible

While every volunteer has different motivations, they all share a common goal – to help us find a cure for brain tumours.

Why I Volunteer - Emma Carrick

Emma Carrick, a 51-year-old from Milton Keynes, has volunteered for Brain Tumour Research following her husband Brian’s diagnosis in October 2016. Emma enjoys the networking and sense of community she gains from her volunteering and speaking to people who have had similar experiences. Now that Brian is doing well, the couple are looking forward to seeing U2 on five separate venues on their world tour later this year.

Emma tells us about her volunteering…

I have volunteered at the Brain Tumour Research charity for nine months, since my husband Brian’s diagnosis. After suffering a seizure, Brian was diagnosed with a grade 2 oligodendroglioma in October 2016. Having endured surgery, radiotherapy and chemotherapy, we are very pleased that he is doing well.
I heard about the charity when Brian, who was working as a contractor at Network Rail, was first admitted to Milton Keynes Hospital. While trying to distract myself from the intense situation I was in, having just been told the awful news that Brian had a brain tumour, I was handed the MK Citizen newspaper. I opened the paper to a double-page spread about local charities and there was a section about the Brain Tumour Research charity. I was amazed that the charity was based less than a mile away from my home, in Shenley Church End, where I have lived with Brian for 23 years.

We met with Sue Farrington-Smith and Sharon Stevens from the charity. It helped to know there were people we could ask for advice and they were so friendly.

I started volunteering in October 2017 and have never looked back. It’s been really nice to meet people in a similar situation and to feel like I am part of a community.

I also enjoy volunteering as it makes me feel like I’m giving something back, and it gives me a purpose. I’m not an athlete myself, but it’s great to know I’m helping our incredible supporters that take on big sporting challenges and other events for us.

Fortunately, life is a lot better at the moment. We are looking forward to seeing one of our favourite bands U2 live later this year, at five different concerts on their world tour. Brian is back contracting at Network Rail, who have been really supportive throughout his illness.

I would advise other people in a similar situation to ask lots of questions and write things down. I have had to learn to be patient – it takes years to recover from a brain tumour diagnosis – and have learnt coping strategies unique to me. Brain Tumour Research have been an invaluable support on the days where I feel anxious and it’s helped me understand that sometimes it’s okay to ask for help. 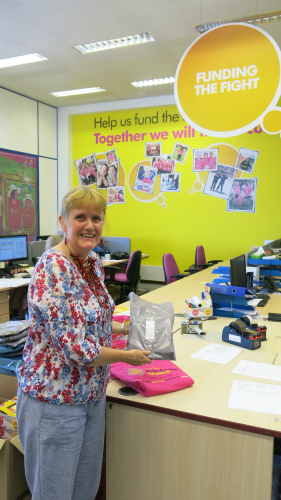