Proud Welshman, avid football and motorcycle fan, husband and father-of-two Wynn Humphreys was 72 when he died in March 2017. He had been diagnosed with an aggressive Gliobmastoma Multiforme (GBM) brain tumour and, in line with his wishes, his wife and daughters didn’t discuss his prognosis with him, in order for him to enjoy the precious little time he had left.

“In line with his wishes, we never talked to dad about the fact he was dying. It was such a difficult time as we found ourselves not being able to talk about his prognosis in order to shield him from the truth but we went through with it because it was what he wanted. Not being able to talk openly to his friends about dad’s illness was one of the hardest things but we did it out of love for my dad and to respect his wishes.”

Dad was a proud Welshman and my sister Lisa and I had a traditional Welsh upbringing, attending chapel and Sunday school. As we grew up, he imbued us with his love of sport and was so proud when we both played hockey for Wales at Under 18s.

A keen supporter of Everton Football Club, he was first aider for a local team at Bryncrug in Gwynedd before he and my mum Rhiannon moved to Aberystwyth. He was chairman of Penrhyncoch Football Club for many years, did a stint as groundsman and always loved just being around football. His other great passion was motorbikes, he loved his bikes and mum would ride pillion and had her own licence.

We’ve never been openly demonstrative as a family and although dad never gave us hugs or sat listening to us as we learned to read, we were very close.  He would call me a few times every day just to check I was OK. A few years ago I built a house in mum and dad’s garden so we’re next door neighbours too.

Dad had a strong work ethic, another quality he instilled in us. He left school at 15 and was employed in the forestry industry for 51 years – working for the Forestry Commission and then as an Area Manager with Tree Harvesting, BSW Harvesting and TillHill..  Just three weekmos after his “retirement” he got a job as a driver at Bronglais Hospital and would pick up and deliver samples around the Mid Wales area. He did that for five years right up until his diagnosis with a brain tumour.

He had two accidents in as many weeks in December 2015 when he was working and that is what first alerted us to the fact there was something wrong. He had started to feel really low and there was an occasion where he struggled to do the zip up on his coat. We took him to the GP who diagnosed depression but in early January 2016 we took him to the hospital after noticing he was dragging one of his legs and the side of his mouth had drooped.

Once in front of the consultant and explaining dad’s symptoms, they all seemed so vague that I wondered whether we would be thought of as time wasters. Fortunately, the consultant was someone we knew and must have realised something was untoward. Dad went for a CT scan and a chest x ray and, just two hours later, he was diagnosed with a brain tumour. In that day alone he had 38 visitors at his hospital bedside – his many friends and others he knew from his work at the hospital – gathered to be with us.

It was a grade four Glioblastoma Multiforme (GBM), a very aggressive type of brain tumour with a poor prognosis. An otherwise healthy man of 25 might expect to live for as little as 14 months, the best we could hope for dad would be 12.

Dad made it clear from the start that he didn’t want to know how long he had left. With the exception of a very small number of close family members, mum, my sister and I were the only ones who knew how serious things were; his condition was terminal and time was more precious than ever.

It was hard. Dad was a very sociable person and his many friends would often talk about “when he’s better” or “once he’s over this” but, of course, we knew the truth. Dad was never going to get better. We count ourselves fortunate that his diagnosis was quick and he was able to complete his treatment plan of radiotherapy and chemotherapy after surgery. Twelve months after his operation, a scan showed no new tumours which was great news.

However, in the weeks following this dad went into a steady decline. We went out and about as much as we could and would have breakfast at a café on Saturday mornings, and go out for lunch on Sundays and during the week.

As time went on, dad slept more and more. Despite the fact that he lost the ability to walk, we were able to keep him at home where he passed away peacefully on 30th March 2017. He was 72 and had been married to mum for 46 years.

In line with his wishes, we never talked to dad about the fact he was dying. I didn’t need to hear the words to know that dad loved me more than anything in the world. It was such a difficult time as we found ourselves not being able to tell him the truth about his prognosis, to shield him from the truth but we went through with it because it was what he wanted

It meant we weren’t able to say our goodbyes until he was unconscious in his last days. I think dad’s wish not to know how much time he had left meant he had a better quality of life than had he known.

Dad was a hard-working and straight-talking man. Integrity and trust were vitally important to him and I hope he would have been proud that mum and I stayed true to those things and that he trusted us to deal with the many health professionals that we encountered during this time.

It is shocking to think that brain tumours affect so many people and I am grateful that dad was diagnosed so quickly. You hear so many stories of people who wait many weeks or months causing a delay to their treatment. Dad had none of the symptoms you might expect – such as headaches or vomiting – and it is vital that more money is invested in researching brain tumours to better understand their cause and help make outcomes better for patients and their families.

Since dad’s death, we are doing what we can to get on with our lives as best we can without him. Mum is keeping herself busy in the house, my sister got married in Australia and I am back at work as a Healthy Lifestyle Manager with a Local Authority. I went back just five days after dad died and I think our society should have more empathy with those who are looking after someone who is terminally ill. Helping someone to have the best death possible is surely as important as bringing a new life into this world – perhaps we should have more generous leave allowances similar to parental leave. 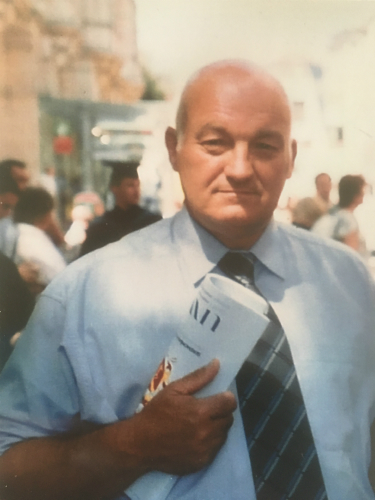