In February 2015, Winston Harris was healthy, happy and planning retirement with his wife. Just five weeks later, he passed away from an aggressive brain tumour. Leaving behind a wife, son and daughter in-law and two grandchildren, life had completely changed for the Harris family suddenly and without warning.

“No one could have prepared us for what we were told next. Following an MRI scan, mum called me to say dad had been diagnosed with a grade 4 glioblastoma, an aggressive type of brain tumour. It was shocking to see Dad deteriorate so quickly. It got to the stage where only palliative care was available, which was the hardest part for me.”

Here is Winston’s story, as told by his son Daryll…

My dad, Winston Harris, was never the type to sit still. Constantly on the go, he volunteered as a driver and worked part-time in a garden centre, despite retiring from his role as a production worker at Rover, where he had worked for 34 years. A fit and healthy 69-year-old, he loved nothing more than to socialise and be outdoors.

Born in the West Midlands, my dad lived there most of his life. Being from a relatively poor family, he went straight from school to working at Rover. He had a great pride in his job and an admirable work ethic. Though we didn’t have much money, I will always remember having so many opportunities as a child, as I knew my dad would do anything for me.

Strangely enough, it was in a West Midlands button manufacturing company (James Grove & Sons) that my dad met my mum, Anne. The two developed a great relationship, a strong bond cultivated through a mutual love of gardening. They were soon married and, to this day, one of my earliest memories was the reputation of the family garden. It was a great passion of both my parents and brought me a lot of joy as I grew up.

Growing up, the thing I loved the most about my dad was his ability to talk to anyone. He was sociable, a real people person, meaning we could go anywhere together and make new friends. He was the life of the party and often enjoyed a good old karaoke sing along (sometimes my wife Karen would be his backing singer).  My dad was never the sort to be miserable and would go out of his way to help others.

After retiring from his job at Rover, my dad moved to Cornwall with my mum. Though relishing the tranquil and relaxed Cornish lifestyle, he continued to work part time at a car hire company where he made some fantastic friends. Visiting my parents with my two children, my son Daniel developed a touching relationship with his Grandad, while my daughter was always going to be a nanny’s girl. I marvel at how much Daniel remembers of my dad, as he was just three when he passed away. They had a special connection and he would always joke about my dad’s big belly. All in all, my family was happy and life was good, until the day that everything changed.

It was the middle of February, 2015, when we first noticed something was wrong. dad was tending to his garden when he started to feel unwell. I was living in Christchurch, Dorset, at the time and my mum called me to say there was something wrong. I was in shock, he was fit and healthy only a couple of months previously, this couldn’t be the case. In fact, dad was planning to stop his work at the car hire firm to fully enjoy retirement with mum.

At first, the symptoms dad was experiencing included slurred speech and confusion. The doctors shrugged it off as a side effect of his medication, as he was on painkillers at the time. I can’t blame them for this, he was so healthy, how were we to know it was something far more sinister? However, mum suspected otherwise. She was worried dad had had a stroke, which was obviously distressing, but we reminded ourselves that people recover from them. Dad was admitted to the Royal Truro Hospital, where I rushed down to see him with my wife and two young children.

Over the next couple of days, dad’s condition remained roughly the same. I went back to Christchurch and mum kept us updated on his progress.

No one could have prepared us for what we were told next. Following an MRI scan, mum called me to say dad had been diagnosed with a grade 4 glioblastoma, an aggressive type of brain tumour. Collapsing to the floor, I couldn’t believe what she was telling me.

The next day, I rushed back to Cornwall to find dad in a terrible state. Affecting dad in ways I could not have imagined, the tumour altered his emotions, he was often very tearful and, on other occasions, extremely happy. He went from joyous to sad with no warning, it was awful to see.

After a few weeks in hospital, dad deteriorated further. In such a short amount of time, it was shocking to see him change from being strong and larger than life, to a man with a much smaller frame. It was a desperate situation for us all. We were told that due to the location of dad’s tumour, treatment options were limited. Subsequently, it was decided only palliative care could be given and finding this out was the hardest part, as I wished there was more we could do.

Sadly, dad passed away on 15th March 2015, less than five weeks after he was taken ill. It was a consolation for me that he didn’t suffer for long and my mum, my wife and I were by his side as he took his last breath.

Although dad’s illness brought a lot of sadness to our family, he would have been humbled that it also brought us closer to his youngest sister Rita and her family.

Looking to the future, dad’s illness has made me determined to help others. I am honoured to be hosting Lymington Precision Engineers’ annual golf day on 13th July 2018 to raise money for research into brain tumours. It is the third time the event has been held, however the second for Brain Tumour Research. I was first introduced to the Brain Tumour Research charity by my Mum, and I became aware of the invaluable work it does. For me, golf has been a therapeutic pastime since we lost dad, and, unlike gardening, it’s something I can say I was better at than he was. I am really looking forward to the event and know he would be so proud of me on the day. My ultimate hope is that one day brain tumours can be cured and, by sharing this story and organising fundraising activities, we are one step closer to achieving this.

A day I will never forget.

The Brain Tumour Research charity is determined to change this. 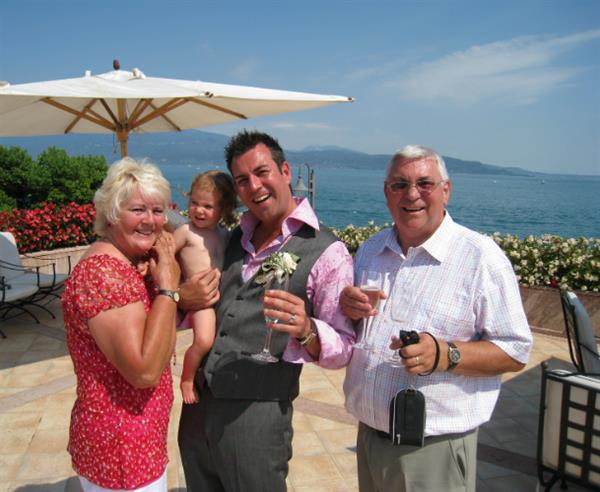