Lorry driver and father of two, Vince Treherne-Jones was initially diagnosed with a low-grade brain tumour just weeks after meeting new partner Gwyneth. Vince underwent surgery and treatment but his tumour continued to grow, eventually metastasising to other areas. The pair were married during his treatment and realised their dream of moving to Devon before Vince passed away in January 2015 at the age of 49.

“Throughout it all Vince remained brave and positive even when he was bent over in pain, unable to stand or walk. He died just three years and four months after we met. When he was first diagnosed people said I didn’t really know him and should walk away but I felt that he came into my life for a reason. By the time we married, he was disfigured by the tumour as it grew in his brain and affected his nerves. I didn’t care, all that mattered to me was that he was still alive.”
Vince’s wife Gwyneth tells his story…

After 12 years as a single mum to three children, I was looking for someone special when I joined a dating website. I was so nervous that I nearly blew it – the first-time Vince and I agreed to meet I stood him up without even a text message to say I wasn’t going.

When I finally summoned up the nerve to get back in touch he told me he had been waiting outside the pub with a bunch of flowers. Amazingly, he agreed to meet me the following night.

Despite my initial cold feet, Vince and I clicked straight away. Like me, he had grown up children (two) and was divorced. He was softly-spoken, kind, and a real gentleman. After all those years on my own, it was exciting to think about what the future might hold. Of course, the idea that our time together would be so tragically short never entered my head. I have never been a big believer in fate but, looking back, I feel it was meant to be and that Vince came into my life for a reason.

We saw each other regularly. Vince told me he had been suffering from severe headaches and had been to see an ophthalmologist but tests had failed to pinpoint a cause. The medication he was taking wasn’t helping and in November 2011, he collapsed at work as he was getting into his lorry cab. He was transferred from Reading to a specialist unit at the John Radcliffe Hospital in Oxford. It was just two months after we first met. People at work said I should walk away, that I didn’t really know Vince and owed him nothing. But I did know that we really liked each other, we got on well and I thought maybe we had a future together.

Scans revealed that Vince had a brain tumour, it was definitely low-grade and most probably a meningioma. We were told that it was very large, around the size of a grapefruit, and had been growing for a long time. The tumour had destroyed the bone behind his right eye socket and was in his optic nerve. Vince went into surgery in December. The operation to remove the tumour, a complex procedure which also included plastic surgery to reconstruct the area eaten away by the growth, lasted 15 hours. The sight in Vince’s right eye was irretrievable. Six days later, he was discharged.

Unable to drive, Vince lost his job. Without his pay packet, he had no way of paying his rent so he was homeless too. I opened my home to him as well as my heart. He was recuperating from the surgery and a few weeks later he was really struggling to control the pain with medication. I was horrified to see that a clear substance, cerebrospinal fluid, was leaking from his ear and nose. It got so bad that Vince had to hold towels to his head and face to soak up the liquid. Eventually we managed to get him back into hospital in March 2012 and he underwent a lumbar puncture and a craniotomy. Test results showed that Vince had a fungal infection – so rare that it had no name – and it was six weeks before an effective treatment regime was established and he was allowed home.

Things were made even more difficult by the fact I was in severe pain myself because of complications after knee replacement surgery. I struggled to get from my home in Fleet, Hampshire, to the hospital in Oxford on public transport and relied on my son Ollie to get me to and from the train station at the beginning and end of my journey. We struggled on. By the autumn, Vince’s headaches were back with a vengeance. Throughout it all, he said: “I’m going to fight this like a man.” He was always so brave but this time the pain was so extreme and it was the first time I saw him cry.

Part of Vince’s skull had to be removed leaving a massive dent in the right-hand side of his head. It was quite disgusting but it didn’t really matter, he was alive and that was all that mattered to me. Vince was discharged once more but by Christmas he was in agony once more. He was back in hospital in January 2013 and we were told that another tumour was growing.

It was extremely painful for me to witness Vince’s anger as he lashed out at me, telling me not to visit any more, that we were over. He seemed to have changed so much since we met. The gentleman I had fallen for had been replaced by an angry man, prone to outbursts of shouting and screaming. Although I knew these personality changes were caused by the disease it was hard not to take it personally.

My heart was breaking. It was very hard to see beyond the anger but I never considered walking away. Things seemed never-ending but, after another six weeks as an in-patient, Vince was allowed home. The next step was radiotherapy which took place in the spring of 2013 at Southampton General Hospital.

It was the first time in a long while that Vince was feeling OK and we decided to get married. The ceremony took place on July 10 at Winchester Register Office. It was the day after Vince’s 48th birthday. He had no hair and a massive dent in the side of his head but I loved him just the same, probably more. I felt we were meant to be together and things had fallen into place to make it happen.

Although Vince looked poorly and his right eye was partially closed, he felt OK for a while. Vince would say “I’m fine, we’re going to be fine” and was so positive I didn’t question him. His outlook barely faltered, I was in awe of his bravery and think I would have gone to pieces without it.

We had about a year before he started to suffer again. By April 2014, Vince was losing his hearing, he had a lump on the side of his head which was getting bigger. It got to the stage where it looked as though whatever was growing inside was going to burst through his skin. His right eye was gradually closing and I noticed his stomach had swollen. We begged for an MRI scan but were told the circumstances didn’t warrant it. A CT scan confirmed the tumour was back but we knew that – you could practically see it bursting through the skin on the side of his head, it was disgusting to look at and had already rendered him deaf in that ear.

Vince had a “routine” full body scan ahead of an operation to debulk the tumour. To our horror, it revealed that the cancer was now in his liver, lungs and spine. The neurosurgeon told us it was the first time in 40 years that he had seen a primary brain tumour metastasise to other areas. The cancer was everywhere. Even then Vince remained characteristically brave and would say: “Darling, don’t worry, it will be OK.”

We were in the middle of moving to Devon when we were given the terminal diagnosis in November. We had dreamed of moving since spending our honeymoon there and, despite everything, we went ahead and relocated to Beaworthy on 4 December.

Surgery was no longer an option. Vince went on a trial of chemotherapy tablets but had to give up after just five days. Despite all of this, Vince told the hospice nurses who came to help that he was really happy: “I have got Gwyneth and I am here. I have got everything I need.” Incredible to think how at the time he was bent over in agony, he could barely stand up and hardly walk.

Vince had grown close to my son Ollie who lived with us. They managed to get out one evening to look at the stars through a telescope. Vince went to bed and I was unable to wake him the next morning. He managed to say he loved me before slipping into an ever-deepening sleep. He was taken to the Royal Devon and Exeter Hospital by ambulance. Vince was deeply unconscious as I stayed at his bedside, holding his hand and talking to him the whole time. I felt as if he was hanging on so I told him: “It’s OK Vince, you can go” and five minutes later he passed away. I am so grateful that he had a chance to say goodbye to his family and it was a relief that he was finally at peace. We had been through so much in our three years and four months together and I was privileged to be at his side right at the end.

Vince’s ashes are placed in our garden along with a cherry tree which we chose together shortly before he died on 19 January 2015. He was 49. I feel that I owe it to Vince to raise awareness of this cruel disease. Initially Vince had been diagnosed with a “benign” or “non-aggressive” meningioma brain tumour. It was later re-classified as a grade 3 anaplastic astrocytoma. By the time he died, the cancer was extremely aggressive and had invaded his whole body. I want people to know that there is no such thing as a “benign” brain tumour and it is vital that more money is spent on research.

Who knows what might have happened if Vince’s tumour had been diagnosed earlier, if there were better treatments which might have given him more time and improved the quality of his last months? Brain tumours are indiscriminate and can affect anyone at any age. They kill more adults and children under the age of 40 than any other cancer yet just 1% of the national spend on cancer research has been allocated to this devastating disease.

Without money being invested in research none of this will ever happen and I hope that by speaking up and sharing his story I can help other people to understand that this is unacceptable. 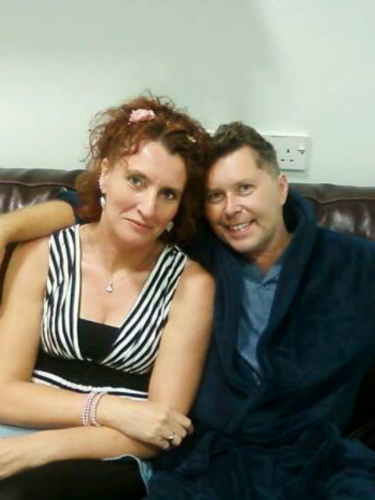