Valerie was a healthy, fit mother of four grown-up children, who enjoyed golf, gardening and walking her dog when she suddenly started to experience a range of symptoms.  Various doctors diagnosed stress and a trapped nerve, but two months later it was discovered that she had a grade IV glioblastoma multiforme.  Her daughter, Helen, was able to accept and come to terms with the fact that her mother was dying and help Valerie on her journey of letting go.

“My passion for personal development helped me to handle Mum’s diagnosis and accept that her life was going to come to an end very soon.  It also gave me the ability to support someone who was dying without always questioning whether I had done enough, or feeling guilty.  I totally believe that guilt doesn’t change anything – there is no benefit in feeling guilty about what we should or shouldn’t have done, both pre and post diagnosis.  It is guilt, along with other negative energies, such as anger and resentment, which make us feel out of control.”

Mum was a very fit, healthy, determined and feisty individual – she walked her dog, loved gardening and played golf three or four times a week being pretty competitive and successful.  She was passionate about her children (of which she had four, including me), as well as about having grandchildren – she was still alive to meet her first grandchild, Amelie – my daughter, but five more grandchildren have been born since she died whom she never got to meet.

Looking back, Mum struggled during the winter of 2010/2011 and was less active. She had complained before about arthritis getting into her joints as the winter went on, but in February 2011 I noticed that she had become more anxious and more aggressive – she had never been one to mince her words, but was now quite intolerant and frustrated at not feeling well.  For two months Mum was misdiagnosed with stress (doctors were aware that my sister was getting married in March) and she was also separately diagnosed with a trapped nerve in her neck, having been complaining of pins and needles in her fingers. The morning of the day that Mum was admitted to hospital she was diagnosed with a middle ear infection!

With Mum also by now experiencing a loss of balance, confusion and extreme fatigue and, frustratingly, never seeming to see the same GP twice with her range of symptoms, Mum paid to see a neurological specialist, but he referred closely to the notes which had been passed onto him from Mum’s surgery, as well as the tingling in her hands and confirmed the trapped nerve diagnosis. He didn’t check her eyes, which would have revealed all!

I started to wonder whether Mum might be in the late stages of dementia – her confusion, fatigue, inability to concentrate - and I mentioned this to Mum’s GP, but no further action was taken.  Mum was frustrated (as was I at this point) as she didn’t feel she was being listened to and she knew she really wasn’t very well.  I spoke to a neighbour who was very close to Mum about the possibility of us staging something which would mean calling for an ambulance and getting Mum taken to hospital where she might then be given a scan.  Coincidentally, before we could put anything into action, my sister got in touch to say she was with Mum and she had just displayed stroke symptoms.  Mum was immediately taken to hospital in an ambulance and a scan revealed the brain tumour.

A biopsy delivered the news that Mum had a grade IV glioblastoma multiforme located on the border of the parietal lobe, which plays a role in the control of emotion and coordination.  It affected the balance and coordination of her left side and often she didn’t even seem to know that her left side existed. Fortunately when they did the biopsy they also did a bulk removal, which means they removed as much of the tumour as they could.  Without this Mum wouldn’t even have lasted two months.  In fact she lived for six months to the day.

It was obviously an incredible shock that we were going to lose Mum so very soon and my immediate thought was that she wouldn’t get to see her grand-daughter grow up – something I know that was very precious to Mum.

Mum’s medication throughout was very challenging – she was given codeine for pain relief which, through prolonged use, resulted in a blocked colon and a week in hospital. It didn’t help her psychological mind-set, or the family and was very hard to handle, as was the change in Mum’s personality, which was very dramatic.  She was not the woman she used to be yet occasionally we still saw little sparks of her true self.  This had a massive impact on me and was more difficult to cope with than if she had just changed beyond all recognition.

One of my sisters and I cared for for Mum at home, but towards the end of August, Mum went into a hospice where she died a month later on the 20th of September.  I was away on holiday then and as I left I knew I wouldn’t see Mum again, but Mum wanted me to go.  Just before I left she said: “My life is over now, go and live your life”.  Ten days before she died the doctors were planning to have Mum moved to a care home saying that she wasn’t ill enough to be in a hospice.  Such is the nature of this type of condition! Mum would never let on how ill she was really feeling, but there came a point in time where she couldn’t do anything about it.  The tumour had taken over. Throughout her illness though Mum was amazingly compassionate about others, as well as the nurses who she saw as being very badly treated, even though she was the one who was dying! She was a great inspiration to me.

When Mum died I was able to handle it well.  When my grandmother had died some 17 years ago it took me five years to come to terms with it, but since then I have worked an awful lot on my own development, engaging what I refer to as our Spiritual-Logic, which is about our higher levels of functioning.  It helped me to handle Mum’s diagnosis and accept that her life was going to come to an end very soon.  It also gave me the ability to support someone who was dying without always questioning whether I had done enough, or feeling guilty.  I totally believe that guilt doesn’t change anything – there is no benefit in feeling guilty about what we should or shouldn’t have done, both pre and post diagnosis.  It is guilt, along with other negative energies, such as anger and resentment, which make us feel out of control.

My acceptance of Mum’s forthcoming death helped me to be able to talk to her about her end of life care and her Will in a way that many other people would find quite traumatic. I knew that decisions had to be made and was able to accept it.  It also helped me to help my mother in her struggle to let go and accept her death - to be patient with Mum under the most stressful of situations.  Mum thought that our journey together over her last few months would make a good story and she asked me to write a book about it.

The book, entitled Dying to Live, is about our experiences on that journey of acceptance to encourage people to handle death more positively and to tap into their higher level of functioning, which comes from engaging through our heart (including love and compassion, forgiveness and inner peace and joy) rather than the negative energies of fear, anger and resentment, which make us feel out of control and threatened.  I have also written a companion book of reflections and poetry called You Are Not Gone to help with the loss and bereavement.

Most of us are never taught how to handle death, yet there is nothing we can do about it. We have to accept that death is inevitable and we need to be able to let go of the person we love, particularly if that person is ill.  We also need to help that person to let go too. The book Dying to Live is about our journey together, preparing for Mum to die with joy and grace, as well as about me being able to celebrate her life, rather than sitting for years in mourning and grief.

Positive energies feel good – it is why people like Nelson Mandela and Mother Teresa have had such a positive impact on so many people.  On the other hand, anything we can’t handle generally brings fear, which is very relevant when having to manage death.  If I was diagnosed tomorrow with a life-threatening illness, I am not going to lie that I wouldn’t experience fear, but I would be able to tap into my higher self and through acceptance would become present with the reality.

Equally, I could also be very angry about the Doctor’s misdiagnosis of Mum’s condition, but that doesn’t achieve anything.  What I want to focus on is how we can help move things forward for a more effective diagnosis in the future and, of course, find better treatments for patients with brain tumours and, ultimately, a cure.

My biggest passion, however, is personal development, because it makes a difference to how we live our lives and the impact we have on others. We need to wake up from our old, conditioned patterns of responding, including ways of handling death and dying, so that we can enjoy life so much more and get the best out of ourselves, and that also involves knowing how to handle our emotions.

I am delighted to be able to share a poem with you that I wrote and read at Mum’s cremation service. It sums up the fact that at one level we never really die. We continue through all the people we have touched along the way.

You Are Not Gone

The lessons you taught I will pass on,
I see you in every one.
In the sun and in the rain,
You and me, we are the same.

In the thoughts I know we share,
In the way we show we care.
You are not here for me to see,
You are there and now set free.

You are not gone, you are in us,
You would not want any fuss.
So we smile and toast to you,
And know you are in all that we do. 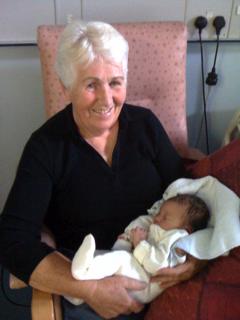