Trudy was a 35 year old forensic psychologist, a wife and mother of three year old Phoenix. On 22nd October 2010, Trudy was officially diagnosed as having a Glioma tumour (specifically, an Anaplastic PXA grade IV).  Less than four months later she passed away.
In the summer of 2010, our two beautiful daughters, Trudy and Evette, took their children on holiday together with their husbands to a villa in Spain.  Looking back on the holiday, Evette could see that Trudy wasn’t picking up on things as she normally would and was rather snappy, but she put this down to the heat.

Back in England, Trudy started to feel nauseous and suffer with headaches.  She went to the GP, who diagnosed an inner ear infection, which we thought was a little bizarre.  She was later referred to a specialist and blood tests were performed (which didn’t indicate anything untoward – unlike other cancers, brain tumours can go undetected initially).

On the day she was due to get her results I phoned Trudy to ask her how she had got on, but she didn’t know.  This was totally contrary to her personality.  I was even more concerned when Trudy mixed up the time she needed to pick up her son, Phoenix; so I decided to go straight over.

When my wife and I arrived at Trudy’s house we realised something was very wrong.

She looked dreadfully grey and was very confused. We took her to A&E, which was the catalyst for a snowball of events.  Suddenly we were facing the agonising reality that they had found two tumours and needed to operate straight away.  My wife, Sue, and Trudy’s husband, Lea, never left her side throughout her illness.

Ten days after the surgery, Trudy was poorly again and had to undergo another operation.

About 2 weeks later, Trudy was taken back into hospital and given hours to live.  We were all distraught.  She was given manitol and miraculously pulled through – a nurse told us she had never seen anyone respond like she did to the drug.  This gave us hope.

Trudy’s condition started to improve slightly, as a result of which she started a course of chemotherapy. She was discharged from hospital after three weeks on the chemo regime.  We had Trudy home for Christmas which was lovely.

After Christmas we went to see Trudy’s oncologist who gave us the devastating news that the chemo hadn’t worked.

On 6th February 2011, Trudy died. It was a very savage and very quick end to a wonderful life.

A friend of my son’s quotes the proverb: “A star that shines twice as bright burns half as long” about Trudy.  It certainly seems very poignant in her case.  She was beautiful and intelligent, with a glittering career as a forensic psychologist. Having missed at least a year of school through back problems, Trudy was determined to go to college where she sat BTECHs and A Levels, followed by a degree in Psychology and an MSc at Coventry University.  On top of these marvellous qualifications, Trudy was a beauty queen too and “the apple of her dad’s eye”.

We want to put something back so that other people don’t have to suffer like Trudy did and, as a result, the whole of her family.  Brain tumours are so savage.  If it had been any other cancer at least we could have talked to Trudy, but the brain tumour took her ability to communicate.

We are a strong family and we are pulling together and supporting Lea, Phoenix and each other. Trudy will always be with us.  We want to do all we can to help find a cure. 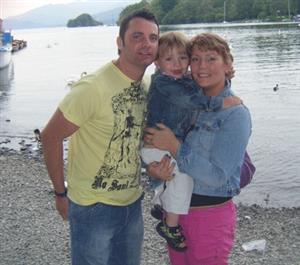