Writer and illustrator Tom Lubbock was chief art critic of the Independent until his death in 2011. Married to artist Marion Coutts and with a son Eugene, Tom lost his life to an aggressive brain tumour aged 53, just over two years after diagnosis. Tom’s book Until Further Notice I am Alive, (Granta, 2012) is a lucid and compelling description of that experience from the inside. After his death Marion went on to publish her acclaimed memoir, The Iceberg. (Atlantic Books, 2014).

In 2008 Tom had a fit while we were staying with friends in Suffolk. At first his doctors thought he might have suffered a stroke, but an MRI scan showed a tumour in the left temporal lobe of his brain – the area responsible for speech and language. There had been no previous symptoms to alert us.

An operation to remove the tumour revealed it was malignant, fast growing and incurable, a grade-four glioblastoma multiforme. Because of its location, we were told that Tom’s ability to read, write or speak could likely be impaired. Being able to communicate well was of upmost importance to him, his use of language was always deft, focused and pointed. As he said, “The getting of things exactly right with words, refined and compacted, is my job of many years standing. It is my pride.”

Yet Tom continued to work. His writing for the Independent kept going until late September 2010. An extended article, When Words Failed Me, appeared in The Observer in November that year. Considering the progress of the disease and the complex, exhausting implications of the treatment, it was incredible that he continued to write, let alone write well. Readers of his column could not have known how ill he was.

Sometime in late 2009 I started to write myself: short paragraphs, late at night. It was a way of externalizing the many things that were being given to us to see and do. Writing gave me an area over which to have control. This work grew into a book. The Iceberg isn’t simply a book about death; it is about life and life going on. Tom called it an adventure of being and dying.

Eugene was just learning to talk as Tom’s language started to fail him. He was eighteen months old. Tom had two surgeries, three rounds of chemotherapy and one blast of radiotherapy. None of these remotely promised a cure but bought us much-needed time. As Tom noted, “Something in my head is hurrying to kill me.” All his treatment was on the NHS and for this we remain profoundly grateful. His care, on the whole was amazing, but it was immediately clear to us that treatment options for glioblastoma are shockingly limited. Tumours that originate in the brain have different attributes from cancers elsewhere. Much more needs to be known about them, what causes them, how they develop and how specifically to tackle them.

Tom died on 9th of January 2011 at Trinity Hospice. Obituaries were published in The Independent and The Guardian. 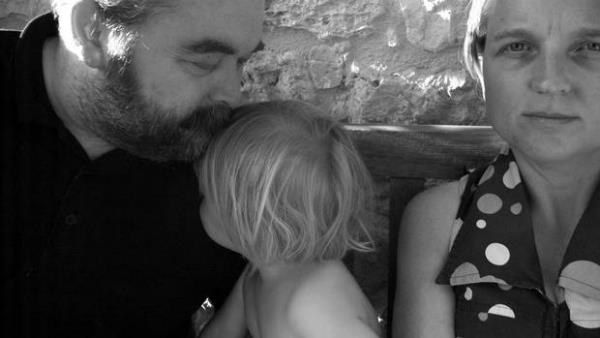