Tim Johnson was a fit and healthy personal trainer when he started experiencing balance issues in July 2020. A scan revealed the 42-year-old had a grade 4 glioblastoma and doctors said it was so aggressive, no treatment would prolong or improve his life. Seven weeks later Tim died, leaving behind his four-year-old daughter Alexa.

Tim and I separated after Alexa was born, but we remained very close, best friends really. In April 2020 I was struggling during the lockdown to work from home and look after Alexa. Tim, being a personal trainer, couldn’t work much at the time so he moved from Godalming in Surrey to Bournemouth to live with us.

He adored Alexa, she was his whole world. He went back home in June, but after spending so much time with her during lockdown, he decided to move closer to us permanently. He put his flat on the market and put an offer on a property in Southbourne. We were all so excited for him to be around more. 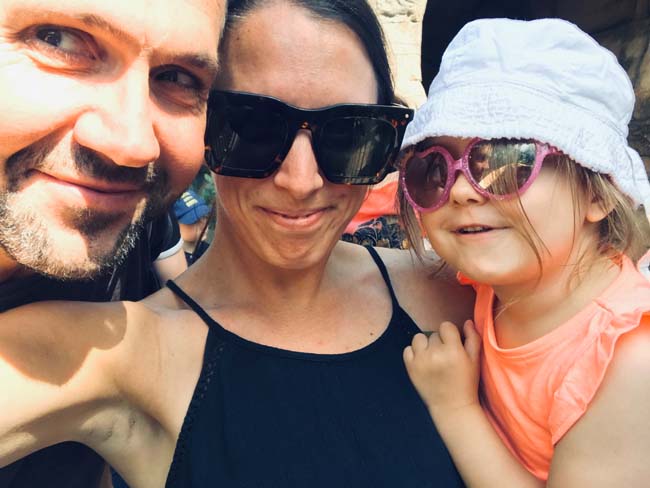 But within weeks, he started having balance issues. He was struggling to do the exercises he was asking his clients to do. He was 42, fit, vegan and didn’t really drink.

“He was the absolute picture of health, so at first we passed it off and didn’t think much about it. Then he started falling over.”

Tim went to his GP who referred him to the Royal Surrey County Hospital for a CT scan. That came back showing an abnormality, so he had an MRI the following day. After that scan they came back immediately and said “it’s brain cancer”. We were both so shocked. We had expected the MRI to lead to further tests and things, but this was absolute and sudden. 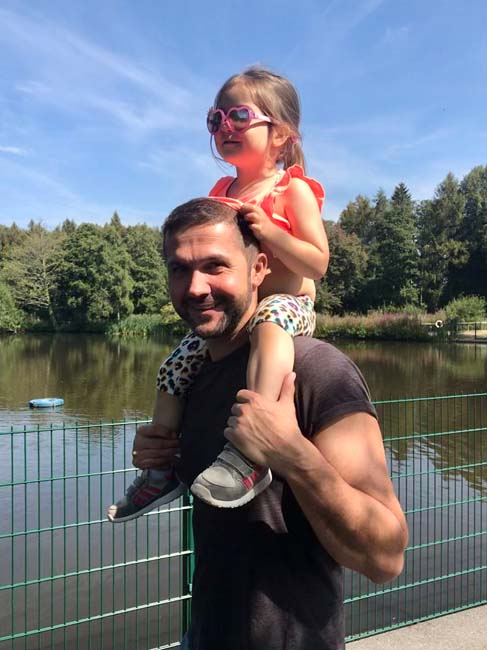 We wanted to be hopeful about it, but every bit of news we got was worse than the last. After further investigation he was diagnosed with a grade 4 Glioblastoma (GBM). Then we were told it was inoperable because of the location of the tumour.

“It felt like there was no glimmer of hope, just bad news on top of bad news.”

They wanted to do a biopsy and start treatment, but Tim declined. His whole ethos in life was about natural, clean living and he wanted to look at organic treatment options. I didn’t fully agree with him, but those were his wishes. His family and I kept urging him to accept treatment, and after a couple of weeks he came around to having chemotherapy. But by then the doctors said it was so aggressive it would not be worth it. They said there was nothing more they could do for him.

It moved so fast. When we first found out, we had assumed we would still have time as a family. But he came down to visit a few days after being diagnosed and was already deteriorating. He couldn’t pick Alexa up anymore, and she couldn’t understand why. 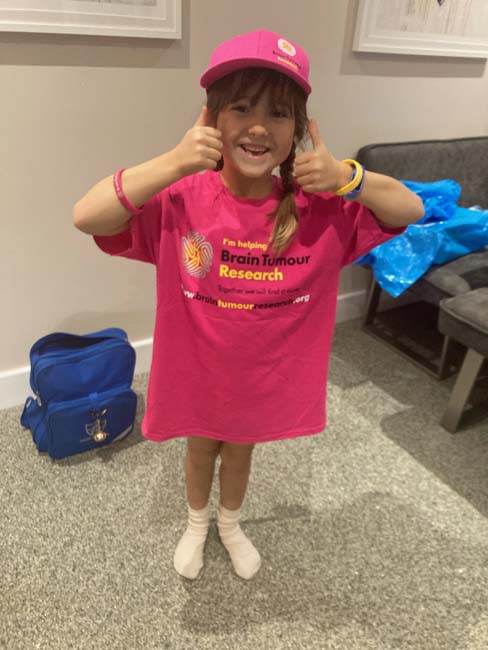 A few days later he collapsed and was in taken back to hospital, where he stayed for a couple of weeks. He wanted to go home, but his balance issues became mobility issues; he couldn’t climb the stairs or even sit up on his own. A few weeks later he was almost completely paralysed, other than some small movement in his right arm which allowed him to point.

He moved in with his mum in Surrey. He lost the ability to speak, and that progressed to being unable to chew or swallow. He was getting so frustrated. We got him some cards with things like “I love you” on so he and Alexa could communicate a bit. It was heartbreaking seeing them together.

“Every time Alexa came into the room Tim seemed to come apart. He struggled coming to terms with not being around for her in the future. That was the hardest thing. He was breaking”

We got a big piece of card with letters on for him to point and spell out words. I’d sit there all day with him, talking slowly via this makeshift keyboard. He was able to say the things he needed to and left a message for Alexa.

“It read: ‘You can do anything you want to do. You are amazing. Be kind, be happy and be yourself. Love Daddy’.”

We turned one of his t-shirts into a remembrance bear, and had that message embroidered onto it. Alexa still cuddles it when she is missing him.

The last time he saw Alexa, it was a perfect day. We all went outside with him; me and Alexa, his mum and sister and the nurses. Alexa loves dancing and she did this little routine for him. You could make out the smile on his face, he was really happy. But he kept deteriorating, and we agreed that would be the last time Alexa should see him. 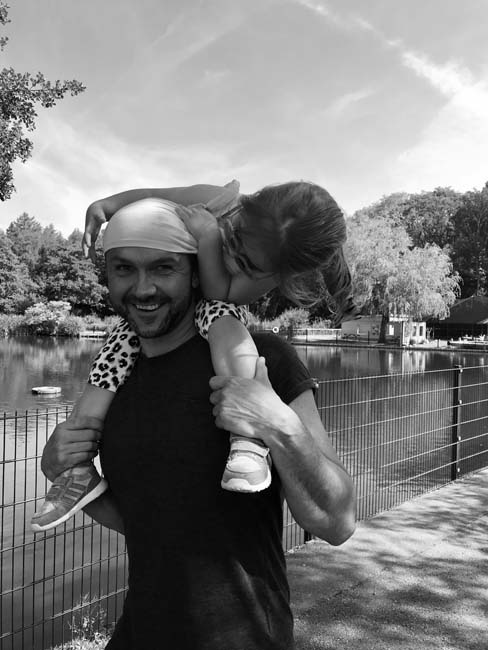 I saw him a few days later, but he was on morphine and wasn’t really with it anymore. He died the following Monday, on 14 September.

Alexa is six now and she remembers a lot of him. We made a picture book of family memories that we look through together.

I find her inspirational in how she deals with it, because she does get upset. She’s in school now and she sees the other children who have a mummy and a daddy. It’s unusual to only have one living parent at her age, and she knows how unlucky we’ve been to lose him. But she’s so strong and I get a lot of my strength from her.

“I don’t think we’ll ever properly process losing Tim. To see somebody so strong decline that quickly is nothing like I ever thought I’d experience.”

On Sunday 23 April, 2023, I am running the TCS London Marathon for Brain Tumour Research.

I didn’t realise how many people die from this cancer at such a young age and I want to do something to help. 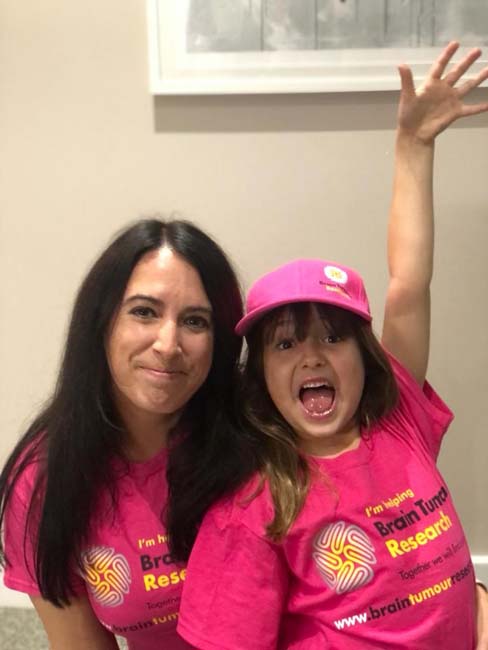 Tim and I ran the marathon in 2012, before we knew each other. Our times were three minutes apart, so we were probably running side by side at some point, or certainly very close.

“Alexa and I often look up to the stars and say ‘Daddy is up there, let’s make him proud every day, because that’s how we keep him with us’.”

I told Alexa I was doing the marathon, and her reaction was “Oh Mummy I don’t think you should, you’ll be too slow to win”, which really made me laugh.

I had to explain that I didn’t need to win it, just take part, but she’s very competitive and a bit of a perfectionist. 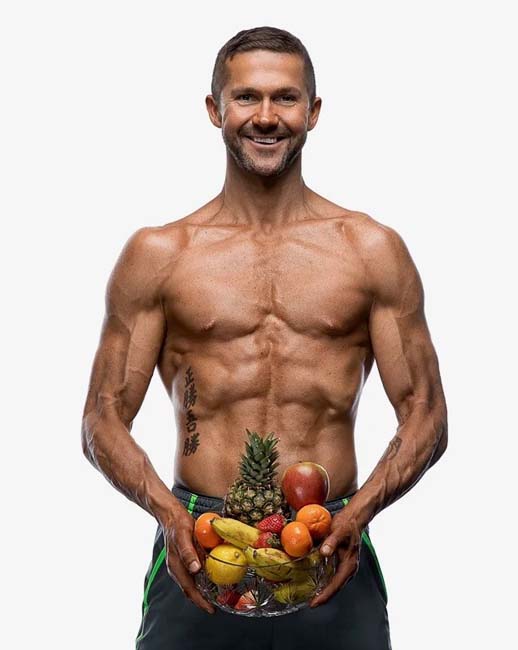