Sue Mcloughlin, a loving mother-of-two, grandmother-of-five and great grandmother-of-two, found out she had a brain tumour on 25 September 2020, one day after celebrating her 67th birthday. She had experienced no symptoms before her speech began to slur, which made her family suspect she had suffered a stroke. She was formally diagnosed with a glioblastoma multiforme (GBM) in December 2020 and underwent a biopsy and debulking operation which rendered her paralysed down her left side. She went on to have radiotherapy and chemotherapy, although her chemo had to be abandoned because of problems with her platelet count. She died on 12 September 2021, just days after her 49th wedding anniversary.

Here is Sue’s story, as told by her daughter Julie…

When Mum got sick it was a real shock because she was the one who paid all the bills and generally took care of everything and everyone. My dad, who goes by the name of Greg, has chronic obstructive pulmonary disease (COPD) so is on 24-hour oxygen and Mum was his carer. That, of course, made things more complicated but we treated everything as a family affair and worked together to get through it. I’m kitchen manager of a pub in East Sussex and was furloughed at the time so I moved up north, to their home in Accrington, Lancashire, to help out. I couldn’t have done it without my brother, he couldn’t have done it without me and neither of us could have done it without Dad.

“We had to make a lot of adjustments and very quickly.”

Mum turned 67 on 24 September 2020. I spoke to her the next morning and noticed that she was slurring her words. I even jokingly asked if she’d had a glass of wine with her cereal that morning as it was her birthday the day before, but her sister-in-law is a nurse and thought she may have had a small stroke, so Mum went to the Royal Blackburn Hospital to get checked out. It was the start of COVID-19 so Dad wasn’t able to be there with her for her scan, or for when she found out she had some kind of brain tumour. She was told there was a chance the cancer could be found somewhere else in her body so she was given a mammogram to see if that was the case, but it came back negative.

On 27 November 2020 Mum went to the Royal Preston Hospital to have a biopsy, with the results the following month revealing she had three tumours of differing sizes, all glioblastoma multiforme (GBM). She also had a debulking surgery, which left her paralysed down her left side, with only partial mobility in her left leg, hand and arm. After that all our lives changed.

We had to make a lot of alterations to the home and pretty quickly. Ten days before Christmas we were told Mum could come home but we needed to have a stair lift installed. We got it done but it was a lot to organise in a short space of time and was life-changing in so many ways. I had to help her get ready, get dressed, and take her to chemotherapy and radiotherapy appointments at the Rosemere Cancer Foundation in Preston. With the travel time, the need to be ready ahead of her appointment and the treatment itself, we were often gone for between five and eight hours. Thankfully, every Tuesday my brother, Ian, would come by to give me the day off and take Mum for her treatment. He would also come over on Sundays to help with jobs around the house and so that we could all have dinner as a family. 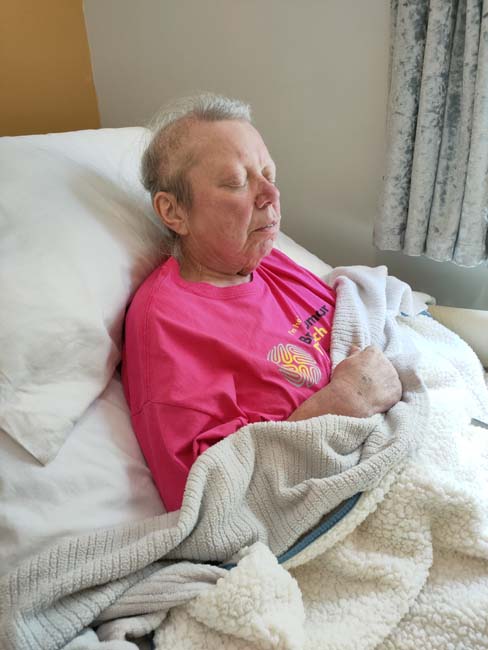 In the two months between getting ill and going for her operation, Mum was sewing masks to help protect the community from COVID-19. She had worked in the banking and finance industry but was also a seamstress so when she retired, as well as volunteering at the Saints & Lady’s charity shop in Great Harwood, she bought a lady’s cottage shed and moved her sewing machine and materials into there. She installed electricity and turned it into her sewing room. Unfortunately, she didn’t have it for long before she became unwell and stopped being able to go out there.

“It’s actually a bit demoralising to know that she was finally able to retire and then everything went wrong.” 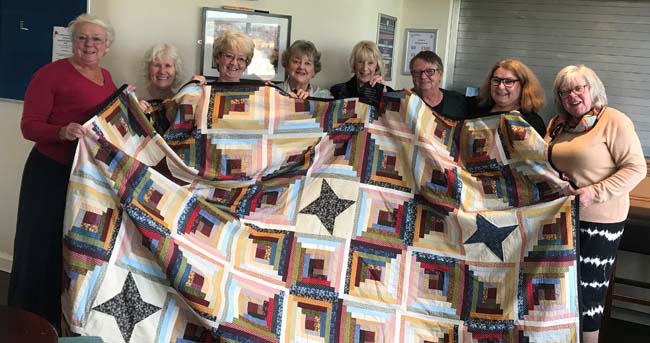 Accessibility was a big problem. Not many people think about how they’d get in and out of their house if they couldn’t walk properly but if it’s something that happens overnight, like with us, it’s a big learning curve. We were lucky Mum had saved a bit of money which we were able to use to buy what she needed, the bed and the chair for example, but I don’t know what we would have done otherwise. 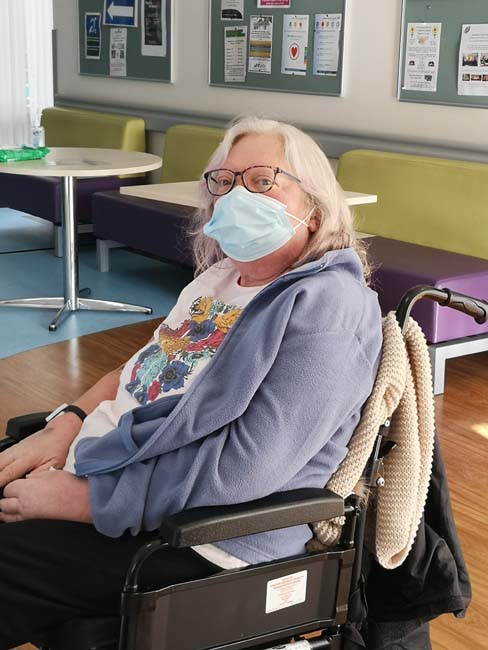 “After having five platelet transfusions, Mum had to stop the chemo because she was told it was causing her platelets to drop out.”

That was pretty scary but even when all she had left was the radiotherapy, she never gave up. She continued to fight and do what she had to. I think she only missed one treatment day and that’s because she woke up and just couldn’t move her feet – it was almost like she was stuck to the floor. We were told to ‘give her an extra steroid and see what happens’, and it did the trick. It turned out the tumour had swollen and was pushing on the mobility side of her brain so, as much as she wanted to move, she wasn’t able to because the signal wasn’t getting through. 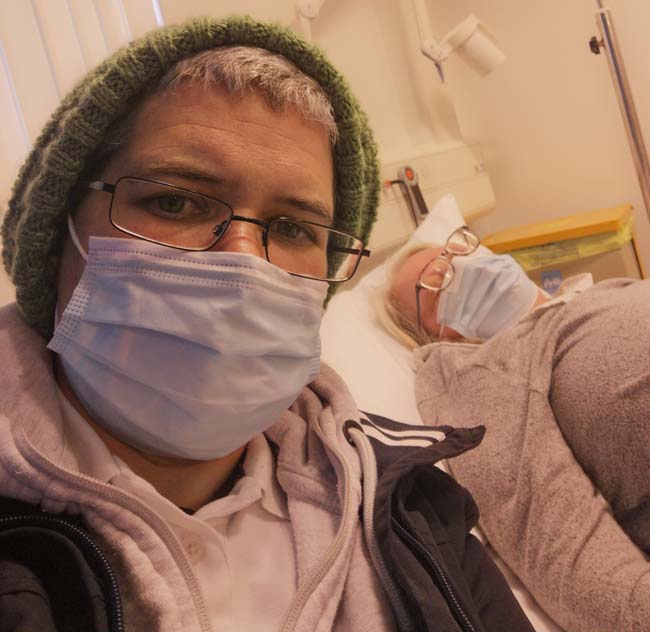 “She also suffered with something called rosacea which caused her cheeks to go red and swell and made it difficult to put the radiotherapy mask on her.”

The tumour was playing with her emotions and making it worse so I kept plums in the fridge so she could put them on her face, cold, and roll them over her cheeks to make the swelling go down before leaving for radiotherapy. It worked and we had quite a laugh about it at the time. Her motto from day one was ‘we’ve got this, we’ll face each day together as a family and combat it together’. 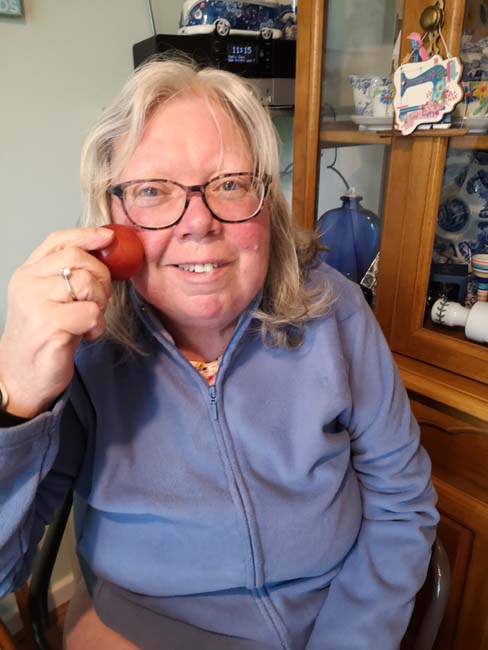 “Mum had such a strong will to keep going and one of the things that kept us going was talking about the things she loved; music, gardening, the family.”

Every time we got into an ambulance, she’d tell the crew that she’d been to see the Rolling Stones and Tina Turner. My brother and I had heard the stories before but she would recall this one of Tina Turner saying ‘I’ve got a surprise for everyone’ followed all of a sudden by Lionel Richie coming out singing ‘hello, is it me you’re looking for?’ That memory obviously meant the world to her and I’m glad I was there to hear her retell it again and again. 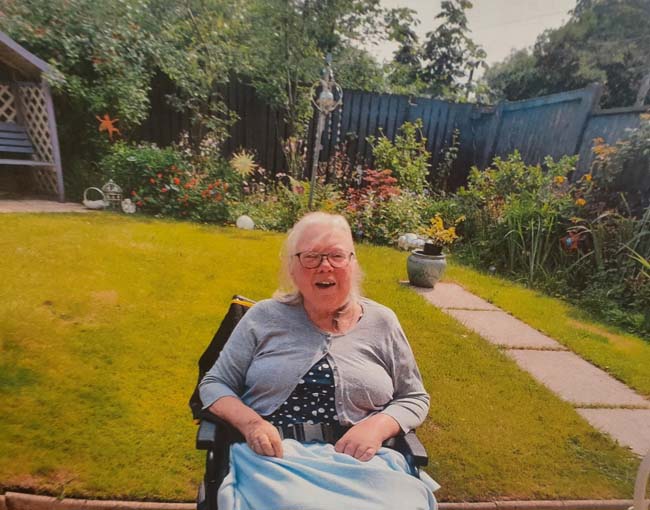 “She passed away on 12 September 2021, three days after her 49th wedding anniversary.”

It’s still shocking how fast it all happened; she had no symptoms, no headaches, nothing, until the slurring on the day she was diagnosed, and just 49 weeks later she was no longer with us. We had a celebration of life ceremony and everything was arranged just as she wanted, with lots of sunflowers and butterfly decorations. We also had sunflower crochet badges and patchwork hankies made by Mum’s sewing friends. 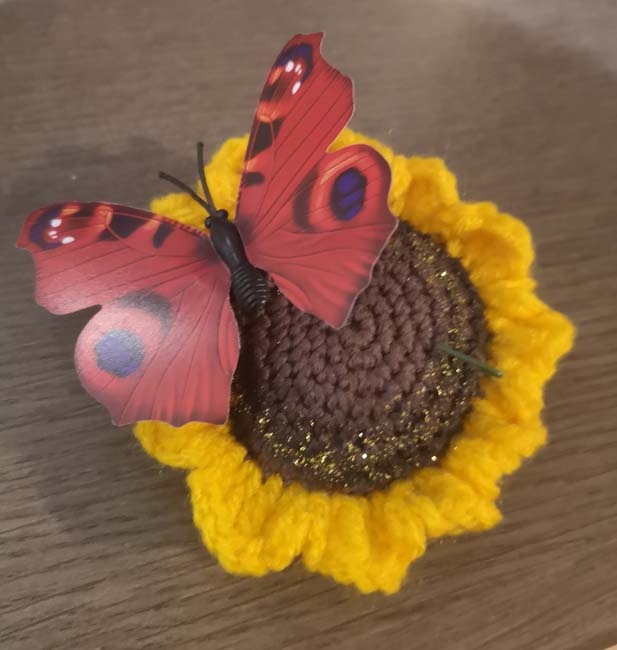 For her service at Accrington Crematorium we had four pages of music, which included the Butterflies theme tune, Teardrops by Womack & Womack and Abba’s Dancing Queen, which was picked by the grandkids for her to go out to and suited Mum perfectly because she was the life and soul of any party. At the celebration of life we had about 100 friends and family but when we went to the chapel of rest at the crematorium we couldn’t get everyone seated because there were so many mourners. It felt like that was a massive reflection of her and the life she’d led. 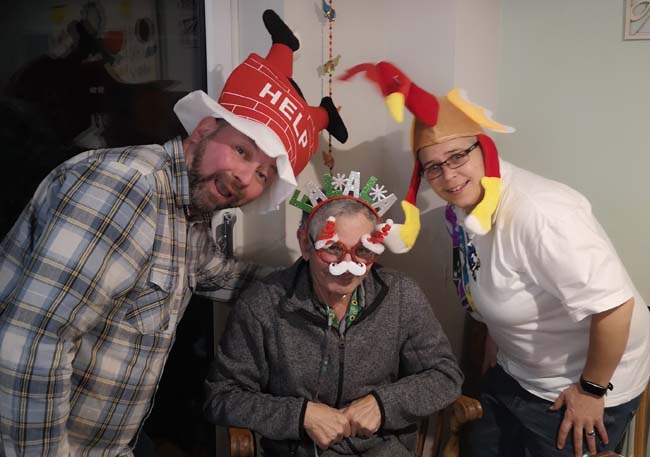 Mum supported Brain Tumour Research and raised £1,240 after she died by requesting any donations made at her service to be given to the charity. As a family we support it too. Her youngest sister, Paula, is currently doing the 100 Star Jumps a Day in November challenge, I did the 10,000 steps a day in February whilst still taking Mum to treatment and next month I’ll be hosting Wear a Christmas Hat Day at the pub I work at. Mum would want people to be aware of brain tumours, not just what they are and how they can be treated but how families are affected by them because, until you’re thrust into that world, there’s no way of truly understanding it.

“I can honestly say that I haven’t begun to deal with losing her yet but I hope to be able to help prevent other families from experiencing the same pain.” 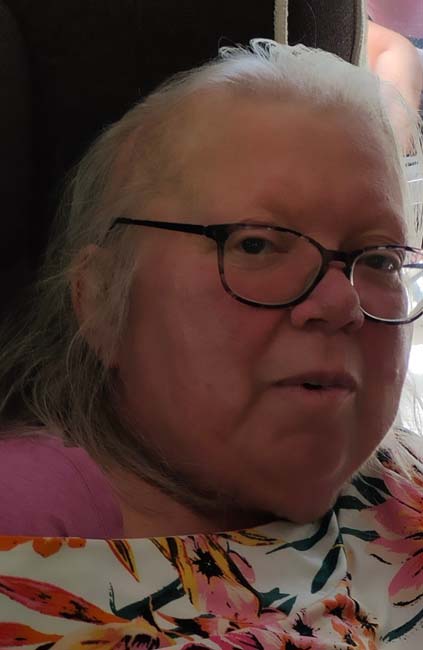