Sue’s career took her from shorthand typist to HR director. She found her soul-mate in Mark who also loved the great outdoors and together they had a wonderful son, but Sue was diagnosed with an aggressive brain tumour which killed her just 15 months later aged 55. Six months after Sue’s diagnosis, Mark was diagnosed with blood cancer.

Sue and I were married for 30 years, celebrating our pearl wedding just three weeks before she passed away. We met at an event back in 1986 whilst both in the Territorial Army, although in different regiments – Sue in the medical corps and me in the cavalry. We both loved the great outdoors, whether that was canoeing, cycling, walking or skiing and during the summer we would go to our caravan in North Wales every other weekend.

Sue and I had our honeymoon in the Yorkshire Dales and we used to return there at least once a year. There isn’t a footpath in the Dales we haven’t walked. Our son Sam would often come with us, even though he is now 27. 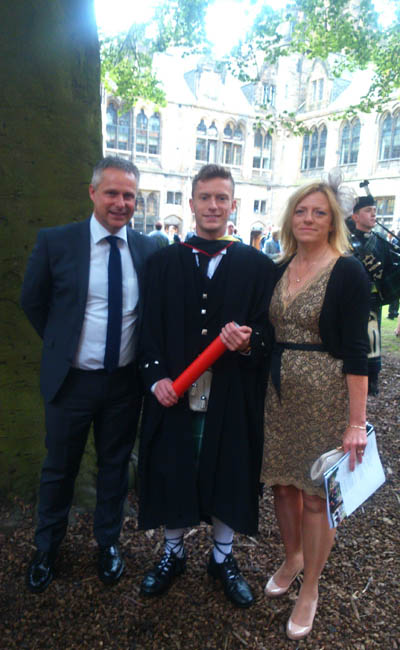 Sue was very proud of Sam, as am I. He graduated from the University of Glasgow with a BSc in Geography and an MSc in Flood Management. He was captain of the athletics team of Scotland’s Universities and indoor and outdoor 800-metre champion. We may have been a small family, but we were very close.

Sue loved animals and in particular our two rescue cats, Barney and Poppy. Barney was cruelly abandoned and left in a cardboard box, fortunately outside a cat rescue centre in Wolverhampton. Barney was very much Sue’s cat, he adored her, particularly after his cruel start to life. For weeks after Sue passed away, he pined and waited for her and only now is beginning to adjust to life without her.

“Sue crammed a lot into her 55 years and I know she didn’t have any regrets.”

She started off her working life as a shorthand typist, aged just 16, but her career path took her to the heights of HR director twice over: once in the public sector with Wolverhampton City Council and the other in the private sector with the French multinational corporation Saint-Gobain. 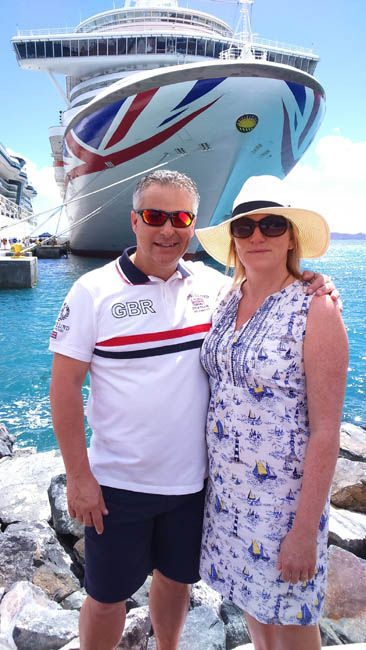 In March 2019, Sue started talking gibberish. She wouldn’t finish sentences as she would forget what she was going to say. At first it was funny. We left it a week or so because we thought she had a virus.

Then Jackie, one of her work friends and colleague, became worried she shouldn’t be doing her 85-mile round trip driving on the M6 every day to and from work and offered to give her a lift. Not long afterwards, Jackie became even more concerned and drove her from work in Coventry all the way to A&E at our local hospital, New Cross in Wolverhampton, where Sue’s sister Dawn works.

It was suspected that Sue had suffered a mini-stroke, but then a scan indicated a possible tumour. Sue was transferred to the Queen Elizabeth Hospital in Birmingham. We were told she had a tumour the size of a plum stone, which was obviously a shock, but we were reassured when told its location meant it would be straight forward to access during surgery.

Less than a week later, Sue underwent a craniotomy. We hoped the tumour would turn out to be low-grade, but it was not to be. We were told the worst-case scenario would be a grade four glioblastoma multiforme (GBM) and post-surgery, which completely removed the tumour, the surgeon confirmed the biopsy result as being just that.  This was an unbelievable outcome, a real life-changing moment I will never forget.

“We were advised not to Google as there is so much inaccurate stuff on the web but eventually, I did and I was devastated to learn that the survival prognosis for a GBM was so poor, averaging just 14 months from diagnosis for 85% of patients.”

Sue underwent chemotherapy and radiotherapy to give her more time and no one could have fought the battle harder.  Sue was absolutely determined this would not define her; she wasn’t a willing victim of this cruellest of diagnoses. But despite Sue’s determination, the tumour returned with a vengeance just ten months later. In the meantime, just six months after Sue’s diagnosis, I was diagnosed with myeloma, a blood cancer attacking spinal areas, hip bone and lower ribs.

“I felt enormous guilt because on the one hand Sue was being told there would be no more hospital appointments and that palliative care was being organised, and on the other my chemotherapy treatment was going very well with my blood count also going in the right direction.”

It meant that while Sue was deteriorating, I had good news to share, which was a very mixed blessing indeed. 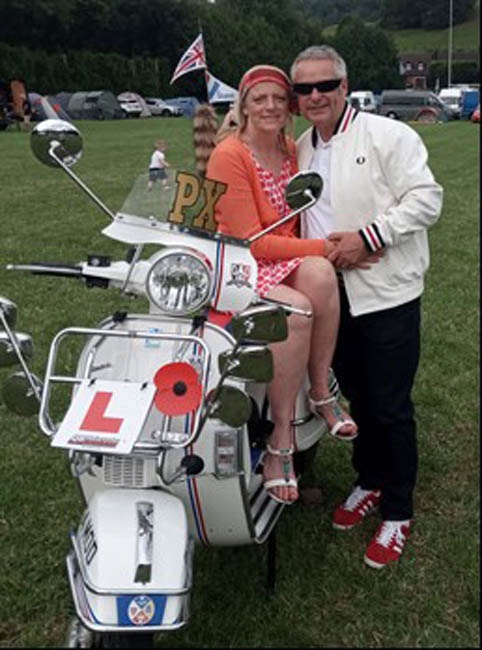 At first, Sue was able to use our en suite bathroom with assistance, but as the tumour effects became worse, she lost all feeling and control of her right side and became a deadweight to assist with mobility. With me having issues with my spine brought about by the myeloma, I was unable to lift her and had to wash her in bed. Eventually I managed to persuade her to have carers twice a day, which later went up to four times a day. The local palliative care team also arranged the loan of a hospital bed with an air mattress to prevent the danger of bed sores. It was installed downstairs in the lounge overlooking the garden, Sue’s pride and joy.

Sue had amazing care from the palliative care team and district nurses. They looked after washing and moisturising Sue, changing her and keeping bedsores away.  No one could fail to be inspired by their dedication to end-of-life care.

“I had no idea how the progression of Sue’s tumour would completely take her over – no one seems to warn you about what to expect.”

It was like looking after someone with dementia who couldn’t communicate properly. Sue would say things like: ‘take that naughty flower away’ when she meant quilt cover, or would refuse to take her steroids until tomorrow, but five minutes later, when you asked her again, would be completely happy to take them.

With Sue dying, our son Sam returned home in April. We were in lockdown because of the coronavirus pandemic and, although he lived in Sussex, he could just as well work from our home in Dudley.

Obviously having myeloma myself, and being on chemotherapy, I was deemed to be vulnerable and should have been shielding, but with Sue deteriorating so rapidly and nearing the end of her life, I could not refuse Sue’s family from wanting to spend precious time with her and I would not have wanted to deny her family either. We have all known each other for over 30 years and we are a small, but close family.  Only after Sue passed away, was I able to start shielding as I should have been.

During the last four weeks, Sue couldn’t talk at all, but I could tell she was listening and she would squeeze my hand to reply. Eventually she closed her eyes.

“I remember thinking that at least I still had Sue for another day.”

But when she finally passed away in the early hours of 13th July, I felt it was a blessing for her, even though she wasn’t in pain. I like to think she didn’t really know what was happening to her and that she was living in a bubble in her own little world. 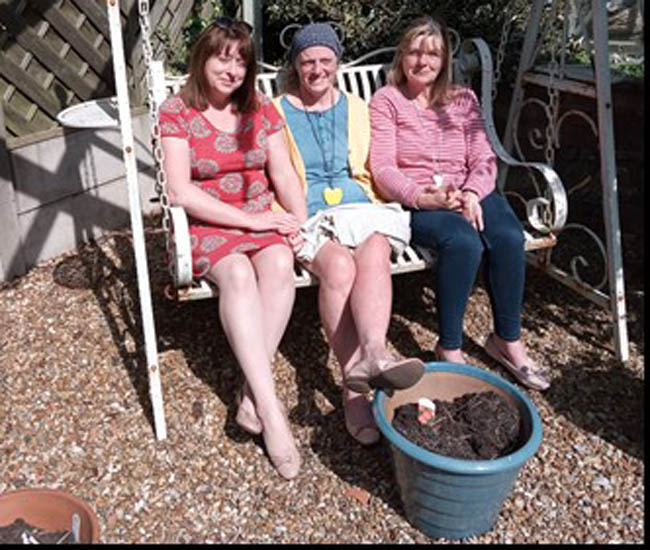 Our whole family was shocked to learn the grim brain tumour statistics. Last year, my sister, Kerry, put on a Do Lunch! event for Brain Tumour Research, raising more than £1,000, and there were funeral donations from family, friends and Sue’s work colleagues totalling more than £1,000. In late September Sue’s youngest sister Dawn organised a Walk of Hope to raise further funds for Brain Tumour Research in Sue’s memory.

Because of the coronavirus pandemic and Sue’s funeral having to be limited to just 30 people, I am hoping to be able to organise another Walk of Hope in 2021 post-lockdown for people who were unable to come. All being well, I will have had a stem cell transplant by then as part of my cancer treatment and then a few months of isolation to help boost my immunity, although I probably won’t be up to joining in the walk myself.

“As a family, we really want to be able to sponsor a day of research in Sue’s memory and know that her loss hasn’t been in vain.” 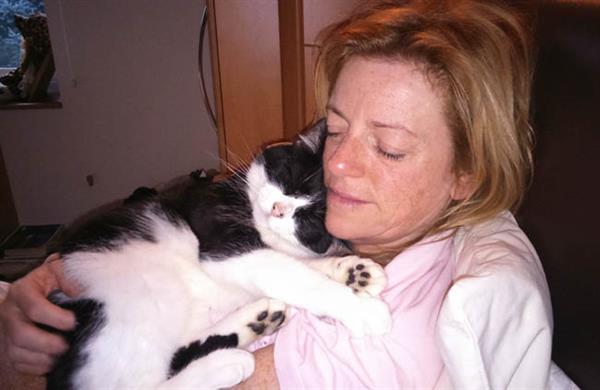