Stuart's story was written while he was still with us. Sadly Stuart passed away in December 2018. We will update his story fully at a more suitable time. Our deepest condolences go out to his family at this very sad time.

Father-of-two Stuart was diagnosed with an aggressive brain tumour at the age of 37. He has undergone surgery, radiotherapy and chemotherapy but his condition has deteriorated leaving him with mobility problems, trouble with his memory and personality changes.

“It is so hard for the girls too and we have been open with them about their dad’s diagnosis and treatment all along. When we get back from a hospital appointment we sit round the table, look at the scans and discuss what’s happening. While we know things are going to get worse and we have to be realistic, we are also hopeful that, as he is young and otherwise healthy, Stuart will beat the odds.”

Here is Stuart’s story, as told by his wife Debbie …

I was just 17 when Stuart and I met. We were working as shelf-stackers in Woolworth’s in Fareham where he lived. We were married in July 2002 and settled in Gosport where I’m from. We have two wonderful daughters, Abigail who is 13 and Megan, 11.

When Stuart started having headaches and then a sore neck, I urged him to see the doctor. He struggled on for a bit until the pain was so bad he was vomiting and we got him an urgent appointment. His sore neck had become a sore shoulder, the headaches were worse and there was pressure building up behind his eye.

The doctor could see a shadow behind Stuart’s eye and, in just two days, his condition was deteriorating. A scan at Queen Alexandra Hospital in Cosham revealed he had a tumour on his occipital lobe, the brain’s visual processing centre. He was kept in for a few days and put on steroid treatment to reduce the swelling and, in May 2016, a month after he was diagnosed, Stuart had surgery at Southampton General Hospital.

The tumour is a glioblastoma multiforme (GBM), the worst possible type as it is so aggressive and there is no cure. Stuart’s treatment has been all about trying to stop the tumour from growing and to ensure he has the best quality of life possible.

Twenty two months on from his diagnosis, in addition to the surgery, Stuart has endured radiotherapy and three cycles of chemotherapy. He is struggling with his memory and needs a walking stick to get around. He often forgets that he’s no longer able to drive and it’s heartbreaking having to remind him and I try to do it gently just saying that I’ll drive this time. That has been particularly difficult as his job is travelling the country with an insurance broker.

It is so hard for the girls too and we have been open with them about their dad’s diagnosis and treatment all along. When we get back from a hospital appointment we sit round the table with the girls and look at the scans and discuss what’s happening. While we know things are going to get worse and we have to be realistic we are also hopeful that, as he is young and otherwise healthy, Stuart will beat the odds.

The physical changes in Stuart are hard to bear – the steroids have caused him to gain a lot of weight – but the emotional ones are tough too. Stuart is disorientated, gets very frustrated and has a bit of a shorter fuse sometimes although he still has great jokes. He is very repetitive and the girls are learning that although he wants to hear about their day it’s best if they don’t give him too much detail. Both Abigail and Megan are very protective of him.

We have had the most incredible support from the community where we live in Gosport and Megan’s school, Elson Junior, has been incredible in the support it was given to our whole family. It’s very touching that they are supporting Wear A Hat Day 2018 for Brain Tumour Research.

People say ‘you’re so strong’ or ‘you’re amazing’ but we have no choice; this is how things are, we cope by living one day at a time and by making the most of what we have. The destination is going to be the same whether you are on a fast or a slow boat. We just have to hope we are on a boat which takes a long and winding route.

I’ve had the privilege of visiting the Brain Tumour Research Centre of Excellence at the University of Portsmouth where Professor Geoff Pilkington and his team are focused on improving outcomes for patients and, ultimately, finding a cure for brain tumours. It is so hard to understand why just 1% of the national spend on cancer research has been allocated to this devastating disease.

We have world-class research taking place on our doorstep and I hope that people will support the charity which is funding it.

Although we know that Stuart’s treatment options are running out, we are a strong family unit and will keep fighting for what is right for him. Throughout it all, Stuart has retained his gentle nature. He gets through each day with sheer determination and I am in awe of his positive attitude. He truly is incredible. 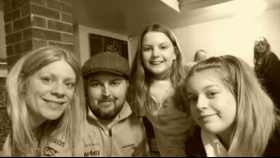