We are grateful to Stuart who worked with us in August 2018 to share his story here. Sadly, he passed away on 10th October 2018. We remember Stuart as we continue our work to raise awareness of this devastating disease and to fund research to help find a cure. He will be forever in our hearts.

For police officer Stuart Parker, retirement began in a completely different way to how he had imagined. The 53-year-old was diagnosed with a grade 4 glioblastoma multiforme (GBM) in December 2017 but despite several disappointments along the way, Stuart is ‘focusing on living’ with his wife Samantha, children and grandchildren.

“The financial implications of Stuart’s diagnosis have been huge. I had to resign from my teaching job to care for Stuart, as such our income halved immediately and we had to cash in our life insurances and downsize our house. We also have to fundraise constantly to enable Stuart to have a good quality of life which has had a huge impact on us; prior to this we were a really private family but now we feel like we’re selling a bit of ourselves to get by.”

Here is Stuart’s story, as told by his wife Sam…

Stuart proudly served the community as an officer with the Derbyshire Police for nearly 30 years and was due to retire in May 2018. However, his final year in the force wasn’t as stress-free as you would expect. In the summer of 2017, Stuart severely injured his back whilst trying to break up a fight on duty and had to go for surgery to treat it.

The operation was a success but immediately after, Stuart started experiencing numbness and twitching in his foot and he was leaning to one side. His GP and consultant both reassured him that the symptoms were simply post-operative and so Stuart carried on as normal and returned to work soon after.

As the numbness got progressively worse, Stuart ended up going to his GP in November to double-check if anything else could be causing it. Astonishingly, the GP told Stuart that he had chilblains and should just put some socks on.

Our daughter Jasmin worked in A&E at Chesterfield Royal Hospital and she told her dad to go in and get checked out. Several examinations later, Stuart was given an MRI scan as a last attempt to find out what was going on. He wasn’t worried at all at this point – he’d been feeling well within himself other than the numbness, even walking the dog for two miles each day and working full-time.

When I arrived, Stuart was on a bed in the ward with the curtains closed. He told me that a doctor said the MRI revealed a lesion on his brain; neither of us understood what this meant and when I went looking for answers, I was just told that the lesion was on his frontal lobe and it wasn’t serious. Stuart was discharged the next day and we both went home none the wiser. As we waited for our neurosurgeon appointment the following week, I anxiously researched the possibilities, overwhelming myself with all the potential diagnoses.

Frustratingly, the neurosurgeon wasn’t much help either. He told us it was a tumour and that Stuart would need a craniotomy. In his words, they would ‘pop open your nut, whip it out and send it off.’ What’s more, the neurosurgeon said the tumour was at the back of Stuart’s brain – not the front as we had been told before. When I questioned this, it turned out that the scans had been looked at upside down.

After one cancelled operation, Stuart eventually went into theatre on 8th December where they operated for six and a half hours – which doesn’t sound like a long time but when you’ve been told your husband could die in theatre, it feels like a lifetime.

The tumour was debulked by 99% and we were told it was a big primary tumour but still we had no idea of what it had been and what his prognosis was. We felt as if the surgeon was avoiding us and all of our questions, which was extremely frustrating and disappointing for Jasmin and me.

Stuart stayed in the hospital for three days and his next appointment was scheduled for 23rd December, our wedding anniversary. The day before the appointment, the receptionist at our GP practice called to say they’d received the results and, not knowing what she was doing, she read out the letter in full: Stuart had a grade 4 glioblastoma multiforme. Just like that, we received the answer we’d been desperate to hear for weeks. The next day, the neurosurgeon was furious that we’d found out. I assume he’d wanted to break the news to us in a certain way, whereas now, I had a whole day’s worth of questions prepared for him. Nevertheless, the neurosurgeon still wouldn’t help allay our concerns and told us that we would have to save our questions for the neuro-oncologist.

Again, we were met with a lack of transparency and communication. The first appointment with the neuro-oncologist wasn’t very helpful as they were the most junior person at the centre. I was at my wit’s end and Stuart was starting to feel like he was being passed from pillar to post. It was for this reason that I requested a second opinion and we went to see Dr Paul Mulholland at UCLH before Stuart’s chemotherapy and radiotherapy began.

Seeing Dr Mullholland was exactly what we needed. He admitted that the prognosis wasn’t brilliant but he also helped us switch the focus from dying to living. Up until then, it didn’t feel as it Stuart had been treated as an individual, he had just been part of a process and I could see this was chipping away at his usual positive outlook. Stuart then started his chemotherapy and radiotherapy which he responded really well to. He was still so gracious in his illness, never once saying: ‘why me?’

‘Focusing on living’ has meant a number of things for us. In March we went to see the Northern Lights which we’ve always wanted to tick off our bucket list. It’s also about learning to enjoy the day-to-day, whether it’s spending more time with our grandkids or Stuart going to watch a live band.

After visiting Dr Mulholland, we also started to fundraise for Stuart to undergo immunotherapy – a treatment that is only available privately. I wrote an article for Derbyshire Constabulary to raise awareness and we also organised fundraising activities such as parachute jumping, an auction black tie event and a picnic in the park. Stuart was blown away by all the support.

In June, we had a blessing ceremony in Greece to celebrate our marriage.

This happy and carefree time came to an abrupt end though as when we got home, Stuart started suffering from focal seizures. It was terrifying; I’d never seen him like this before. He had over 100 seizures in less than 24 hours but I couldn’t get anyone to come out and examine him, and I was reluctant to take him to A&E because the distress seemed to be making the seizures worse. Myself and Jasmin nursed Stuart at home for three days and in that time, we were called back in to hear the results of his latest scan.

Scans up till now had all been positive but now they were telling us that the tumour had grown back, not only at the original site but also in his temporal lobe. Seeing these new scans really had a detrimental effect on Stuart – he couldn’t understand how this could happen when he’d done everything by the book. I trawled through his medical notes for an explanation and found that his results back in December said there was a ‘suspicious enhancement in his temporal lobe’, yet we were only hearing about it now. We felt so let down and just couldn’t understand why this was kept from us. The oncologist assured us that they hadn’t been withholding information but rather that they thought it was seizure activity or pseudo-progression. Either way, Stuart should have been told.

More chemotherapy was the next step for Stuart and we opted for Avastin which is only available privately. Now that the tumour had grown and immunotherapy was no longer an option at this point, we decided to use the donations to help cover the cost. We are so grateful for the support from our friends, family and local community but we can’t rely on these donations forever.

The financial implications of Stuart’s diagnosis have been huge. I had to resign from my teaching job to care for Stuart, as such our income halved immediately and we had to cash in our life insurances and downsize our house. We also have to fundraise constantly to enable Stuart to have a good quality of life which has had a huge impact on us; prior to this we were a really private family but now we feel like we’re selling a bit of ourselves to get by.

The fact is we don’t know how long Stuart will need treatment that we may have to pay for. Avastin is costing £4,510 every three weeks and there’s also the cost of scans and nurses on top of this, but we feel it’s our only option. Our consultant thinks it’s the best option at the moment but delicately asked us to make sure we had enough money as the worst thing would be for the treatment to be withdrawn because we couldn’t pay.

It’s a constant worry but we have no regrets – Stuart started the Avastin last month and the benefits were almost instant. We’re aware it’s not a cure but it’s improved Stuart’s quality of life immensely. For now, we watch and wait and ‘focus on living’. #notdeadyet – as Stuart would say! 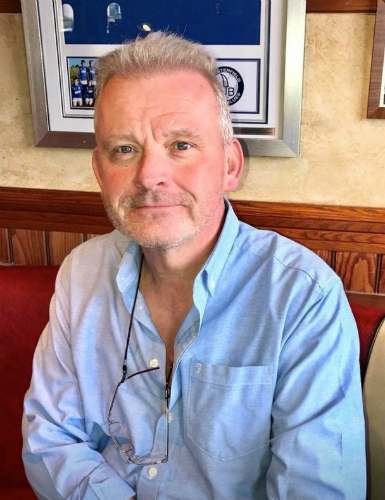