Police officer and father-of-two Steve Holbrook passed away in November 2016. During the last year of his life, he worked alongside Brain Tumour Research to raise awareness of the disease and the underfunding for research which he felt was the only chance of finding a cure. Steve first became ill during a half marathon. Just months later, following surgery and treatment, he took part in the Milton Keynes half marathon to raise much-needed funds for Brain Tumour Research. His story is told in his own words and was last updated a month before he died.

“I find it terrifying and very hard to come to terms with the fact that no-one can tell me what has caused my tumour. I have a number of relatives who have lived beyond their 80th birthday so would have hoped to live a long life, particularly as I had looked after myself. Was it the fact that I was knocked off my bike as a teenager which caused the tumour? Or maybe something to do with drinking tea or running? The fact that so little is known about this illness which is so devastating, not just for patients but for their families as well, is a great injustice and why more research must be done.”

At 37-years-old I am married to an amazing lady and we have two brilliant children aged seven and four. I have served as an officer with Bedfordshire Police for 15 years and took on a variety of roles including that as a neighbourhood police officer in the market town of Biggleswade.

At the beginning of 2015 I was happily training for my third marathon when I began to develop headaches and vision problems. Now I am dealing with the day-to-day challenge of trying to live with a grade 4 glioblastoma multiforme (GBM), the most aggressive form of brain tumour.

I have undergone surgery, chemotherapy and radiotherapy and, at the end of January, we were given the news we dreaded – my tumour is growing once more. Being told that took me to the lowest point since my diagnosis.

Carrie and I met in1998 at Redborne Upper School in Ampthill and were married in 2005. I had always been a bit chubby and, up until 2006, I was smoking about 100 cigarettes a week. At my heaviest I weighed 19 stone and would be out of breath by the time I reached the top of the stairs.

I smoked my last cigarette on 10th October 2006 and started to exercise. I also made big changes to my diet and managed to lose five stone. In the years since then I have kept the weight off and running the Paris Marathon in 2013 was a major achievement for me. Carrie, a Senior Sports Development Officer at Cambridge City Council, has played a big role in helping me achieve this and it felt phenomenal to be able to run through the streets of Paris with Carrie cheering me on.

I’ve worked hard to keep fit. My continuing motivation has been to set a good example to my children and to do all I can to be fit and healthy in order to be here to look after them for as long as I can. It is somewhat ironic to think that it’s not being overweight and unfit or smoking that is going to kill me.

When I first started to develop headaches and vision problems I put it down to low blood sugar as I reached mile eight of the Milton Keynes half-marathon, I lost the peripheral vision in my left eye. I finished the event with a massive headache but it seemed to clear after I had something to eat and drink.

When the headaches became a regular thing, I sought advice from a GP who prescribed migraine medication. It was a pharmacist who told me to go straight to A&E if the headaches continued and that’s exactly what happened. On the morning of 17th March, the pain was so bad that Carrie took me to Hinchingbrooke Hospital in Huntingdon. As she went to get a ticket for the car park I lost all feeling down the left hand side of my body. I feared I was having a stroke. Our son Mason was with me and, although he must have been frightened, he said sweetly: “It’s alright daddy, you’ll be OK.” By the time Carrie could get a wheelchair to help me into the hospital building I felt the most extreme, screaming pain and threw up everywhere.

I realised things were pretty serious. The morphine and paracetamol I was given intravenously didn’t begin to touch the pain so I was put on steroids which, thankfully, helped. Within a couple of hours I was having an MRI scan and I was terrified to be told I had a mass on my brain. I found it very disturbing to be put on an emergency ward where the other patients were mostly much older than me and clearly very ill.

I had put so much work into getting myself healthy that I never expected anything like this would happen. It’s a dreadful pun but the thought I might have a tumour never even entered my mind. I was terrified of death and found myself in a very dark place, imagining that I had just months to live and wouldn’t be here to see my kids grow up.

There was so much information being thrown at me it was hard to take it all in and I felt as if people were talking about palliative care straight away. Carrie took things very hard and we told Mason and his older sister Emma that I had to have an operation to remove a little lump which was causing my headaches. Emma is aware that I have cancer but doesn’t really understand what that means.

A follow-up MRI scan showed the tumour was primary and that it hadn’t spread from anywhere else. I was referred to Addenbrooke’s Hospital in Cambridge and our worst fears were confirmed: I had the most aggressive form of brain tumour, a grade 4 gliobomastoma multiforme.

On 10th April 2015 I had surgery to remove the tumour which had grown to around four cm at the back of the right hand side of my brain. I recovered well but was worried about how the kids would be affected seeing me after such a major operation. We had told them I would have a big bandage on my head like Mr Bump although I came home with no dressing and a 15cm long incision held together with staples and stitches across my partially-shaved head. Although it looked pretty gory, like a very red and swollen crust on a Cornish pasty, the kids seemed fine.

Unbelievably, two weeks after surgery I was back out running which felt great albeit a little disconcerting to hear my skull creaking where the bone had yet to fuse back together.

Despite the fact that my tumour was incurable and it was inevitable that it would come back, I felt quite positive. I was able to have radiotherapy and chemotherapy and although I was told the average life expectancy is around two years, I felt as if I had at least five ahead of me.

I find it terrifying and very hard to come to terms with the fact that no-one can tell me what has caused my tumour. I have a number of relatives who have lived beyond their 80th birthday so would have hoped to live a long life, particularly as I had looked after myself. Was it the fact that I was knocked off my bike as a teenager which caused the tumour? Or maybe something to do with playing rugby as a prop, when I was a younger man? The fact that so little is known about this illness which is so devastating, not just for patients but for their families as well, is a great injustice and why more research must be done.

Although we talk a lot, I can see the pain in Carrie’s eyes when we voice our fears about what lies ahead. We will organise bereavement counselling for the children and I know that I will need to speak to my friends and family, who are an enormous support, to ensure that my wife and children are cared for.

I have follow up scans every three months and in January, six months after my operation, the results showed that the tumour was back. It was a terrible blow and the lowest point I had felt since my diagnosis. I saw various specialists in Holland and Leeds and subsequently took part in a trial. Unfortunately, I was randomised to the standardised arm of the trial which meant I went on a course of the existing chemotherapy drug Lomustine and didn’t get a shot at the new drug. I started in May and underwent three rounds of treatment.

Unfortunately my most recent MRI has shown further progression and we are now exploring further treatment options. My health has deteriorated, I am confused, experiencing regular headaches and, unfortunately, experienced my first seizure in September. I am now back on treatment, this time with chemotherapy drug carboplatin. 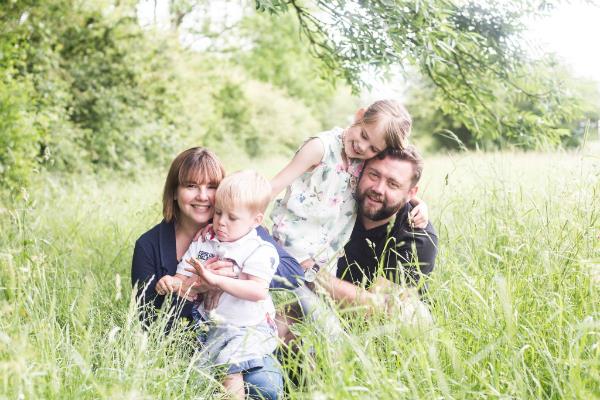