Steve was a devoted husband to Lina and father of three children - Kevin, James and Sarah - when he died of a brain tumour at the age of 59 in June 2012.

“Knowing Steve and having him in our lives, I think we all can take strength from the wit and unwavering determination that he showed everyday whilst fighting this horrible disease…. This Christmas will be so hard without him, but I know there will be lots of great stories and funny memories to share, which will in time give us all the power to get through this difficult time.”

For a few months Steve, didn’t really feel himself, said strange things and found that when driving he was forgetting where he was.   He went to the GP several times and was misdiagnosed with an ear infection twice.

Finally, Steve was taken into hospital following a really excruciating head-ache and after lots of tests it was found that there was a “significant shadow” on his brain.  He underwent surgery and it was then that we had to come to terms with the fact that this incredible man had been diagnosed with a grade IV gliobastoma multiforme.  We were given the devastating news that he had just three months to live.  Steve was 58 years old.

Steve had always worked hard, running his much loved pub - The Orange Tree - and also driving tipper vans to make ends meet.  It was difficult for him to give up work, and give up driving, which he loved.

In Steve’s life everything moved at a very fast pace - he was the life and soul of our family.  He was always spontaneous, organising outings at a moment’s notice and it was the toughest thing in the world for him to be told to slow down and rest.  He would constantly talk about when he would be able to get back to work.

Steve embraced chemotherapy and fought from the beginning until the end for his life because of his great love for his family. His wife, Lina, continually researched alternative therapies and foods that could give him the best chance of fighting this horrible disease.   Meanwhile Steve did his best to fight against these remedies so we would all joke with him and call him a “wuss’” when he complained about eating a particular mixture.  We would all taste the mixture saying "actually it's quite nice!", to encourage him to try and eat it.  We were also, however, all along slipping him a cheeky treat here and there to keep up his spirits!

Overnight Steve went from being a healthy man with the biggest zest for life, to taking ridiculous amounts of medication.  He never once complained about this, even at the very end when he was so very poorly, nor about the pain he must have been in.   Not once did he show his family how scared he must have been.

He planned holidays away - a few days in France to drink wine, eat cheese and sit in front of a log burner and a trip to the US deep South, visiting Atlanta, Nashville, Memphis, Mississippi and New Orleans, where we ate American food, drank beer and listened to live bands – something which he loved to do his entire life.

Family was hugely important to Steve and having the pub was a really great way to get everyone together, be it Christmas drinks, New Year’s Eve, or birthdays.  All our family events were held in the pub and Steve would be dancing behind the bar, absolutely in his element.

On 22nd June 2012, Steve sadly passed away after an eight month battle.  No doubt his special organic diet that Lina tirelessly made night after night - at the end she was juicing on the hour, every hour - contributed to the great eight months we had with him (five months longer than the specialists had said).  We were lucky to have had a wonderful Christmas, his birthday in January and Father’s Day with him the week before he died.

His funeral was a packed event with everyone showing their respects to this amazing man who touched everyone that he met - the funniest, most intelligent man whom I have ever known and who I will ever know.  In the church his children all spoke of amazing memories, funny stories and Steve’s favourite things, which was really uplifting for everyone.

Knowing Steve and having him in our lives, I think we all can take strength from the wit and unwavering determination that he showed everyday whilst fighting this horrible disease.

His son, James, was inspired to run a half marathon for Brain Tumour Research and both daughter, Sarah, and daughter in law, Emma, raised money in aid of Cancer Research, all in Steve’s memory.

This Christmas will be so hard without him, but I know there will be lots of great stories and funny memories to share, which will in time give us all the power to get through this difficult time. 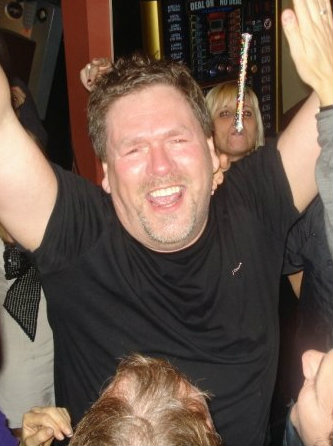