After experiencing numbness in his face, business owner Stephen Banks was told in 2011 that he was living with a low-grade brain tumour. Sadly, the tumour was discovered later to be high-grade and he was told he would need to undergo treatment to control its growth. Adamant in keeping the news to himself and his wife Judith, Stephen continued to keep up appearances and continue as normal, even with a prognosis of just 6 months. Though Stephen passed this mark, he lost his battle in September 2016, leaving behind a devastated Judith to break the news that Stephen had been battling cancer for over five years.

“The prognosis wasn’t good and being told that your husband may have as little as 6 months to live was heart-breaking. I broke down in tears as we were told the news, but I remember Stephen’s only response was “Well that’s a bugger!”. Even being told that they couldn’t remove the tumour and he would need to undergo chemotherapy and radiotherapy didn’t break him.”

Here is Stephen’s story, as told by his wife Judith…

My husband Stephen was a Lecturer of Mechanical Engineering at Highbury Technical College for over 30 years, but in the latter years attended an Engineering show and found an interest in Airsoft guns. So in about 1996 he made the decision to set up “Hotshots”, an Airsoft Shooting Gallery that we took to Military and Family events around Hampshire. The family worked hard at the business and this then became Combat South and we progressed to offering Airsoft skirmish games at our 90acre of woodland near Wickham in Hampshire.

It was September 2010 when Stephen started to experience numbness in his face, which he initially thought might have been down to his teeth. As he had been struggling with pain in his ankle as well, so he decided to take himself to the GP to get checked out.

A couple of weeks later, I found a letter addressed to Stephen from the St Richard's Hospital in Chichester stating he needed to go to the Neurology Unit the following week for a scan.

When Stephen got home that day I asked him: “What’s going on?” as I didn’t even know that he had visited the GP. Stephen was his usual self and told me: “It’s no big deal” and that he was fine. He also added that the GP had insisted someone else examine him, but it was nothing to worry about.

After having the scan, we were asked back to the hospital to talk through the results. When the doctor said Stephen had a brain tumour, but the indications were that it was benign, I was in shock and felt very emotional, although Stephen didn’t flinch. He just said: “Well we better just get on with it”. The doctor explained that they would arrange a biopsy to confirm this.

Stephen was very adamant that he didn’t want anyone to know about the diagnosis and, although I found this difficult, we agreed that once we knew what type of tumour it was we would tell some people. Our two grown up sons, Paul and Russell, were aware that Stephen was having tests, but that was all the information we shared.

After several months of to-ing and fro-ing and cancellations, the hospital confirmed a biopsy date, Stephen finally went into theatre in May 2011 and then spent two days in the high dependency unit recovering. To our surprise, Stephen was allowed home soon after leaving the unit, but the progress was short lived as Stephen suffered with agonising headaches and we chose to take him back to Southampton Hospital to receive pain relief.

At the time, Paul, our eldest son, was due to go to America to take on a new job. Initially turning it down to stay in the UK to be with the family, Stephen insisted he went and told him not to worry about him, and as always saying “I am fine!”.

It was not long after, in June 2011, when our world started to crumble as I sat in the hospital with Stephen and heard the surgeon say their initial prognosis was wrong. They proceeded to go into detail about the type of tumour that Stephen had, which was called a glioblastoma, and how treatment options would be limited as it was a very aggressive type of tumour. The prognosis wasn’t good and, being told that your husband may have as little as 6 months to live, was heartbreaking. I broke down in tears as we were told the news, but I remember Stephen’s only response was: “Well that’s a bugger!”. Even being told that they couldn’t remove the tumour and he would need to undergo chemotherapy and radiotherapy didn’t break him. He just remained calm and composed, asking the doctor a few questions. I think he was focusing on trying to be strong and taking it all in.

Over the following months, Stephen coped remarkably well with the treatment and was adamant that he wanted to continue to carry out all his daily work duties as normal, although this wasn’t as straightforward as he had anticipated. But Stephen never gave in.

He learnt to use his left hand and adapted the way he worked to enable him to continue doing what he loved most.

The numerous rounds of treatment left Stephen with a bitter metal taste in his mouth and a suppressed appetite, resulting in him losing a lot of weight and muscle mass. Otherwise, easy tasks like showing people round the site, lifting objects and repairing guns were tiring and Stephen would choose to be in the office to focus on paperwork instead. Our son Russell has worked at the business since he was a teenager and when Stephen became unwell he stepped up and helped his dad more, organising games and taking over the day to day tasks.

Over the following few years, Stephen kept up appearances and remained headstrong that the tumour was not going to defeat him and that he felt fine. In his mind he had beaten the prognosis of 6 months, so he was OK. He really didn’t want a fuss, he was a very private person and remained steadfast in his resolve that as few people knew of his battle.

Since his diagnosis in 2011, only Russell and Paul knew of their dad’s tumour. Some of our family and friends that worked closely with us at Combat South were told. Some had assumed that Stephen’s health had deteriorated with age or he had suffered a stroke and that had taken its toll on him, but it was never brought up.

In 2016, after a routine scan, we were told the tumour was growing and Stephen’s only option was to have another round of chemotherapy, but he reacted badly to the treatment and after 2 sessions and a further MRI it was decided that he should not continue with the treatment.

Over the following six months it became increasingly hard for Stephen to stay mobile. As the house gradually became fitted with more equipment to help him, the more Stephen found it easier to stay at home.

After speaking openly with a Macmillan nurse about how hard it had become to look after Stephen and keep him safe, as well as the business, we discussed that it might be a good idea for him to go into a local hospice for a week, so that we could organise a care plan and enable us to put things in place for him to return home. Also, to give me a break, so I suggested this to Stephen and he said “OK”.

However, Stephen never came home from that week in the hospice. After contracting a chest infection, he passed away peacefully on the 2nd September, with our family at his side.

Stephen’s death shook the whole family, but for those who had not been told it was difficult dealing with all the questions about the tumour and the sense of guilt for not sharing Stephen’s battle, is still one of the hardest and most upsetting things I have ever had to deal with. Looking back, I followed Stephen’s wishes and, although it has been difficult for me, he was fighting the disease and it was his choice and I respected that always. He was my strength through it all.

The boys have been amazing in supporting me, and having Russell’s partner Jenna and their children Lucas, eight, and Alina, three, living close by, really helped me have some normality in the months that followed. The rest of my family have been a great support as have our friends, who to me are an extension of that family.

Since 2014, we have supported the charity Brain Tumour Research and taken part in their annual Wear A Hat Day fundraising event every March. To the outside world we had “just picked a charity to support” but to us it had such a deep-rooted meaning. I have heard so many stories in the last few years of other families that have been affected by this disease which is so unpredictable and can affect anyone of any age and background.

Over time, I hope that my heart aches a little less. Even now, walking through the woods I see Stephen with his woolly hat and Combats. Combat South was everything to Stephen and being able to have Russell and Paul to take over the business would have meant everything to him. It’s just so sad he won’t be here to see it.

“YOU ARE NO LONGER THERE,

BUT YOU ARE EVERYWHERE WE ARE ARE” 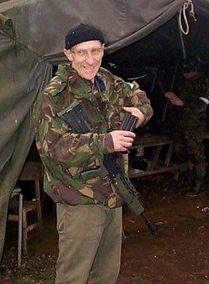