Simon was the youngest of three brothers with a daughter, Livy and a fiancée, Sarah. He was a very popular guy, fit and healthy, and enjoyed many interests over the years including football, rugby, music and motorcycling. He always had a happy-go-lucky outlook on life and many friends to share it with. Then in the summer of 2009, whilst at a wedding, he suffered a seizure affecting the left side of his body. Over the following weeks, this ultimately led to his diagnosis with an anaplastic astrocytoma brain tumour which was inoperable.

“My biggest regret was that I didn’t go straight down to the hospital the previous evening. First thing the following morning, I received another phone call from Sarah, this time saying I needed to come immediately. I dashed down and was shown straight to his bed, just in time to say goodbye.”

Here is Simon’s story as told by his brother, Dave…

I was the middle one of three brothers – Paul, my eldest brother, was born in 1965 just over two years before me in 1967 and then Simon, seven years after me, in April 1975. It felt as though we had a hand in parenting Simon as he was so much younger than us. Simon grew into a healthy, fit young man, who was outgoing and friendly with a wicked sense of humour and time for everyone. He had several jobs over the years in leisure and engineering, finally ending up working for Sirus Automotive, specialising in drive-on wheelchair vehicles. He absolutely loved his job, which included delivering the vehicles and demonstrating them to potential customers.

During the summer of 2009, Simon went to a friend’s wedding in Norfolk and, out of the blue, experienced what seemed to be a fit down one side of his body. Sarah took Simon to the local hospital where they suggested he may have had a minor stroke, but as he was feeling ok they told him he could go back to the wedding celebrations.

Back home in West Bromwich, he went to see his GP who immediately referred him to the hospital for checks. Simon had a number of tests including CT and MRI scans and later received a phone call from the doctor confirming they had found something on his brain.

When Simon called to tell me, he said the doctor had suggested that it could have been there for some years and may be a cyst, but that he needed to go in for more tests.

In September 2009, I went with Simon and his fiancée Sarah to see the consultant at the Queen Elizabeth Hospital, Birmingham. He told us that he was booking Simon into hospital for a few days for more tests. It was then that Simon was diagnosed with an anaplastic astrocytoma brain tumour in the centre of his brain - in a position that was not operable without leaving him in a disabled state. His consultant didn’t say Simon had cancer at that point. He said the tumour could still be low-grade and that they would monitor him over the coming months whilst giving him medication to control his seizures.

Simon was invited for another MRI scan in November 2009. However, he thought that this appointment had been made by mistake, having only just had a scan a few weeks previously and being told that he would have further scans every six months. He telephoned the hospital to advise them that he had recently had a scan and cancelled the appointment.

Over the following 18 months, Simon had regular checkups at the Queen Elizabeth Hospital, meeting mainly with his medication nurse. When we asked him how things were and if he needed another scan he told us the nurses had said this was not required yet, which we took as positive news. Simon did suffer during this time with headaches and also I noticed him stumbling up the steps at the Hawthorns at a West Bromwich Albion game, which he explained as a loss of feeling in his left foot.

Simon remained positive and did not complain about his situation. He was moved to a desk-based role at work, due to not being able to drive, and moved in with Sarah, living in the house right next door to our Mum, which kept him busy. They often had his daughter Livy to stay, who was four-years-old at the time.

Simon then had an appointment in March 2011 with his consultant, who questioned the lack of scans over the previous year and booked him in straight away for an MRI. This scan revealed that the tumour had grown significantly and Simon was immediately scheduled for a biopsy. I was very concerned that Simon had been left for so long without any monitoring and had trusted this was all in order with Simon’s regular appointments at the hospital. I had tried to remain positive for Simon, whilst believing that the Queen Elizabeth Hospital were doing everything they could for my brother.

I started doing some research into biopsies and was concerned about this intervention but, in the end, we were guided by the experts. The results of the biopsy confirmed that Simon’s tumour was now grade 3. It was the first time the term ‘cancer’ was used, which was a big shock to us all as until this point we thought it could still be low grade.

We went home and it hit Simon what the full situation was. I remember him looking to the sky and shouting: “I’ve got cancer.” This was the only show of emotion I can really remember as I think he was trying to protect Mum and all of us from reality.

An appointment was made to have a mask fitted for radiotherapy, but two weeks after his biopsy, Simon was at a barbecue at the home of his best friend Stuart and his partner Louise who lived opposite when he started to feel very ill. Livy was there, along with Sarah, and they took him back home. The next day he was still in difficulty and he asked Sarah to call for an ambulance. It was Easter bank holiday Monday. Simon walked into the Ambulance telling Livy: “I am ok. I am just going to the doctor to be checked out.”

He was taken to Sandwell Hospital, just around the corner from his home. They gave him a higher dose of steroids after consulting the Queen Elizabeth Hospital and he was due to be transferred there the next morning. He was monitored throughout that night and was responsive as normal until the checks at 9:30am, when he suddenly became un-responsive, having suffered a sudden cerebral swelling.

My biggest regret was that I didn’t go straight down to the hospital the previous evening. First thing the following morning, I received another phone call from Sarah, this time saying I needed to come immediately. I dashed down and was shown straight to his bed, just in time to say goodbye.

I wrote a letter to the hospital asking for answers to unanswered questions – principally why Simon hadn’t had regular scans which could have picked up earlier that the tumour was growing and in turn would have led to treatment being started earlier.

We went to see his consultant to talk through our questions and he admitted that from the scanning perspective there had been a mix-up in the paperwork which meant that the next scan wasn’t triggered automatically. He said he would see that procedures were put in place so that this couldn’t happen again, but this was obviously too late for Simon.

We received a letter of apology from University Hospitals Birmingham, which was disappointing. I’m aware that the radiotherapy treatment could have left him in quite a disabled state and as the consultant explained, the outcome for Simon may have been the same even with earlier treatment, given the type of tumour and its position. I had to tell myself that with the type of tumour that Simon had, there was never going to be a good outcome so maybe it was for the best we didn’t have to see him suffer and that the end came quickly.

Added to this, we have the memory that Simon had moved into a new home next door to Mum’s with Sarah and managed to enjoy 18 relatively happy months. He was very happy with Sarah and said she was the best thing that ever happened to him, along with having his daughter Livy.

Simon lives on in his daughter. We see Livy all the time and she reminds us so much of her dad, which is lovely. She often comes on holiday with us and I recently took her to her first game at West Bromwich Albion.

Since we lost Simon aged 36, we decided to raise money for Brain Tumour Research as it’s the biggest cancer killer of children and adults under the age of 40... yet just 1% of the national spend on cancer research is allocated to this devastating disease. This disease will impact more people in the coming years so I feel it’s a race against time to get a breakthrough that could help people in the future to live and survive this devastating disease.

Over the last few years, my brother Paul and I have together raised more than £13,000 organising events which usually involve live music as Paul is a bit of a festival organiser in Helston, Cornwall. He also organised an evening with Eddie “The Eagle” Edwards in the build up to us running the London Marathon on 26th April 2015 - four years to the day since we lost Simon - not something we ever thought we could do.

Simon was my brother and my best friend. I miss him every day and I hope that by raising both funds and awareness for Brain Tumour Research we can help support this vital and underfunded work that one day might make the difference to people diagnosed with brain tumours and their families.

This year, our friends Nigel and Ellie are running the London Marathon for both Simon and Ellie’s cousin Edward Pearson who passed away last January with a glioblastoma multiforme tumour. It seems strange that this couple have been doubly affected by this disease which is usually viewed as a rarer form of cancer. 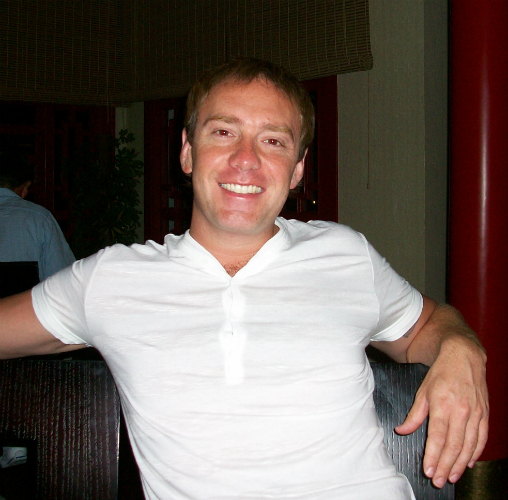