Saqib Ahmed from Rochdale was just four years old when he was diagnosed with a diffuse intrinsic pontine glioma (DIPG). He had been complaining of headaches in July 2021 and was taken to his GP several times, but his family was told nothing was wrong. His mum, Fauzia Ashraf, insisted the GP help her son. On 4 October 2021, Saqib died peacefully with his parents by his side. A year after his death, his family took part in the Walk of Hope to raise money for Brain Tumour Research.

Saqib was a happy and healthy boy, and he loved going to nursery. He was so lovely and kind, and everyone who knew him loved him.

During the summer holidays in July 2021 when he was four, Saqib started complaining of headaches. He would cry for a few minutes and then he would be OK again. 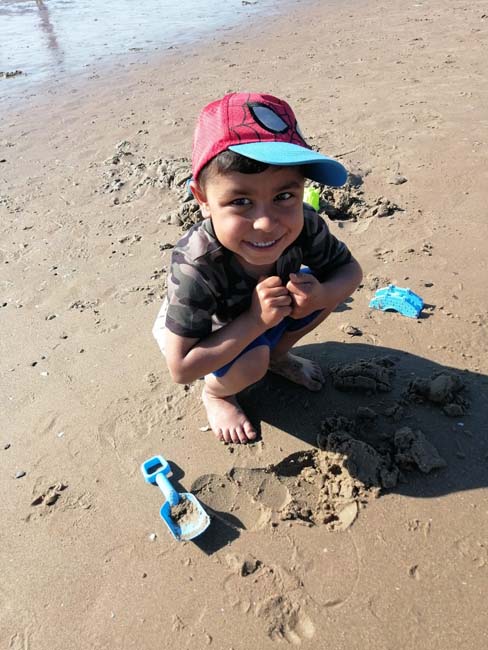 I took him to the GP and insisted he must help me, but he told me that everything was fine. It didn't occur to me Saqib would need a scan or that it would be a brain tumour, not once. I just knew headaches go away and that something was not right. I really couldn't cope and needed the GP to stop telling me he's fine and to listen to my concerns.

Shortly after, Saqib started to have a teething dribble which I thought was odd. I was again told he was fine.

“Then in August, Saqib started shuffling down the stairs on his bottom which was really odd. When I asked him why he was doing that, he said he just wanted to sit. I just knew that something wasn’t right.”

He would cry and hold his head for a few minutes every other day, but then he would be OK again and carry on playing. Saqib attended karate and swimming lessons right up until he was hospitalised following the devastating diagnosis.

I was 35 weeks pregnant with my third child, Atif, at this point. 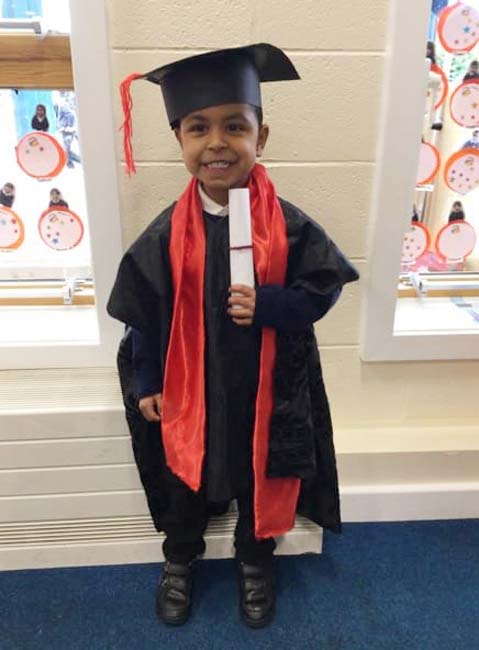 I took Saqib to the optician. I knew he didn't need glasses, that he had something more than just a sight issue. Despite relaying all the sudden changes and most worryingly, the repeat headaches to the opticians, I was told he was fine, but he needed glasses for short sightedness.

When he got them, he didn’t get a headache for four days, so although I was still very worried about him, I started to feel a bit of relief. But on 12 August, he cried and said, 'Mummy my head hurts'. All along, I knew the glasses were not the solution.

The next day, I took him to the GP again and  I refused to leave until he helped me. The GP reluctantly referred me to Oldham Royal Hospital where Saqib had a CT scan. 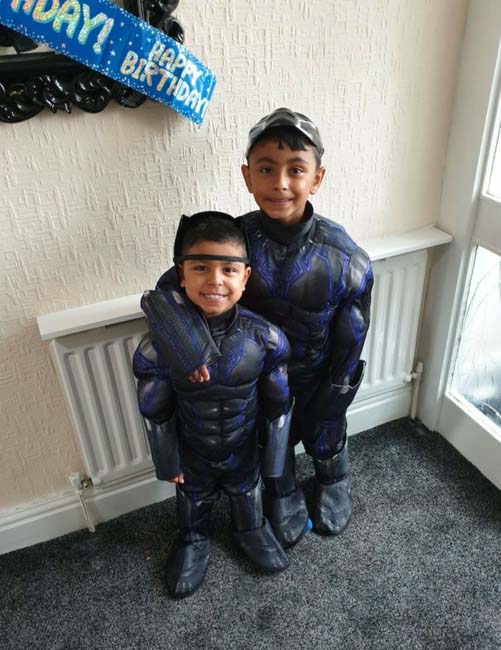 At the hospital, Saqib looked absolutely fine, and he was giggling and joking, but then I was told that Saqib had a cancerous tumour in his head.

“I was in such shock and thought ‘how can he have a brain tumour? He looks fine and he’s playing’. From that moment, it felt like my life ended and I just broke down.”

On 16 August 2021, Saqib had an MRI scan at Royal Manchester Children’s Hospital. The oncologist told me Saqib had a diffuse intrinsic pontine glioma (DIPG) and there was no cure and no treatment for it because the tumour was on his brainstem.

“I’ll never forget the oncologist telling me that no child has ever survived a DIPG. He said it will take away all of his functions until it eventually takes away his breath. I could hear him, but I couldn’t comprehend anything he was saying.”

He said DIPG is very aggressive which is why Saqib wasn't able to sit up or speak. He was unrecognisable. He began to use his fingers to point and nod his head to communicate with us.

“In my head I kept thinking ‘who is this boy?’ Where had Saqib, our bubbly, cheeky, cute little boy gone? And who was this boy lying on the bed unable to move?”

He really looked the picture of the diagnosis given to us that same day. Reality kicked in as I stared at Saqib and relayed what the oncologist had told us. He really was dying. He really did have cancer in his brain. It really has taken his bodily functions and so will take his life, as explained to us in the diagnosis meeting.

The next day, Saqib wouldn’t wake up. When he came to, he wasn’t talking, and he couldn’t get off the bed. It was all too much, and he was put on palliative care. 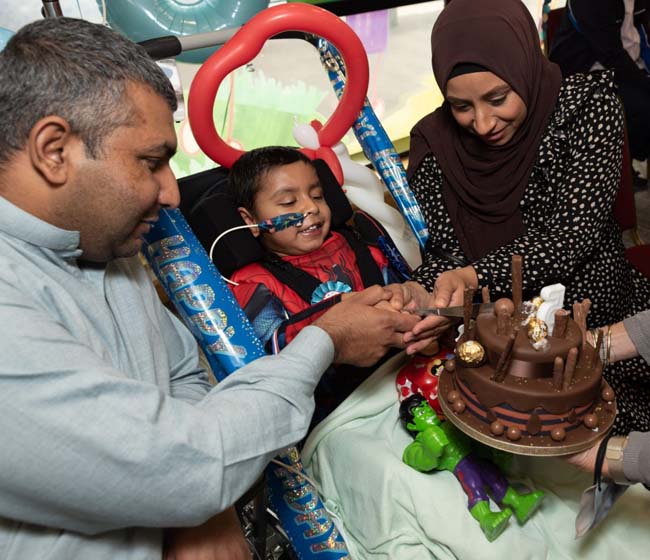 It was Saqib’s fifth birthday on 19 September and we celebrated with him, along with his brother, Aqib, who was seven at the time, in the hospital. Unfortunately, Saqib was so unwell he couldn’t eat his birthday cake. It was the first of our bittersweet celebrations as a family. 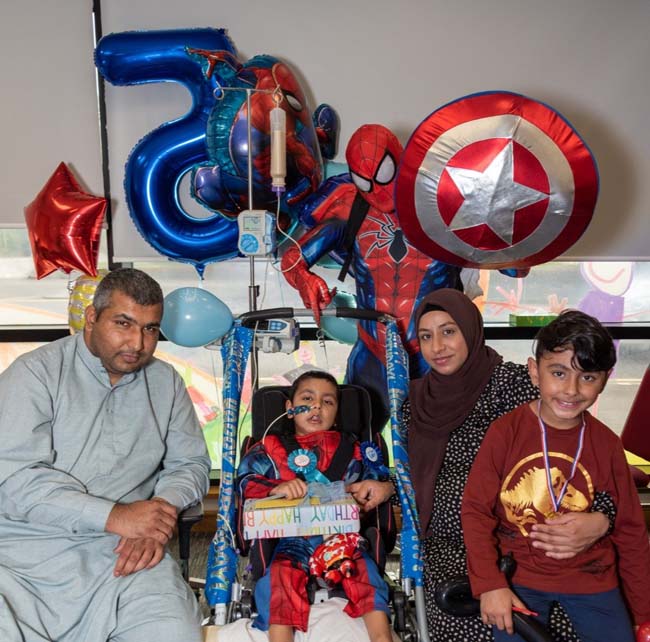 I was also two days overdue, but I didn’t want to be induced because of Saqib’s birthday. I waited until the next day, and I gave birth to baby Atif on 21 September.

“Four hours after giving birth, I wanted to see Saqib, so I took Atif to see his older brother. Saqib was so happy when he saw the baby and I have a lovely photo of them together.” 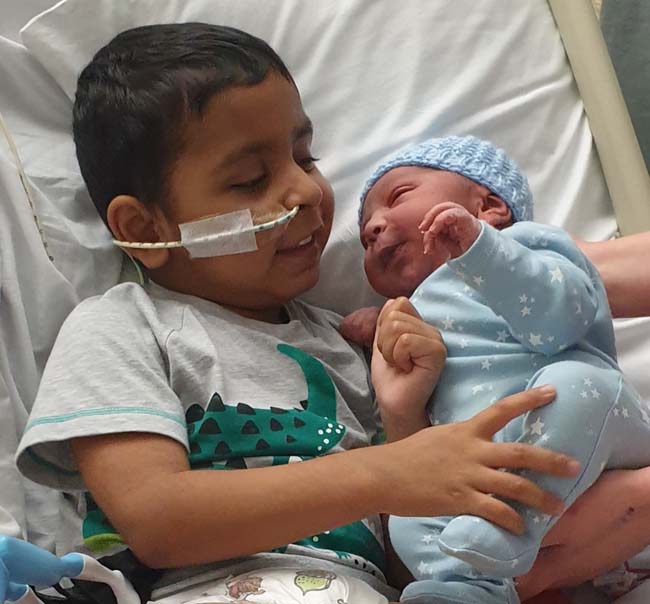 Saqib was so excited to be a big brother and to start primary school.

Saqib began to deteriorate, and we could see he was dying. On 4 October 2021, Saqib died peacefully with my husband, Mohsin, and me by his side.

I still live most of my life not believing it. We have a massive black hole in our lives. Everything happened so quickly, and it couldn’t have happened to a nicer boy. Saqib was so happy and excited to be a big brother.

We brought our new baby Atif home, but Saqib didn’t come home. It never occurred to me that one of my children would die.

My faith, Islam, has been such a comfort as we fully believe children that die all go to heaven. But as bereaved parents we will always miss Saqib and always wish he was still here with us. He came and brought us so much joy but when he left this world he left in a very cruel and sad state.

To have cancer in your brain, your key organ, is devastating. For your child to have cancer in his brain is soul destroying. For it to end his life is beyond the physical, mental and emotional pain known to humankind. The pain never goes and never ends.

Saqib is so missed by his brothers. Aqib was always with him, and he often tells me how he can't believe Saqib died, and we hold each other and share memories of his little brother. It’s so heart breaking that his little brother never got to know Saqib or play with him. 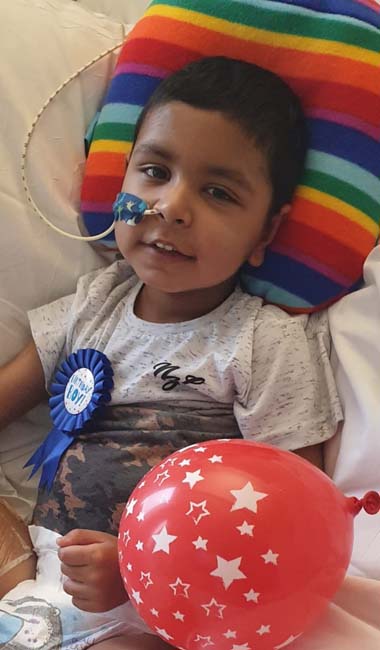 On 24 September 2022, my family and I took part in the 5km Walk of Hope through Woodbank Park in Stockport where we raised more than £1,100 for Brain Tumour Research.

It is so important to raise money for research; research will lead to cures, it will help children, and it will help the next family that sadly receives this awful diagnosis. 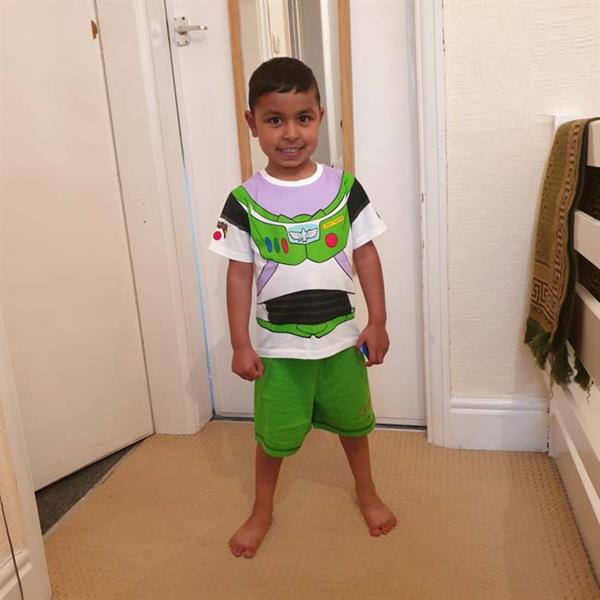