Rowena was diagnosed with an inoperable brainstem glioma and died 17 months later at the age of four. Only now, nearly 20 years on, and in the hope of helping others, has her mum Elaine found the words to tell her story.

“It is only now, nearly 20 years later, that I am able to talk about what happened to Rowena. It is shocking to learn that there is still no cure and that brain tumours kill more children and adults under the age of 40 than any other cancer yet just 1% of the national spend on cancer research has been allocated to this devastating disease.

I have finally found the words to tell Rowena’s story in the hope it will help others. We must find a cure for this disease which has torn my family apart, leaving a crevice which cannot be filled and those of us who remain with a legacy of despair.”

Rowena’s story is told by her mum Elaine Rust:

Rowena was always my angel baby. She was such a pleasure in every way which made life easier as, by the time she came along, her sister was a very bouncy and lively two-and-a-half-year-old.

The first indication we had that anything was wrong was when Rowena fell out of bed one Christmas. We had been staying with relatives in Yorkshire and I thought nothing of it at the time. There was a lot of snow that year and I noticed that Rowena was struggling to walk through it and, on other occasions, she reverted to crawling which was out of character. Another time she had a tantrum while we were shopping which wasn’t like her at all.

The doctor diagnosed an ear infection but, as much as I wanted to believe that was true, it didn’t add up. A second doctor suspected it was something more sinister.

We lived in Chandlers Ford, Hampshire, and at the time Rowena was diagnosed I was in the early stages of my third pregnancy which brought additional anxiety. There were numerous MRI and CT scans and I was concerned about any effects this might have on my unborn baby. Rowena’s dad was away on business and I was alone at the hospital as I searched my soul for an explanation for those little things which seemed to be adding up to something serious – was it the fall out of bed? I believed absolutely that it was something which could be treated and cured and not once did I think that Rowena had a brain tumour.

The tumour was identified as a brainstem glioma which was inoperable, she was diagnosed at the age of two-and-a-three-quarters and died in 1998, 17 months later.

We were transferred from Winchester to Southampton General Hospital. Rowena had suffered a seizure and needed a shunt in her skull to drain away fluid which had built up as a result of pressure caused by swelling. I was told right away that there was no cure and the only thing to be done was for her to undergo radiotherapy and take a course of steroids which would alleviate the symptoms.

Rowena was so little, not even three, yet she was so good. All along, she did everything that was asked of her, she didn’t cry and it was almost as if, in some way, she knew this was how things were going to be.

Radiotherapy was dreadful. She had to have a plastic mask made which covered her entire face, immobilising her during treatment. Traumatic enough for an adult let alone a little girl. Rowena took her beloved soft toy Penny, a puppy which featured in the Disney film 101 Dalmatians starring Glenn Close.

No-one else was allowed in the room and I had to talk to her through a speaker system set up in an adjoining room. It was heart-wrenching. At least the treatment did help to extend her life and she out-lived the initial prognosis.

This whole period was devastating. As a parent you think you should be able to find a solution to all of your children’s problems and words still cannot describe how it feels to be told there is no cure.

What happened to Rowena woke me up to the reality that I was unhappily married and that I needed to make a clean break for the sake of myself as well as the children. Rowena’s father and I broke up and, once her treatment was finished, I tried to make the best of things.

Just like any other little girl, Rowena liked dressing up, she was mischievous, laughed easily and loved playing with her big sister. She took ballet classes but would sometimes struggle with what we called her “naughty foot” and loved playgroup where the staff did a wonderful job looking after her.

It is so desperately sad that Rowena didn’t get the chance to grow up. To this day, and along with her beloved soft toy Penny, I have a photo of her by my bed. It was taken just two months before she died and you wouldn’t even know she was ill.

My son Stephen was born in September 1997 and Rowena died on 11 July the following year. She spent her last days at Naomi House Hospice and I have treasured memories of the time we were able to be alone, just the two of us, sitting on a bench in the rose garden.

I was able to hold Rowena on my knee as she took her last breaths and I sat cradling her for hours, unable to let her go, after she died.

In the weeks and months that followed my eldest daughter Katherine was the one to look after me. I remember feeling like a weeble as I grieved for Rowena, I was a single mum and was looking after a baby and a six-year-old. Somehow, no matter what was thrown at me, I managed to get back on my feet.

It is only now, nearly 20 years later, that I am able to talk about what happened to her. It is shocking to learn that there is still no cure and that brain tumours kill more children and adults under the age of 40 than any other cancer yet just 1% of the national spend on cancer research has been allocated to this devastating disease.

In July 2017 my husband Robert and I took part in the RideLondon 100 cycle event to raise money for Brain Tumour Research. I have finally found the words to tell Rowena’s story in the hope it will help others. We must find a cure for this disease which has torn my family apart, leaving a crevice which cannot be filled and those of us who remain with a legacy of despair.

If you have been inspired by Rowena’s story, you may like to make a donation to Brain Tumour Research via Elaine’s JustGiving page or leave a legacy in your will via https://www.braintumourresearch.org/legacy 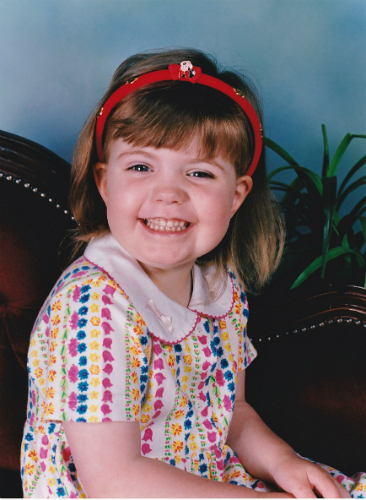