After experiencing a sudden seizure at the family home, 56-year-old Robert Rennicks was rushed to hospital with suspected diabetes in May 2016. After weeks of numerous tests and scans, Robert was shocked to learn that the seizure had actually been caused by a brain tumour. Due to its size, location and aggressive nature, removing the tumour wasn’t an option and his only choice was chemotherapy and radiotherapy to help control its growth. Sadly, less than six months after diagnosis, Robert lost the battle and died just before Christmas 2016.

“I had to go back to university for my exams, but Mum assured me that she would call when they knew anything. It was the following week that I got a call from Mum suggesting that it could potentially be quite serious. The results from the scan showed Dad had a mass on his brain and they thought it might be cancer.”

Here is Robert’s story as told by his son William…

In 2016, I was approaching my first summer exam season, studying a three-year BSc in Economics. Having been away for a few months, I decided to return home to Brierley Hill, West Midlands for the weekend, so that I could study, spend time with my family and enjoy some home-cooked food.

I was revising in the dining room, when I heard some odd noises coming from our utility room where Dad was working at the computer. My dad’s humour has always been a little silly, so I assumed he was trying to be funny. It was the cry for help that came from my Mum two minutes later that made me leap to my feet and run to see what was happening.

I ran into the utility room to see my Dad on the floor with Mum kneeling next to him. He appeared to be having some sort of convulsion and had lost consciousness. I began to check for his pulse etc whilst my Mum called for an ambulance. Even though I was scared, I knew it was important to keep calm and continue checking his vital signs.

By the time the paramedics arrived, Dad had regained consciousness but they continued to check him over. They thought that he was maybe diabetic as his blood sugar level reading was low. Slowly, after tea and biscuits, his levels returned to normal but they insisted he had to go to hospital. Dad couldn’t remember anything about collapsing and his last memory was a strange numbness in one half of his face, resulting in him checking himself in the hall mirror. However, there was nothing visible and the next thing he remembered was waking up in the utility room.

He was admitted for further tests including a CT scan. Even though he was still feeling numbness in his fingers, I think Mum held on to the paramedic’s words and felt sure that he would be fine.

I had to go back to university, but Mum assured me that she would call when they knew anything. It was the following week that I got the call from Mum suggesting that it could potentially be quite serious. The results from the scan showed Dad had a lesion on his brain and they needed to consider if it were cancerous.

At the time I was pretty optimistic about this news as I thought that it was probably benign and even if not there were so many treatments for cancer and so many people now survived so he would be OK.

It took several weeks for Dad to have a biopsy to help get a formal diagnosis and was then allowed to come home and rest while we waited for the results. After the initial seizure he was signed off from work, which he wasn’t happy with. He was a telecommunications engineer for BT and had been with the company for 40 years, so he was constantly busy and was very much a handyman. He was also a keen cyclist so being told no physical activity also frustrated him.

Dad was the one to tell me the biopsy results. It was a tumour and it was too far into his brain to be removed. The tumour was categorised as a grade four glioblastoma multiforme (GBM), a very aggressive type of tumour, and he would need intensive chemotherapy and radiotherapy to slow its growth. When he told me this I was still optimistic that he could beat this.  It wasn’t until I Googled GBM that I realised the chances of him beating it were slim.

I stayed with Dad during many of his radiotherapy sessions and we chose to use the time chatting about anything and everything. Not knowing how long we had left together was a very daunting feeling.

Dad had a number of complications during this time, an internal abscess that had to been treated by an operation, blood clots, a chest infection and then, in his final weeks, a bleed on the brain.

By the time I went back to university in October, Dad had deteriorated and was bed-bound on occasions. He had also become slightly confused at times and was struggling with his speech. He was reluctant to see visitors as he found conversation difficult and he just didn’t want people to see him like this. Mum was amazing. We had a hospital bed at home for the last few days and she was always there looking after him.

On the 3rd December 2016, Mum woke to find Dad slumped in the bathroom, having experienced another seizure. He was rushed to hospital but the seizure had been significant and so there was nothing more that could be done for him except to make him comfortable.

I got the call telling me to get to the hospital as it wasn’t looking good for Dad and they didn’t think he had long left. My aunt came to pick me up and we rushed to the hospital, but Dad died before my sister or I could get there to say our goodbyes. However, from my point of view, this relentless cancer had taken my Dad long before he died, and so the thought of not being able to say my goodbyes was made just that little bit easier.

It has been just over a year since he died and we have all tried to get on with our lives as he would have wished. Dad was so accepting of his illness and he was so strong in dealing with it. I’m due to go into my last year of university and my sister is getting married in 2018. We will never forget Dad and I feel happy knowing I got to really know the kind-hearted and fun-loving man that my mum fell in love with over 30 years ago. 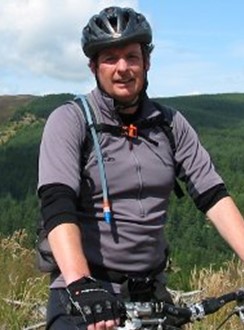